I was in the water around 9 am and began searching for signs. I paddled around some pelicans dive bombing but couldn’t find any gamefish under them. I then began drifting looking for some deeper water. I don’t have a depth finder but the sun was high in he sky which allowed me to spot a steep drop off. I began fishing the area and picked up a 16 in trout pretty quick. I stuck around and grinded it out for another 40 min or so before I had a soft eat followed by an aggressive run. After a good fight I landed a 24in redfish in the yak. Now i knew I was onto something. With my spirits and confidence growing I quickly repositioned myself for the drift. Probably 3 casts later I landed another red, then another, just under slot. I proceeded to work this small little area for the next few hours and was able to pull in another slot red and another 17in speck. I caught a 3-4 undersized trout and 8 underslot reds, as well as missing a number of hits and losing a slot red. 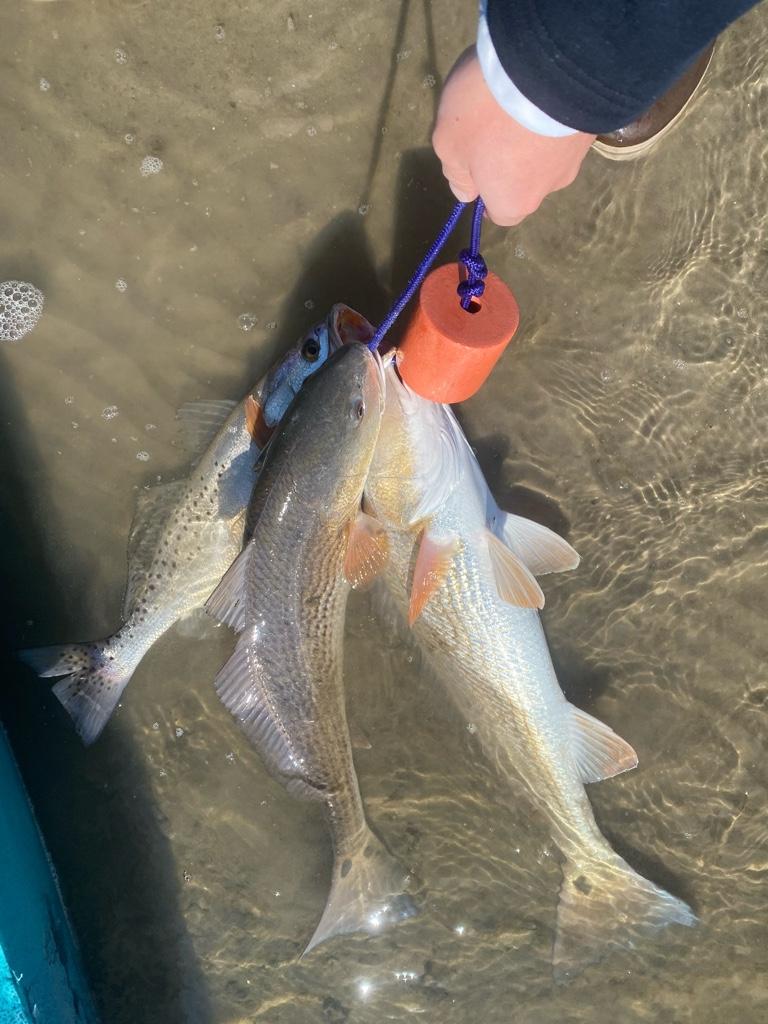 The action was fast and furious and you would’ve never known it. There was not a single fish sign all morning to show you where those fish were at, no bait, no swirls, no smell, no birds. On top of that I found that if I threw down wind and down current I couldn’t get touched. I had to position the yak nose first into the wind and current and either throw directly into it or quartering into it. What a great example to show that presentation can make or break your fishing trip.

All fish were caught on the Vudu Shad (mullet color) love that I didn’t have to change plastics once all day, these things are tough! Sorry for the lack of pictures, but the fish had my attention.

Ron Mc wrote:can't beat fast and furious - good report and thanks for the photo - should be a fishing report, though.

Also put the report in the wrong section

. Haha I’ve posted plenty of “fishing reports”. Nice to have a “catching report” for a change

SWFinatic wrote:Great report and display of perseverance. Good tip on casting into the current. The fish like to position facing the current so they can catch bait being swept down the current. In current being in the right position is key.

Thanks Finatic, the struggle is what makes the bounty so sweet. There’s so many things to factor in it’s easy to forget about something as basic as your presentation.

It makes "my heart soar lie an eagle" to see someone beat the odds like you did. Thanks for sharing (as I place another log onto the fire).

Kayak Kid wrote:Neither I, nor the fish liked cold weather fishing very much. I usually stayed near the fire on wintry days.

It makes "my heart soar lie an eagle" to see someone beat the odds like you did. Thanks for sharing (as I place another log onto the fire).

Haha thank you for the kind works KK. I too am estates to beat the odds, lord knows I’m putting the time in. I don’t blame you, I hate the cold myself and can’t wait for spring!

Your reports are entertaining and full of good advice. The photos are great. In our age of Covid, you lift us up by our tattered wings and give us hope. We salute the Yak Boi.

And when you start giving us GPS locations, I'll use my influence and law degree to legally change your name to YAK MAN. God bless us all.

P. S. Get a colonoscopy when you hit fifty.

Your reports are entertaining and full of good advice. The photos are great. In our age of Covid, you lift us up by our tattered wings and give us hope. We salute the Yak Boi.

And when you start giving us GPS locations, I'll use my influence and law degree to legally change your name to YAK MAN. God bless us all.

P. S. Get a colonoscopy when you hit fifty.

DD thanks for the kind words and your ever entertaining comments. I’m glad there are people that enjoy the reports that aren’t able to get out for one reason or another. My hope is that sometime soon, hopefully before summer we can all get this vaccine. I’d like a trip out with the old salts of the hobie navy; maybe you can get those GPS coordinates and I can hear all yalls fish tales. Until then I will keep plugging away and filling solid reports. As for the colonoscopy... I don’t have much input on that, other than my father has told me to avoid Dr. Coldfinger.

Before Hobie yaks there were Hobie 14, Hobie 16, and Hobie 18, sailing catamarans. The first time I crossed onto the Lake Grapevine dam, I was introduced to a view of almost the entire lake. That view was also my introduction to several small unique sail boats, that were seemingly involved in a race. During my many previous sailing experiences, I had never seen a wind powered boat move as fast as those...,and leaving a rooster tail of water in their wake.

I purchased my first Hobie Cat five days later. During the following years, I owned and raced all three of the small 'Cats' that Hobie designed and built. I loved mono hulls, and still do, but could never again go back to owning one.

When Hobie came out with a sail for his peddle powered kayak, I immediately test sailed one. As a peddle powered yak, it served it's intended purpose exceedingly well. In sailing mode, not so much. The ten to twenty knot winds that are so prevalent on the Gulf Coast were well beyond the boat's capabilities.

I really got excited when Hobie put the 'Adventure' on the market. I actually drove from Houston to Corpus Christi to purchase one. However, adhering to the old adage, 'try before you buy,' I did so. And, what a disappointment that boat was. The boat was completely un responsive to the helm when sailing to windward. Peddling was necessary to tack. I considered it to be a fun craft if relegated to a small light winded lake.

Before Hobie's venture into sailing craft, there were Hobie surf boards.
But's another story for, perhaps another time.

Like you, I got crazy about sailing back in the 80s. I persuaded 4 of my friends to join me in buying new Hobie 16 catamarans. I got the Tequila Sunrise model and sailed it hard for 12 years, mostly in Lake Conroe before it got built up with lakefront houses.

My big thrill was to snap myself in the cabled "BUTT-bucket" hanging from the mast top. Then we would "fly the hull" on a long beam-reach and pray I didn't get wrapped around the mast during a capsize or "turtle." Ouch!

Those were the days of wild youth. Now I go fishing and try to keep the skunks at bay...

Totally okay with the move by CCA. I didn’t enter […]

Even if it does affect the fishing this summer, th[…]