By hogflyer -  Sun Sep 15, 2019 12:20 pm
-  Sun Sep 15, 2019 12:20 pm #2292800
Looking to get into a Coosa or Liska kayak? both look good for small rivers, ponds, creeks, seems the coosa rides little higher in front incase we get into heavy waves or get caught on lake during a storm. Going to take one out next week when we can find some time. Not into long marathons of paddling, just early morning, or late at nights crappie action!
Work Lake Somerville lots, like the back creeks, less wind, less people!

Any comments? or suggestions for a better rig? Im 6ft, and weigh 235, so no little rigs for me!

By Ron Mc -  Sun Sep 15, 2019 3:58 pm
-  Sun Sep 15, 2019 3:58 pm #2292806
the Coosa is the best river SOT kayak I've ever seen, maneuvers and handles great. Spins easily.
Neither boat looks terribly efficient to paddle, and what I've read the Liska has a deeper sharper bow that helps it track better and probably handle wind better, but makes it much less desirable in the river. It doesn't guide over objects (rocks, logs), but hits them and stops, also making it tougher to portage.
My buddy took his Coosa once to the coast - and never again. 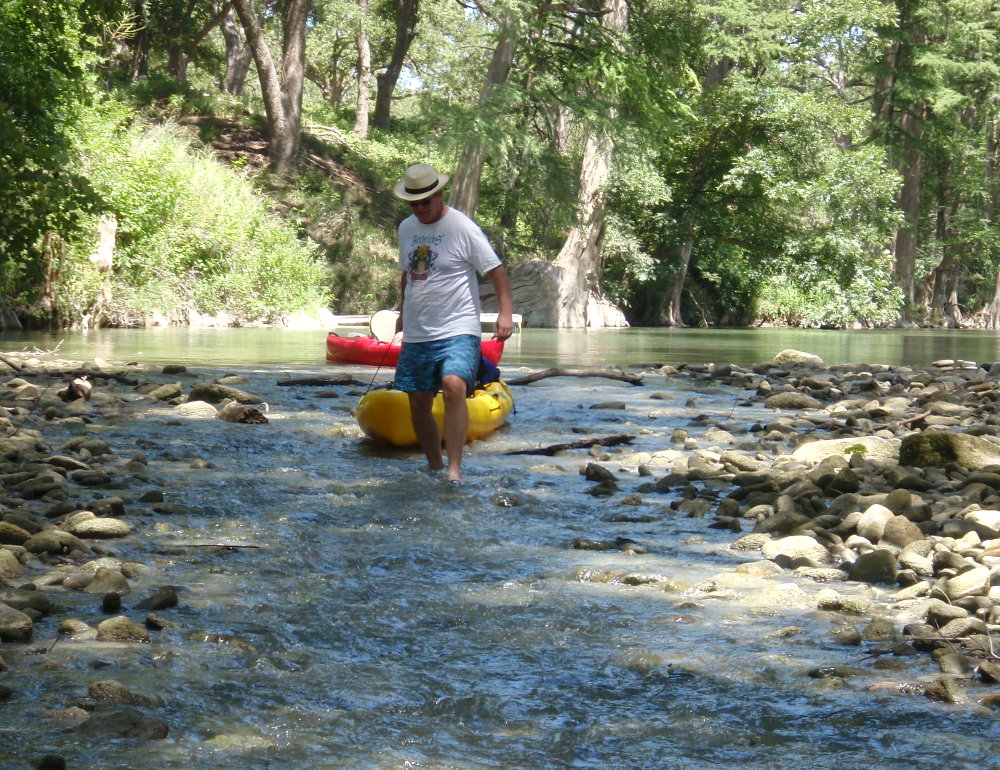 and here you can see how much more freeboard it has than a Tarpon, Redfish or Kahuna 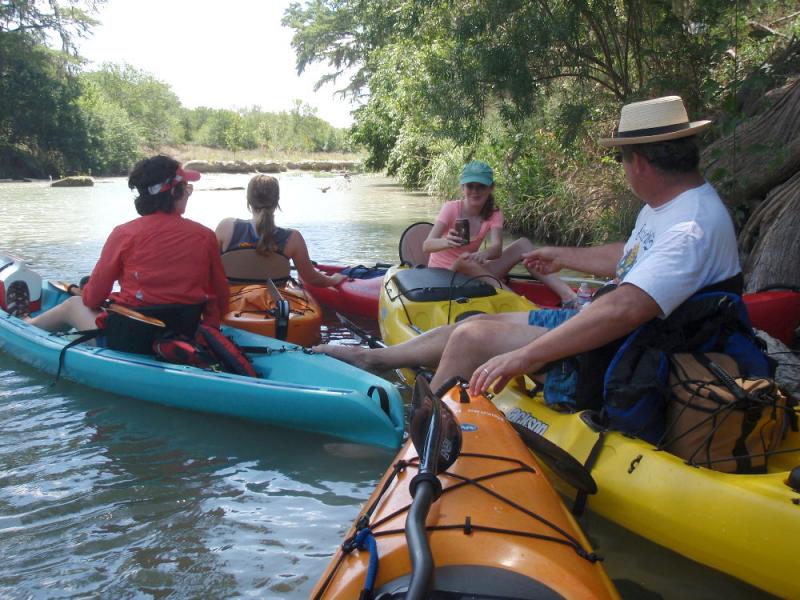 If a drive east of San Marcos isn't out of the question for you, TG Kayaks should stock both boats, is a livery right on the San Marcos River, and should be able to demo both, probably any day. Call Duane there.

You can turn it into a great BBQ run, with Luling and Lockhart both on the way.
The day my buddy bought the Coosa, we took the girls paddling in San Marcos, ate lunch at Smitty's Market,

then demo'd 3 boats, the Coosa, Diablo Adios and KC-12

look what followed him home

The tandem lasted a year, then Steve let us borrow the Kahuna for my daughter over the next year, until his older daughter called it back home, and I bought my daughter the Redfish10.
Along the way, the Redfish10 has been improved for the coast - it served my now-grown daughter well at the coast - and has made a good borrow boat on a couple of large-group, long-weekend trips and campouts. It's also the most watertight boat I've ever seen - even my Tarpon picks up a little water over a week of paddling, through the lap hatch seal.
I've taken the T160 on long Guadalupe floats without a complaint - it floats really shallow, and the rudder works, though in general, the Redfish10 is a better river boat, even for grownups.

Stevo has long been boat-rich. That blue Kahuna was mothershipped a lot (shuttled in a powerboat), and with Steve fishing was photographed in a couple of Phil Shook articles in 1994, Parks & Wildlife, and FR&R - along with our guide buddy Tim poling his Majek.
Steve added an Emotion Fisherman shortly after, which I borrowed a lot after he added the yellow Malibu-X-Factor in the photo above (about 2002). The 14' Emotion Fisherman is really a great flats boat with the exception a giant floor hatch leaks horribly, so that sponging the bilge is part of every trip. Two years ago, he gave the Emotion Fisherman to our buddy Lou, and it's still going 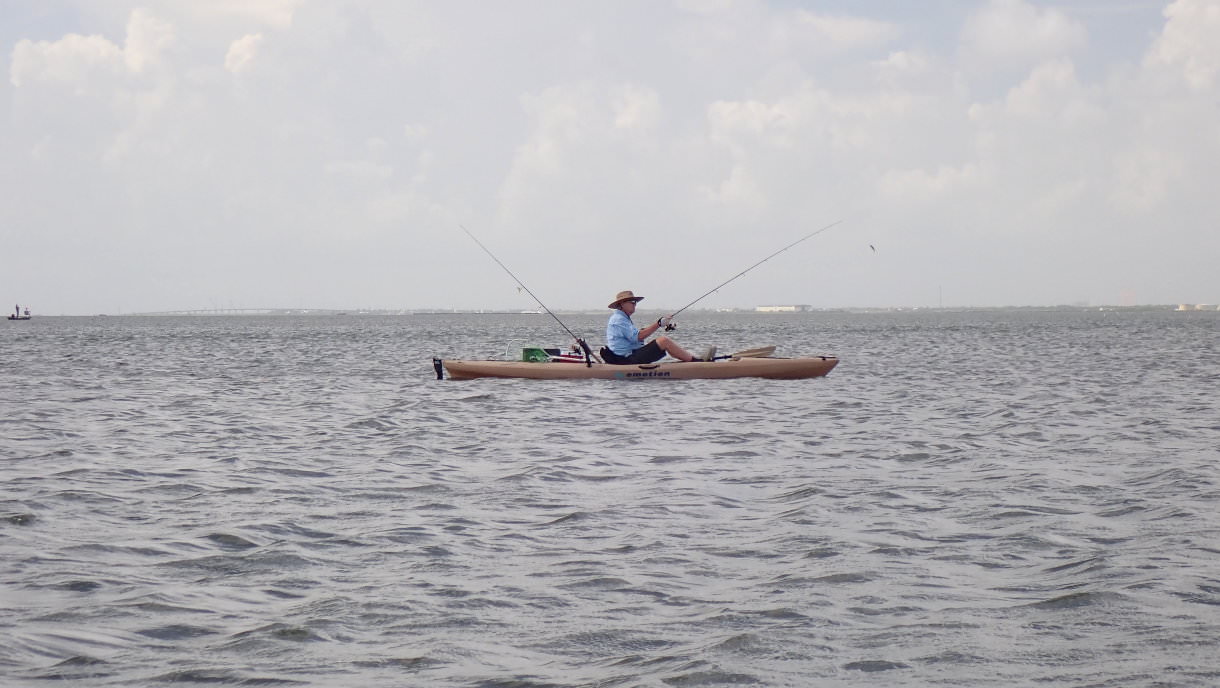 Steve originally bought the X-Factor when he lived in Kerrville and his daughters were very small - it was enough barge to take both girls and their golden retriever out at once on the Guadalupe. And it made many coast trips.
The X-factor is the only boat he ever sold, right after he bought the Coosa.
He added a Redfish10 for his younger daughter.

Stevo finally broke down and got the flats laser-beam, the Hobie Revo16 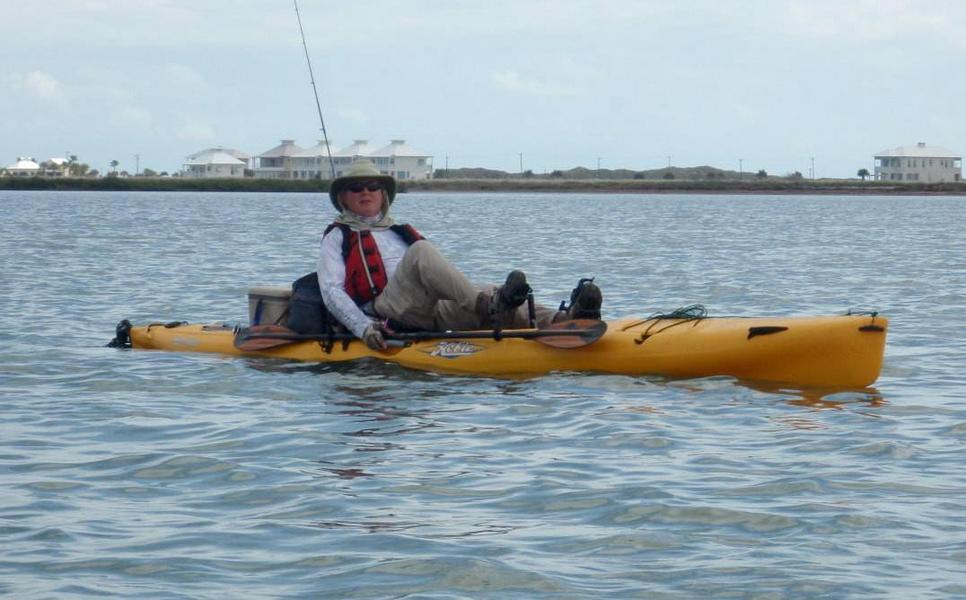 I added my paddle laser this year, a used Kestrel 140SOT, and it's actually faster than the Revo, and so unstable you have to balance with thigh straps sitting still (or dangle your legs over both sides). It's the most amazing windproof boat I've ever paddled, and glides forever even upwind. And of course no rudder - you steer with the thigh straps.
I could also justify the 39-lb kevlar boat (half-price) as a great choice to mothership, can double that with the 45-lb Redfish10. 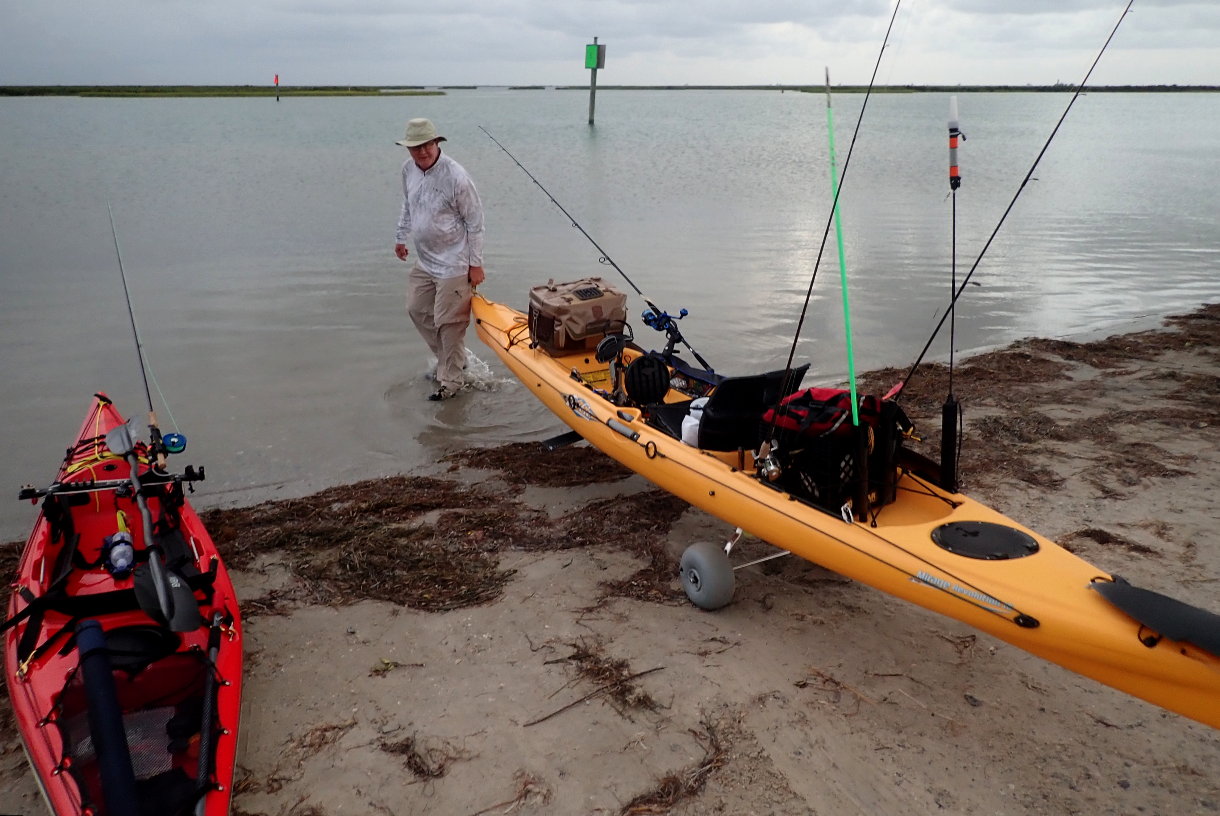 We have a 1st Nov week slated at S. Padre (actually Arroyo City) with a powerboat and those two kayaks, and Steve will be coming along to borrow one of my boats this time.
We've tried paddling from A. Thomae park launch, and while it's a nice paddle, is just too far to leave any part of the day to fish. What we've yet to try is night-fishing the Arroyo dock lights from a kayak, and will try that this trip, as well.

Sure wish I could have made this one:(