I'll ask the question a different way though here.

I've got a Heritage Redfish 12' paddle yak without a rudder.
After my last fishing trip of trying to go 6 miles and having to fight the wind to stay on course the entire time, I decided it's time to get a rudder.

So I bought a cheap rudder off of Amazon; it looked pretty solid (of course I've not got it in hand yet).
I've got my method to mount it in mind.

Now my big question is; how should I control the thing?

I saw some different options; 1 is to modify my existing foot rest rails to be mobile and tie the rudder directly to the foot pegs. The drawback though is I wouldn't be able to brace my feet anymore since the footrest would be free sliding.
Another option was to replace my footrest with one of the footrest's with toe controls. That looked like a good idea but I was reading some concerns about people getting the toe control seizing up after a few trips in salt water - that obviously wouldn't be good if I fish the bays.
The other method then that I saw, was the example in the pinned post up top, the guy looks like he's got a pulley and ropes connected directly to the rudder run up to about even with the seat. And I figure maybe he just makes broad course corrections as he goes but not constant adjustments.

So my biggest question for those with rudders in a paddle yak; Is there a big benefit to having a foot controls rudder vs hand controlled rudder? Something to consider - do you need to make adjustments constantly or is it more you can set the rudder when you start out and then don't have to make anything but minor adjustments (which could be done with your paddle).

Primarily I want the rudder for when I've moving between spots because I'm tired of fighting the wind. I do like to fish from the kayak though so foot control seems like it could be nice if I'm drifting down a river/ current. Note that I already have an anchor trolley and drift sock which generally keeps me pointed the direction I want to go; I just can't make course corrections without a rudder. How likely would you find yourself making course corrections while fishing though?

As for course corrections while fishing, I do it all of the time following the bank or the weed line. I can also make corrections for wind drift and paddle drift.
I honestly don't know how I managed before I had a rudder. It make life so much easier.

Now I need to figure out how to do a cable install! you might want to double-check dimensions on your rudder

on this post, you can find free Chrome and Firefox browser add-ons to see all the original photos everywhere
viewtopic.php?p=2248836#p2248836

and definitely use foot controls - should be no problem to find foot control that mounts on the same centers as your foot peg bracket.

Fishtolive wrote:Nice, can you help letting me know where did you buy the Delrin block in Houston?
Million thanks in Advance

the whole accounting is on the skeg thread, but I bought the bar from McMaster.com

Great place - I rebuild OPs valuable antique fishing reels, and have bought phosphor-bronze sheet there for making springs (also good for spindle drag pads to fix my dad's baitcasters), and many fasteners and tools. They deliver in 2 days.
However, for getting a handful of fasteners, Alamo bolt is near my office - much better than a hardware store for fasteners. In addition to your rudder control cables, you'll probably need a retraction/deployment lead for your rudder.
Here's my tarpon rudder - the green line retracts the rudder when you pull and cleat it, and when you release it, the rudder is deployed by an internal spring. I have those same Sea-Lect / Sea Dog foot controls and really like them.
Knarps are very handy for fixing and adjusting cable ends. If I need to adjust trim on my rudder, I just loosen the knarp, pull the cable, and retighten the knarp. I can do it all at the control end without having to mess with the rudder end.

I'm going to try to go cheap and just modify the stock foot peg brackets so they don't latch the peg (I'm thinking some sort of clip to keep the peg dis-engaged), and then run the rudder control to the foot rest. If I break the stock footrest with this idea; I'll be picking up that Sea-lect footbrace

Also, I've got a metal bracket that I'm hoping will fit the rudder. If not I'll need to figure out what delrin is and how to cut it!

Where did you get your cable? I assume it's stainless. I was just going to make a trip to Lowes or Ace and see what they had in stainless.

Delrin is acetyl copolymer - it's about the same strength as aluminum pot metal. It saws and drills easily. But it was a $30 plastic bar to build my bracket. The thing is, I did the math (bending calculations), and my design has passed the test for these five years. And I did it without drilling holes in the boat, using the existing wellnuts for the Native roller wheel. I loaned my daughter's Redfish to a buddy (check my Arroyo Report) and he managed to kick out the clip on one of the foot pegs. It was a booger, but with some close inspection and a wood wedge, I managed to pop it back in after the trip. So I'd assume if you push forward hard (hammer) on the foot peg, the clip will pop out and you'll have a free sliding peg.

I still say grab the cheap Sea Dog controller while it's still here. Everyone I know with them like them better than other foot controllers. These are getting harder to find, they retail for $75, and they're worth that.

If you want to look at other ways to mount a rudder, search kayak rudder gudgeon

Texas Kayaks in Boerne is a Heritage dealer - I know he's installed a few rudders on Redfish 12. Might call him for ideas.

Here's a 14 rigged with rudder and good photos
https://www.tapatalk.com/groups/hckac/m ... t2331.html

I didn't get around to installing it before my last trip; I was going to Jerry-rig a temporary solution with some ropes, but I ran into a problem with the mounting of the blade to the hull so decided I should fix the problem before making a bunch of holes in my kayak that would need to be patched up later.

My bracket for attaching the rudder to the hull works fine for the most part. The issue is it's somewhat short, so as I pivot the blade left and right, I can't rotate the blade much at all (blade has some large wings projecting from the side). They bump into the hull before you turn even 5 degrees...
If I raise the mounting bracket up enough so that the wings clear the hull, then everything should work fine, only it seems like my blade wouldn't have a whole lot of water contact. I think the blade projects maybe 6" past the bottom of the hull when I raise the bracket up so high.

So my questions;
Just how much water contact does your blade need with the water to be effective? i.e. how far down should your blade extend from the bottom of your Hull?

What would be a good spacer to extend my bracket out? I saw the derlin mentioned earlier by Ron, but not sure if I'd need to go so far if I could place a few plastic washers or something.

Finally - where do I find those Knarps at

Having a heck of a time finding stainless steel ones off of Amazon.

By TexasJim -  Sat Dec 28, 2019 6:32 pm
-  Sat Dec 28, 2019 6:32 pm #2296779
Chubs: I found cable stops at O'Reilly's Auto Parts. Two small, two medium and two large for about three bucks. They're brass, but the screws are zinc-plated steel. Whatever you use, make sure to replace the screws with steel, or you'll be wishing later you had. If the holes thru the side for your cable isn't big enough, just drill them out some.
I found a set of toe-control foot pegs and tracks on AliExpress for about $20. They work great, and are a lot easier to use than the sliding pegs I had before. Yeah, they're plastic from China, but guess what? So are the ones from your US kayak manufacturer.
For cable, I used 1/16" stainless, teflon-coated shark leader. Everything works fine. My rudder hangs about 6 inches below the kayak keel, and I'm sure shorter would work, too. Good luck, TexasJim

Chubs wrote:...
Finally - where do I find those Knarps at

Having a heck of a time finding stainless steel ones off of Amazon.

Was replacing rusty zinc-coated cable-end knarps that have been in service just about a year.
I ran across these really nice and inexpensive anodized alloy throttle cable clamps from accelerationkartracing 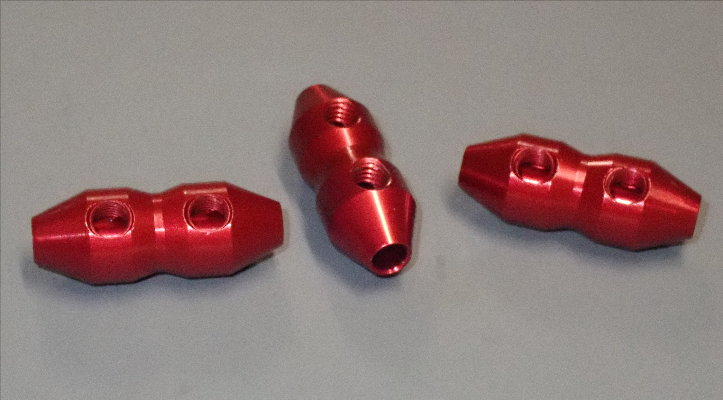 I replaced the black setscrews with M5 x6mm socket screws, A4 (type 316 stainless), which are impervious, and function as thumbscrews 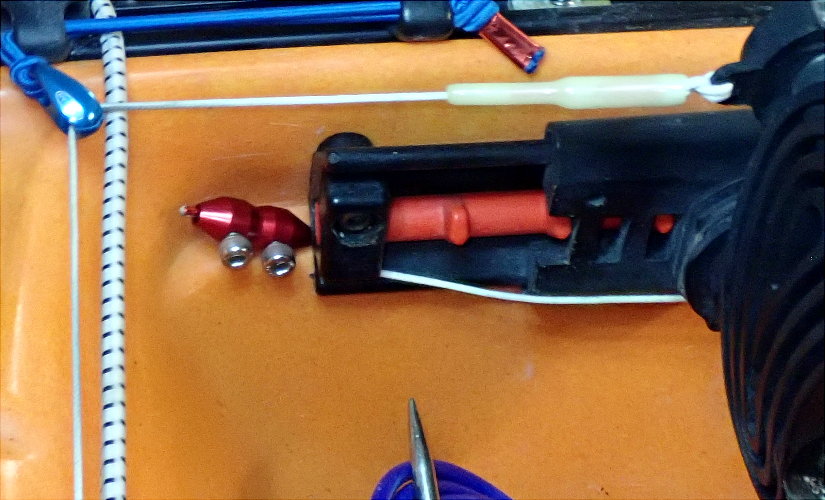 This puts a quick end attaching your rudder cable, and you can adjust steering trim by sliding the cable in the knarps.

In the old town family there's also the predator 1[…]