At the same time, my buddy Donny in Colorado had been jumping through his computer wanting to kayak the TX coast flats.
A few weeks out, Josh and I made the plan to invite Donny down to Neumie's Copano Bay digs and paddle a long weekend.

The named winter storm that shall remain nameless hit just before our schedule, but that wasn't stopping us. The deep freeze hit the coast just as hard as the hill country, and reports of fish kill looked devastating. Still without water at home, and only recently with power restored, I headed south to meet Donny, who had swept west of the storm, and beat us both down there.
Compared to the second hard snow we got the morning I packed out, Josh's digs sure look inviting.
They had the same water problem, and it would be two days until we got a hot shower, slim pickings in the grocery stores, but we made do 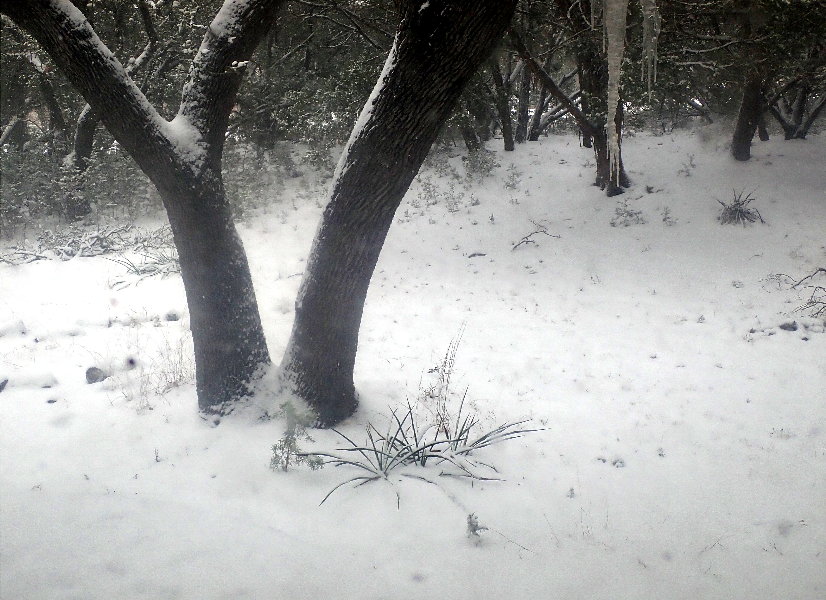 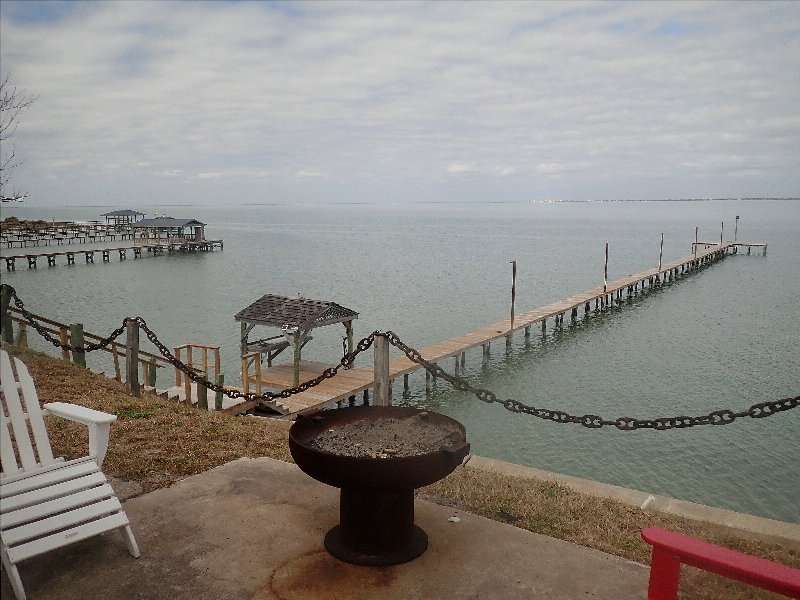 The next morning, wind shifting from NNE to light E, we were launching at Palm Harbor to cross Estes flats.
Note the size of the beach at Palm Harbor 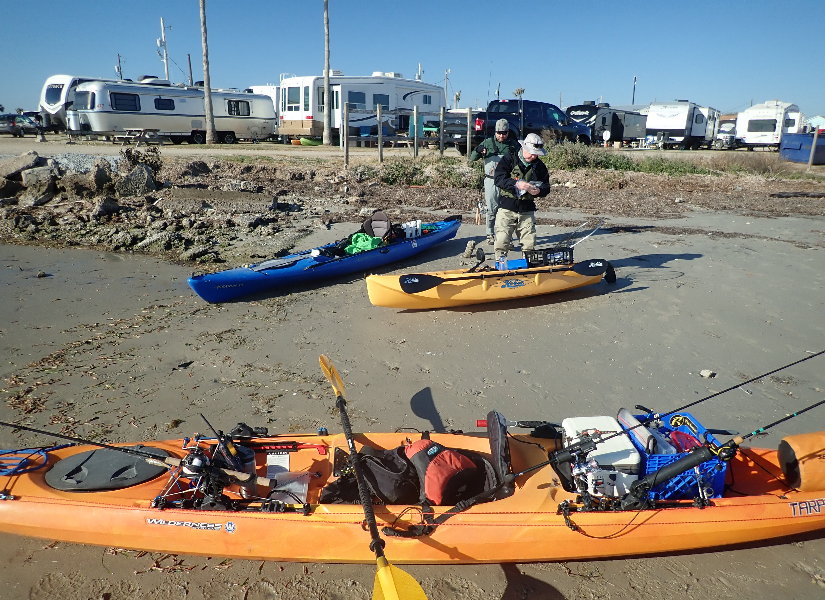 The goal was to get to Little Cut for the late morning incoming tide current.
With a week of beating NW wind, water level on the flats was the lowest either of us had ever seen. My "bright" call, let's head north first to Trout Bayou cut - when we finally ran out of water and had to stand to float our boats, could see Trout Bayou was bone dry. It was a really tough trudge through the mud to float and then drag our boats back to Little Cut. So we should have gone due east straight to Little Cut, but maybe paying our dues this morning paid off.

It was a huge relief when we got enough water to float again, and as we paddled the inside of the cut - right where they should be grazing on the rising tide - we crossed 300 redfish.
Here's Donny hooked up, looking from the cut to the inside pass 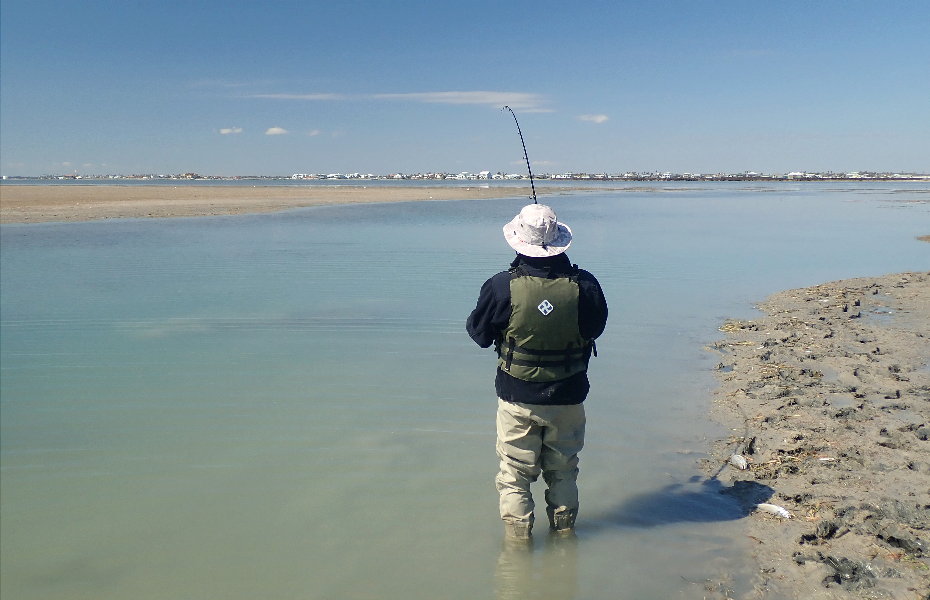 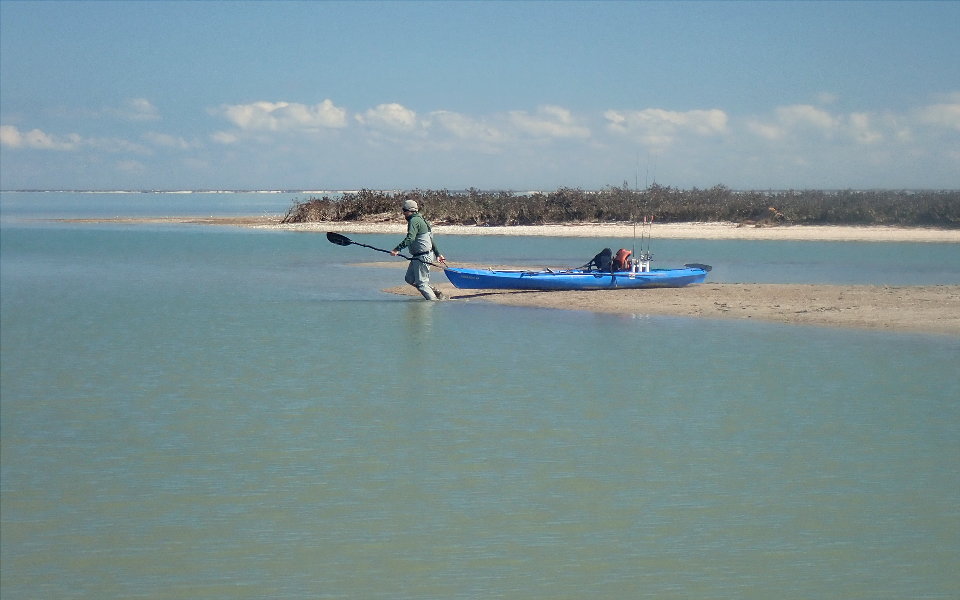 It would be silly fish catching. 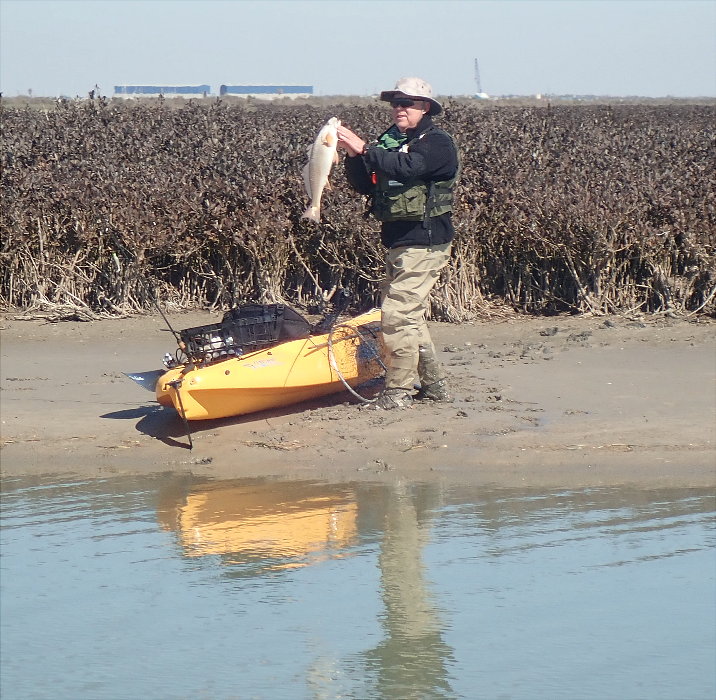 Donny was catching them on Vudu shrimp, which he handed me one and after a slot red, lost it from my paper clip. But the reds didn't care what lure, they wanted the mud balls from bottom-bouncing. 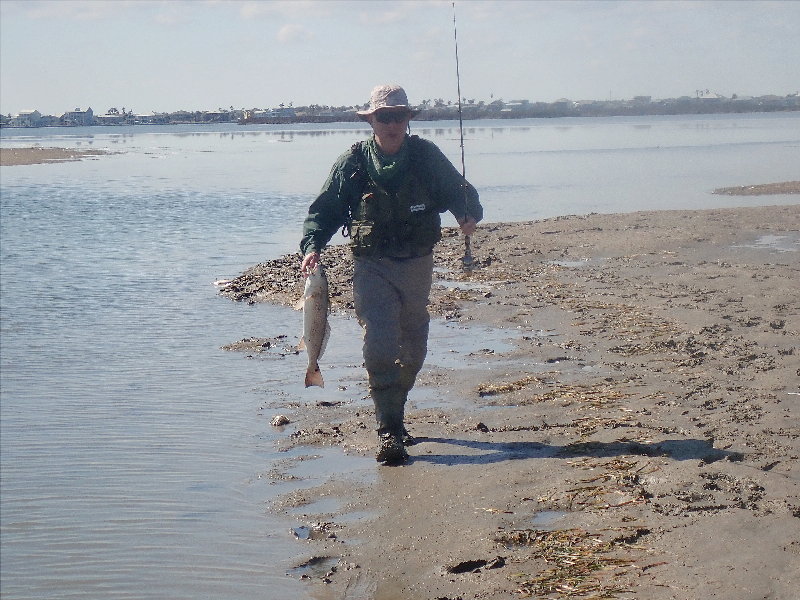 I did just as well on a pink Trout Support on weighted swimbait hook.
Almost all the reds were 18" - think I only caught two out of sixteen under that - I ended up with two slot fish to fillet, and Donny with a 3-fish limit. 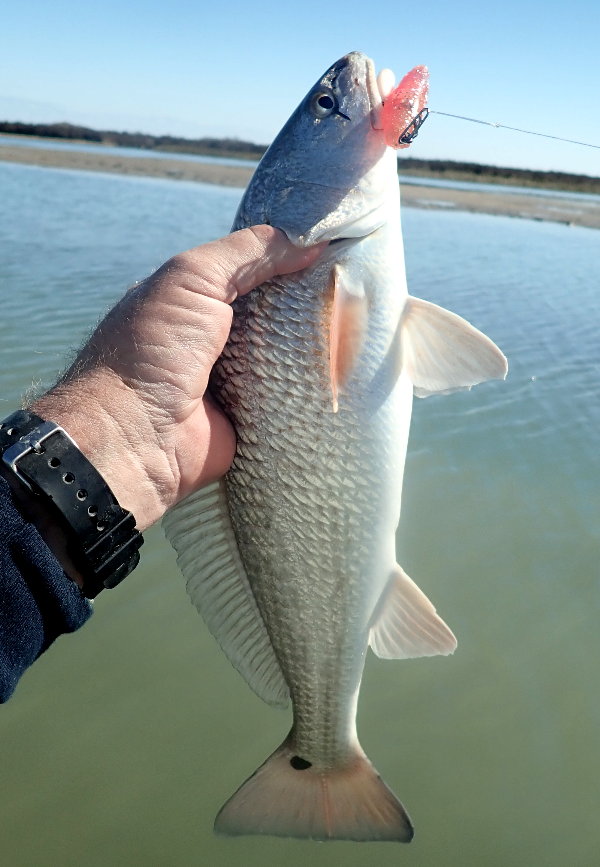 A fond farewell to Palm Harbor. 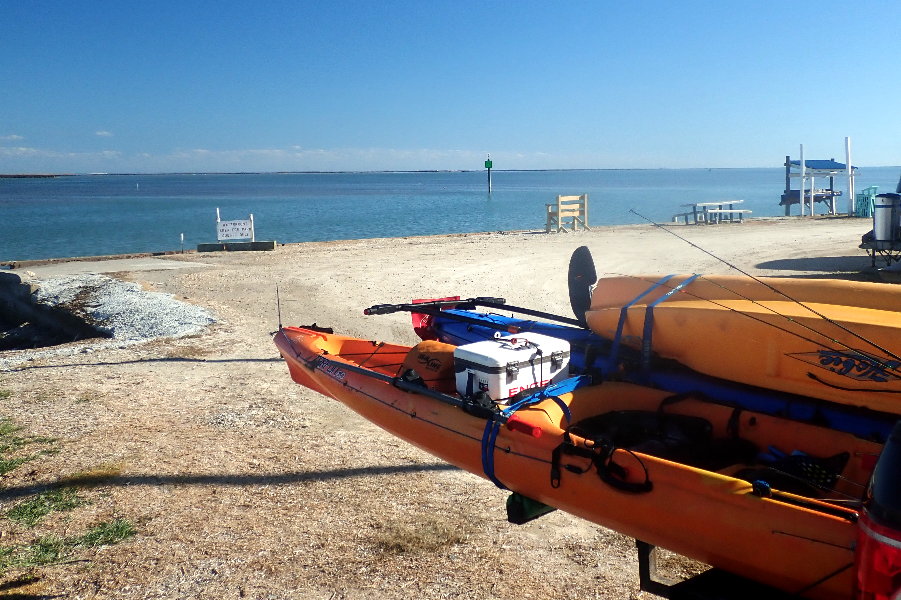 We filleted the reds "on the halfshell" - skin-on fillets for grilling. That night, Josh made us shrimp and grits, and we floated the fillets in ice water overnight, but I wanted to show you Sunday night's meal with massive grilled redfish fillets.
They were amazing, and picking the charred meat from the ribs was the best part. 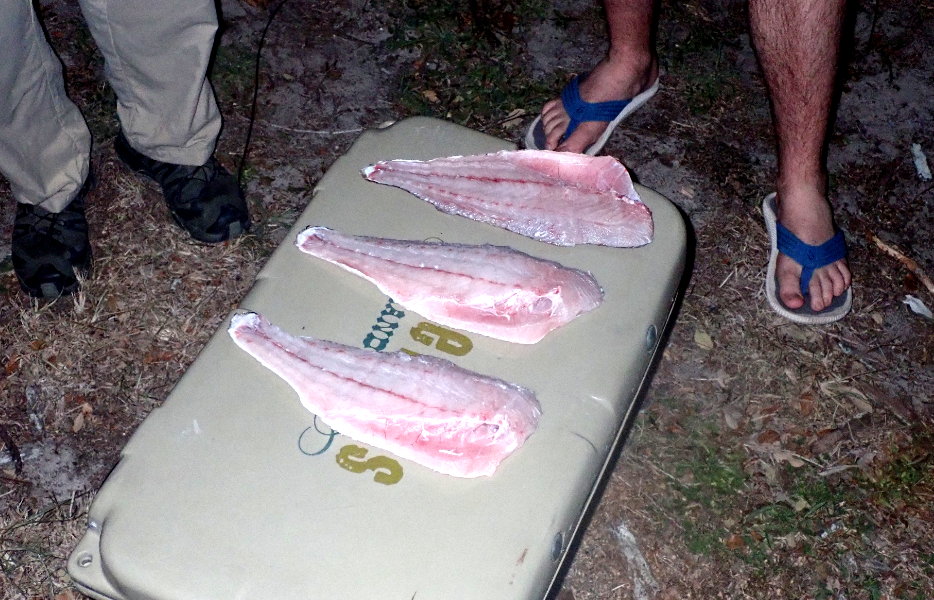 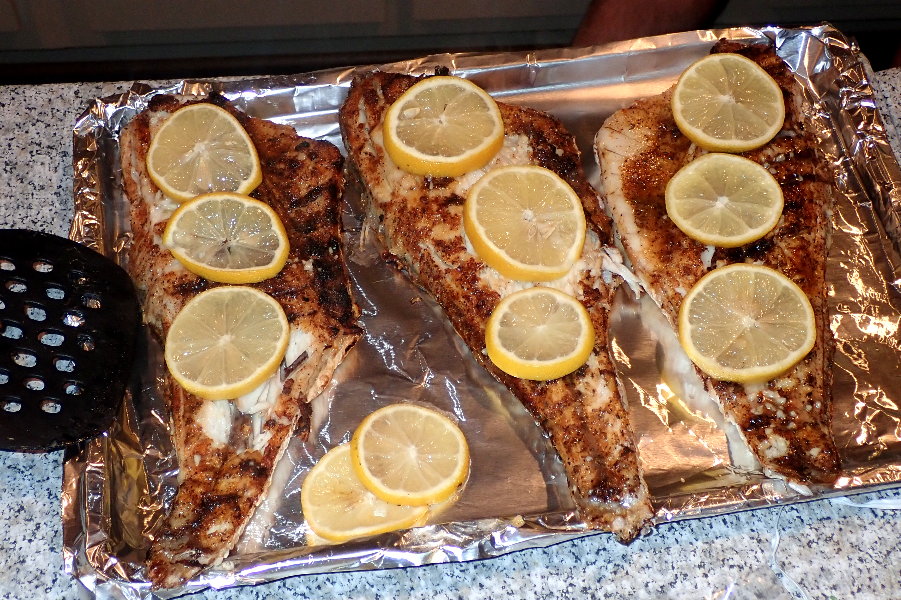 Since I'm here, another plug for Tobin and TSL grasswalker - this time on weighted swimbait hook. 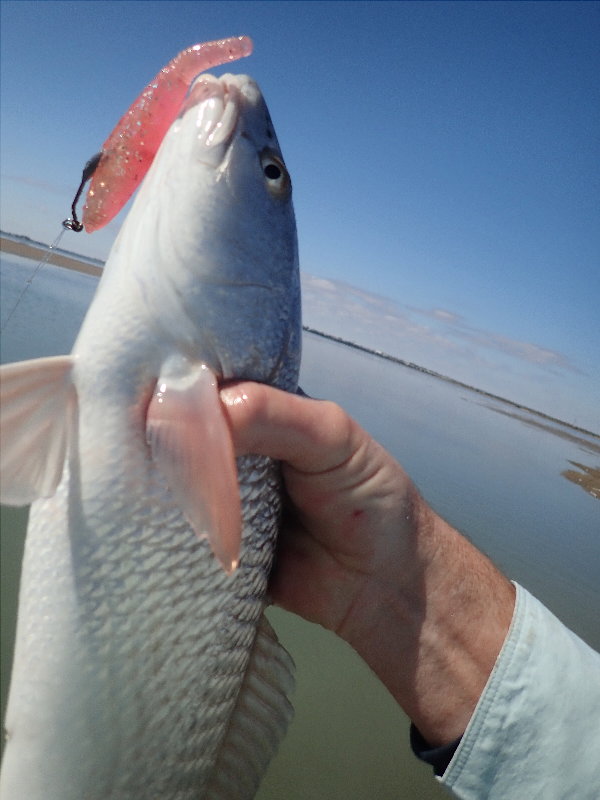 Donny gave Josh and me each really nice presentos.
(OK, already had the appreciation coin from the first time I took Donny fishing) 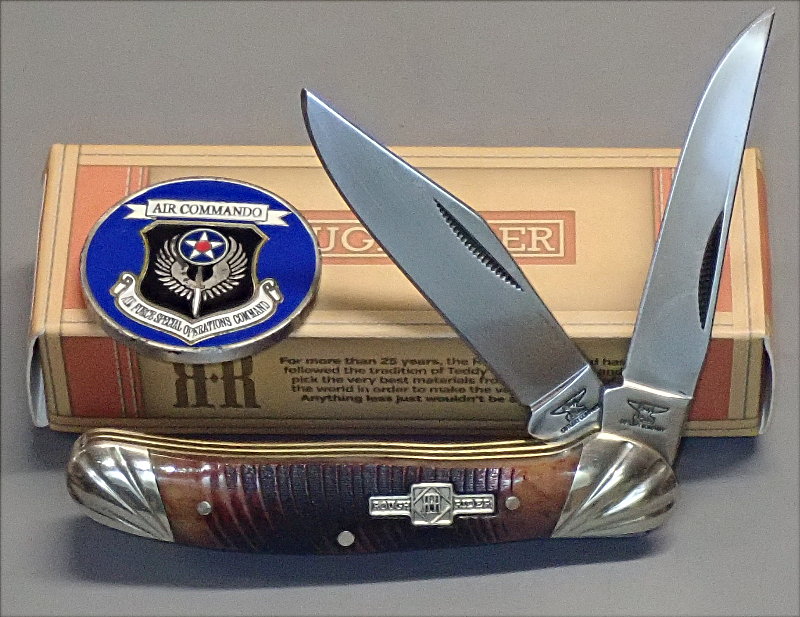 I hope your buddy Donnie realized how good our fishing can be without an Arctic blast blowing out our bays.

By Ron Mc -  Thu Feb 25, 2021 8:14 pm
-  Thu Feb 25, 2021 8:14 pm #2315471
Thanks DD.
I think Donny gets it, though he kept apologizing to us in g-mail for the next two tough days. I hope I got across to him those days, too, are all part of the fun.
In the end it was the tide I picked, Josh's good eye, and Donny's good fishing skills that combined to make the day so bang-up, in spite of the prior weather. We've seen redfish stacked up here many late winter and early spring days, though with more water, usually on the other side of the shoal and without the freeze, sipping tiny glass minnows. This day they were looking for any food the tide was bringing to them.
As Josh mentioned on his Estes report, the reds were all very strong.

After comparing notes, we put together we released 45 redfish and only a few of them were less than 18"

Not planning on going alone. Is there a closer la[…]

I'm guessing if we went fishing and discussed my c[…]

Yak Boi speaks the truth and we bonded quickly ove[…]