by mwatson71
Dandydon posted up that we (Dandydon, Shoffer and I) were going to fish Sea Isle last night and what a night it was. Light wind, decent but not terrible current, and no powerboats to be found.

We launched just past 11p and I think Shoffer and I each had a keeper speck within the first ten minutes maybe. Lots of undersized trout were caught once again. I think there should be an exception to the 15" rule and you should be allowed to keep one 12-14.9" trout if you have mortally wounded it in the catch. I hate watching a 14" trout float away upside down.

So we cruise through the canals just catching fish and split up as usual. I fish Sea isle a lot, but I found a light last night that I don't recall seeing before. As I pedaled closer, I thought it looked like a good place for a red to hang out. So I flipped my Vudu shad in between the light and the bulkhead, gave it a couple of bounces, set the hook, and reeled in my 20.5" red. A few minutes later I was back at an overhead light that I fish quite a bit that's usually good for a keeper speck. Toss the Vudu and the line starts screaming. I tighten the drag a bit and start to bring it in. Big red. As I get it near the yak it decides it has more run in it and takes off again, this time wrapping me in a dock piling and cutting me off on the oyster/barnacles. Bummer.

I radio to the others that I now have two specks and red in the bag. Shoffer has three specks at this point I think. Shoffer replies, "now you just need your flounder." Hmmm...

So I start throwing at docks trying to find my flounder. I manage to catch a few more rat reds and a bunch of dink trout.

Don has left the canals for the pier, where he radios to us that it is on fire. I head over while Shoffer continues fishing a couple of surface lights. When I get to the pier, they are popping everywhere. I quickly catch about three reds in the 15-17' range. And then a few dink trout. And then lose two solid trout (see post from a few weeks ago where there was discussion about lazy hooksets and bad habits after catching dinks all night and the quick release). The pier yielded another keeper speck for me so now I am at three with a red. I try to move to the marsh and grass line to find my flounder but it was too shallow for the Hobie.

I decide to cruise over to the boat lane that comes out of whatever subdivision is east of Sea Isle and see whee my flounder is to be found. It is lined with cinder blocks and oyster, and then sandy bottom. First cast, rat red. Second cast, 15" flounder. Mission completed.

Don radios that they are heading in and I decide to head in as well. It is after all, about 8:15a now. I have my slam and they have trout limits.

Side note: Impulse was right about the mosquitoes. Holy cow. Between the recent rains and lack of wind last night they were swarming. Even after being sprayed down with Backwoods Off! they would swarm around your head pestering the heck out of you.

by TxAquatics
Nice outing and congrats on the slam. I was over a Pirates bay a couple of weeks and ago, had a great time, not many keepers but fun none the less. A little behind on posting. I sent you a pm, by the way.

by Dandydon
Great and entertaining report, Capt. Watson!
You used to work your ass off fishing with the Hobie Navy in your non-pedal Wilderness kayak. But now you've got your Hobie Revo and you work at catching Grand Slams.

Yes, Mike and Shoffer caught their legal Trout early while I was releasing about 2 dozen 9-13" specks that drove me nuts. They did that, too! I didn't land my sole legal 16" Trout until 4am! And then I headed for the lit up Sea Isle pier where I saw silver flashes & and big splashes in the end pier lights.

I pedaled in and fired my trusty white glow Down South paddletail. First two casts I hooked solid 20" specks but lost both at the boat. Then two 18"rat Reds that fought harder than any of my specks landed.

All of that activity and some lemon-filled donuts tired me out so I dropped anchor and took my famous long Man-Nap until Shoffer woke me at daybreak for more action. Note to self: need to invent a special "mattress topper" to lie on while napping on a Hobie yak. It's kinda uncomfortable in that cockpit.

I ended up with 6 legal specks because Shoffer gave me his limit of five. Thanks, captain! Fish fry tomorrow evening.

As Impulse warned, the baywater looked like ice tea with about 8" water visibility. As usual I had a blast catching loads of fish and keeping the Hobie Navy focused and effective. The big regret was that our esteemed Capt. Kickingback was landlocked at home. Looking forward to his return.

Tight lines to all who fish this hot Summer weather. For our group the nighttime is the right time. 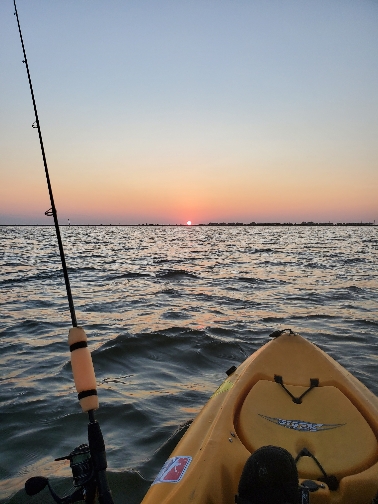 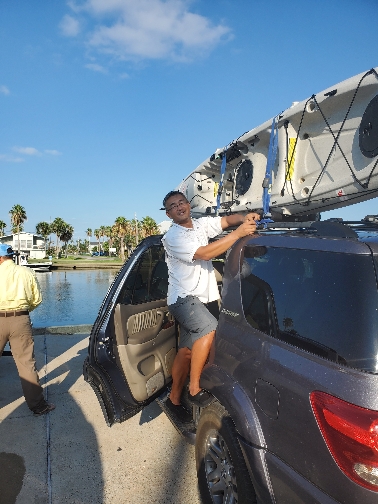 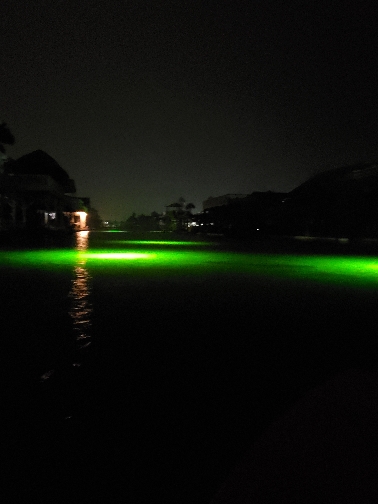 by mwatson71
Dang it. Seeing Don's pictures made me realize I forgot to take pictures of the fish that I told him I would take. Well, we all know what 15-17" trout, a 21" red, and a 15" flounder look like. I guess not everybody gets to see what they all look like together though. Heheh.

by Dandydon
Behold the deadly glo VUDU SHAD. It is durable and deadly. That accordion paddletail rotors through the water attracting all species of fish. Mike turned me on to them. 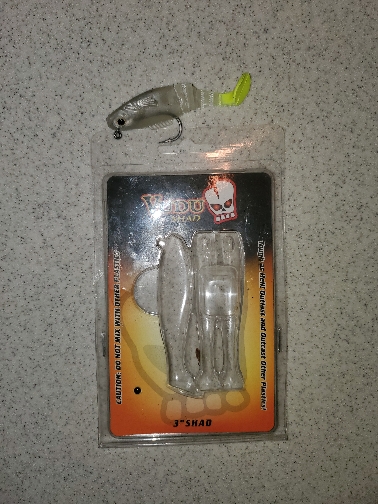 I learned with Alaska blackflies, 100% DEET is only so effective at hiding you - you need a cigar to top off the bug repellent result.

by Chubs
Great report guys and also thanks for the lures breakdown.
Good job on grinding out that flounder!

How difficult is the launch there? I thought I heard mention that it's chained.

by YakRunabout
Great reporting, guys and conrats on the slam and the fish action.
Also, nice pics, eventually (ha, ha). Night pics of fish are tough, also, well - there's fishing to be done!

I have been out some nights where I dreaded to turn on my headlight since it would show the cloud of mosquitos around me!

by kickingback
The Plastic Navy captains did a great job and I sure wish I would have gone with you knowledgeable captains for some good conversation and fun competing on catch and deciding where to fish. I miss those nights for sure.
This was an excellent report from both you Michael and Don. Did Shoffer take pics too? We'll see. He usually has a couple taken.
Great pictures and makes me want to be there even more.

by Dandydon
Shoffer has been too busy to file a report, but he was my Hero of the Day for giving me his solid Speckled Trout limit of seven, I mean five fish. God bless the junior captain! Between Shoffer, Watson & myself we probably landed 90 specks on this trip. I got real tired of all that DINKAGE.
I'd rather just catch 10 total,, and cull down to five.

About 3 hours ago I fried up those 12 Trout fillets for 4 people, battered in Panko/cornmeal with homemade hush puppies and fresh green side salad. Dessert was a Marie Callender hot apple pie topped with Blue Bell Homemade Vanilla ice cream. Bingo.

My guests waddled out with big smiles on their faces. Hard to beat fresh-fried specks.

Dandydon wrote:Shoffer has been too busy to file a report

Yes, work has picked up a bit, but always Happy to share the bounty, and I still have so much fish from the Port Mansfield trip so it was no sweat.

Watson definitely slammed it up nicely. I must’ve seen 20 gar that night in the lights. Sometimes there were two in one light. Most of my fish were caught on a silver patterned Lele. It’s fun to watch the trout chase it.

Dandydon wrote:...Between Shoffer, Watson & myself we probably landed 90 specks on this trip. I got real tired of all that DINKAGE. I'd rather just catch 10 total, and cull down to five.

On days like that I like picking up the ultralight and getting the most fight, even out of the dinks, the croakers and the sand trout.

by Dandydon
I like going light, too, Impulse, especially when the fish are small and feisty. For nighttime I've been using a sweet lightweight rod and spinning reel outfit made by Cadence. It functions smoothly with a good drag system, plus no backlashes to clear in the dark.

As for dining, I prefer the smallest specks and Redfish allowed by law.

by Johnny5455
Lots of fish caught makes for a fun night. A limit of fine tasting spec's is an impressive accomplishment.

Even more magnificent than a limit of whichever game fish we chase is the Texas slam. Great job getting it done sir!

Thanks for sharing guys!

Sent from my SM-G955U using Tapatalk
All times are UTC-04:00
Page 1 of 1
Powered by phpBB® Forum Software © phpBB Group
https://www.phpbb.com/