Thanks for the launch advice. I had no idea Jamaica Beach and Pirates Cove has public launches. Thanks! We also lost part of one of the trouts to the man in the 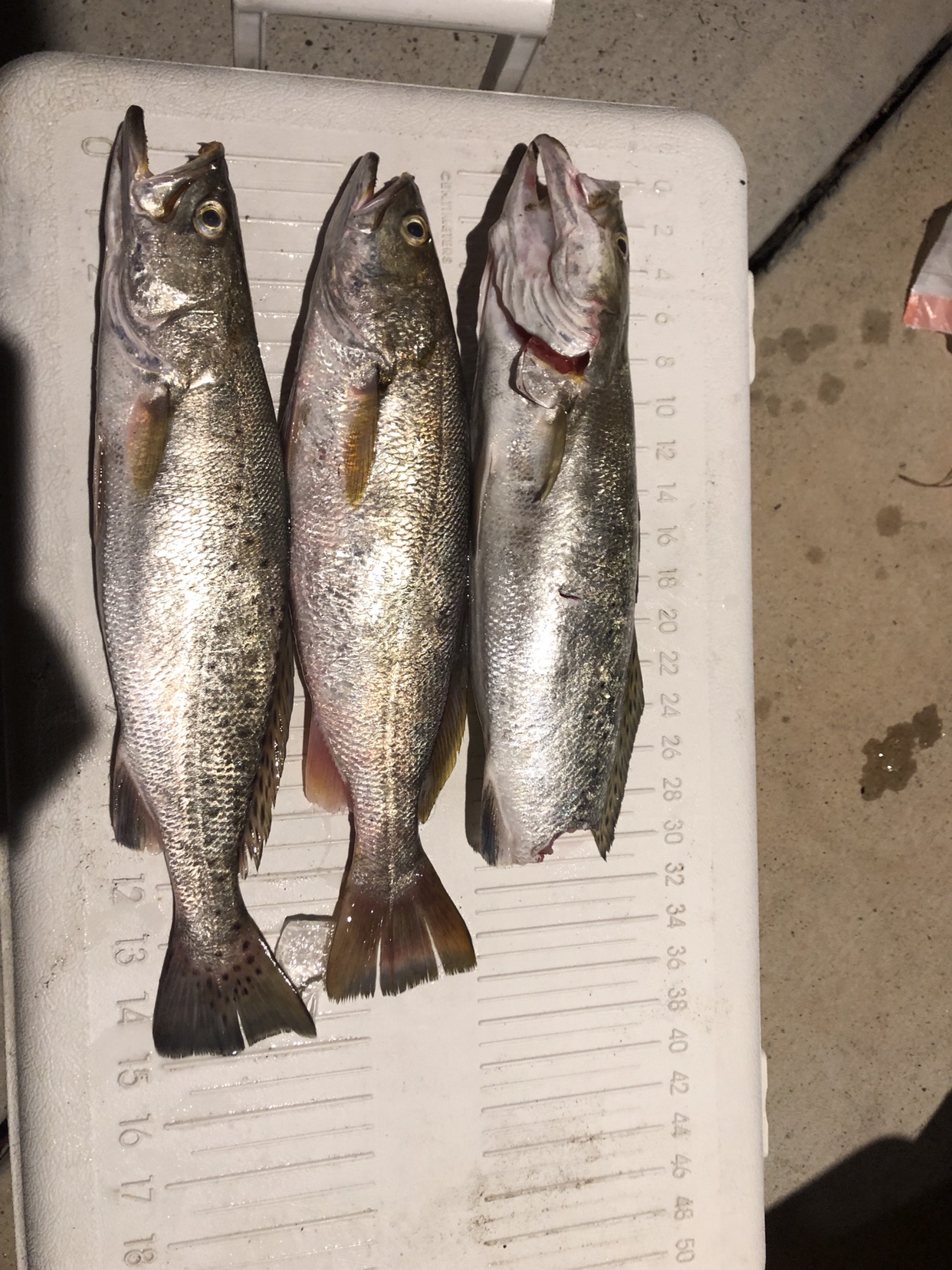 By Ron Mc -  Wed Jun 05, 2019 8:39 am
-  Wed Jun 05, 2019 8:39 am #2287127
Night-surf-fishing is manly sport - the only fixed reference point is your Coleman lantern on the beach. Steve's brother Dennis lived in Rockport in the 80s - with him and our guide buddy Tim, we hit Cedar Bayou more days than you could count. Dennis tells a story one night of blackwater in the surf. A shark attacked his stringer and demolished it, so he starting throwing newer fish on a new stringer over his shoulder. After about 20 min, one of the fish made its last kick on his back, and the hair stood up on his neck.

Yeah! I thought so too. There were at least 2 circling my nephew’s kayak. He would take the stringer out of the water and the sharks would disappear. As soon as he put the stringer back in they would reappear. They were just little ankle biters (1 1/2 to 2 footers).

By kickingback -  Sun Jun 09, 2019 1:38 pm
-  Sun Jun 09, 2019 1:38 pm #2287311
We went out last night to Sea Isle and the bait was so stacked up that you could see where the predator fish were by the bait balls busting all over. When the bait started busting top we threw lures into the bait ball and got hook ups or strikes. I caught 1 keeper trout. Shoffer caught 2 keeper specs and Watson wound up with 5 keeper specs. Don's rudder busted and he was out of commission for the night. Fun night and morning all the same.

here's a video of the bait. You had to listen for the bait busting and move toward them and cast. Everywhere you went this is what we saw...

By Dandydon -  Mon Jun 10, 2019 8:52 am
-  Mon Jun 10, 2019 8:52 am #2287354
Yes, my Outback rudder somehow broke off its mount, so I stayed onshore near the Sea Isle ramp. My companions Shoffer, Kickingback & Watson launched their yaks & left me one bullet (in case the marauding Indians showed up).
Of course I caught no fish, but did enjoy an epic Man-Nap on the grass under a palm tree. My buddies all came back with a few legal specks, but Watson dazzled with a stringer of five trout to 21".
Now my rudder is in the hands of the experts at ACK. It's Hell to be rudder-less, men! Tight lines & good rudders to all.

It was really hard to compete with all the bait we saw. I have never seen that much bait in the bays. Guides have been making the same comments on Mickey Eastman's show. I have seen shad being blown up in the canals at night, but not that much, and this was in Mid-April two years ago:

Capture.JPG (38.38 KiB) Viewed 2291 times
Things are behind it seems. Maybe some hot weather and lower oxygen water will lead to a shad kill event, which might improve the hook up ratio, although Watson appears to need no such help.

Second, I have never fished such strange conditions. The shad were literally jumping into my kayak. At the end of the trip, I must have dumped 50 shad out of my yak. That doesn’t include those that jumoed in that I threw back into the water because it was a little weird having tiny shad flopping around in your legs and feet. I will also add that my kayak got bumped several times by whatever was chasing them. Showers of shad would jump into the yak, followed by what sounded like rain drops hitting on a plastic roof, then a big “thump” on the bottom of my yak.

So in the canals, I threw mostly super secret tandem rigs. Hehe. I lost one of the Tsunami Pro holographics to something large. I am not sure what happened, but it took whole tandem rig. At first I thought it was user error and a bad knot, but my know was intact but the entire rig was gone. I can only guess that it broke the tandem rig at the loop. After that, I quickly grabbed a new rig with the TTF shad in glow. I managed to land a few keepers and a lot of small fish. Oddly, I caught about a dozen hardheads, with most of them foul hooked in the lower body right next to a pectoral fin. A couple hooked in the lip. I also caught about a dozen undersized specks, a decent sand trout, and an 18” red to go along with the 4 keepers from the surface lights in the bay. I only made it back into one canal and only just the tip of the canal. My first four keepers came from surface lights in the bay.

I tried to take a short power nap a/k/a Man Nap but the mosquitoes were buzzing all around my fave despite a generous dose of Off! on my neck and face. Ibwasn’t getting bitten, but the persistent hum of their wings was enough to keep me awake.

At first light, we made it over to the marshes where I tried to find a legal red to no avail. At this point I had switched to throwing a Live Target mullet on top water. I switched over to a white 6” swim mullet that looks like a grasswalker but has a tail on it. First cast landed the 22.5 inch trout. The next four casts resulted in four more bites but I couldn’t get one landed. I think I was pulling out of their mouths prematurely as I had it rigged weedless with a weighted hook.

The bite slowed and back to shore we went.

If anyone catches a tagged redfish that still has a speck rig with two Tsunami Pro 2” swim shad in its lip, let me know.

You obviously need some expert instructions on kayak Man-Napping, which I will gladly provide. While you were out gathering silver shad & landing fish, I was taking the ultimate Man-Nap back at the launch. Then after getting home, I went out to play 2 hours of disc golf.
Thanks for the detailed fishing report.

shoffer wrote:I have only seen sharks in the canals twice - both in summer. One was at the mouth of Jamaica's canal into the bay, and one was pretty far back in the canals at Lake Como/Watermans/Pirates.

It was really hard to compete with all the bait we saw. I have never seen that much bait in the bays. Guides have been making the same comments on Mickey Eastman's show. I have seen shad being blown up in the canals at night, but not that much....

We fished a storm tide years ago from Goose Island, across to Cedar Bayou - the airboat trails on St. Jo were deep enough for a power boat. There was bait everywhere, jacks and baby tarpon were in the normally skinny passes between the barrier island lakes, and tailing sharks on the flats.

Reply
Return to “Fishing Report”
30 May

I am right handed so throw and retrieve bait caste[…]

There aren't nearly as many BTB fishermen on the u[…]

I can think of one boat (Kazkazi Dorado) that come[…]

Anyone know if you can still launch at the end of […]