This trip was originally scheduled for July 10 but due releases of only 200 during the week I rescheduled for Sep 1 launch. I also rescheduled because I was planning on some high country backpacking in Colorado before or after and the winters heavy snowfall across the state still had most areas about 10k feet covered in snowpack.
I departed Plano Aug 30 and spend one night at Palo Duro Canyon State park then drove up to Chama the next day and camped at the small campground just up from Coopers so I could get an early launch. I got the boat pumped up, loaded and on the water by 8am. I had paid my launch fee and shuttle the day before. I wanted to get down to my favorite site that provides good hiking access to Gallina Peak which I climb several years back. I made the usual stop at the hot spring tub on river left and soaked for about 30 minutes. I paddled on down to the site and arrived about 10am, setup my hammock, cook table and rain cover over both. I gathered my daypack, snacks, water, camera and PLB then set off following the elk trails to the top of the canyon wall, about 750 ft up. Once on top I decided not to make the trek on across and up to Gallina peak as it was going to be a hot day and long hike. I took a few picture then walked along the rim for a bit then made my way back down.

This part of the canyon there is only one way back down to the water following the elk trail. Once the trail get down to height of about 100’ above the river it starts to splinter out and the brush get a bit thicker. As I was walking along making my way back to camp I spotted a large carcus through the brush. I made my way over and found the remains of a large elk and by the way many bones were piled up next to a tree I assumed it to be a mountain lion kill. Most all of the flesh was gone but looked to be within the past 3 months. I found all the bones you would expect except the skull in a 20’ radius. I kept looking for a skull but could not locate it so I headed to camp making my way through the thick brush, then only about 30’ of walking a found the skull with a 6x6 rack of antlers attached. WOW, what a find and it still had some skin on the front of it. I picked it up and made my way down to camp carful not get caught in the brush or stumble on the steep terrain. This is the same general location that one of my sons found a 5x5 skull and rack several years back. If you look at the terrain and the choke point where the trail comes down you reach the conclusion that this is a great ambush area for mountain lions. The elk get down and have no place to run and the big fellows with large racks just cannot run through the thick brush, putting them higher on the kill list.
While up on the ridge I did not see a single boat coming down the river. Later that afternoon back at camp one group of rafters came by and chatted a bit. They were the only other individuals that put in that day and the only ones I would see for the entire trip as they were going on down to Chama Wall and only spending one night.

Day 2: I took my time and sat out in my chair with coffee watching the stars before dawn. The stars were so bright and dense with no moon you could not detect any satellites but did see many shooting stars. Breakfast was bacon, eggs, toast, then packing up and strapping on the large elk skull. I needed to make sure that none of the antler points were touching the boat for risk of puncture or rubbing a hole. I did not expect any competition for campsites so paddled/floated my way down. The first rapid of the day is Aragon Falls which I stopped briefly to scout even though I have run it many times. It still pays to do a quick scout just to make sure you avoid getting hung up on some of the big rocks in there, I slipped right through without a hitch. My destination for camp would be a place on river right about a quarter mile upstream of the large group camp, Huckabay, I did pass the group I had seen the day before and when they passed me again they stopped for pictures of the elk skull. After setting up camp I took a long siesta in my hammock then had a lazy afternoon/evening enjoying the solitude.

Day 3: Packed up and on the river by 7:30, I wanted to get finished and then make the drive on up into Colorado and get set for some back country hiking the following day. About half a mile before reaching the Monestary I came up one a bear skinny dipping in the river. I could not get my camera out fast enough before he ran up the bank and disappeared into the forest. When coming past the Monestary there was a lady standing by the river with her binoculars and she said she just saw a bear and I told her I of the one I just saw also. I made the takeout by 10:30 and packed up by 11. A normally busy takeout with trucks and busses was very quiet. My truck was the only one in the parking lot and nobody else around.
Here are a few photos: 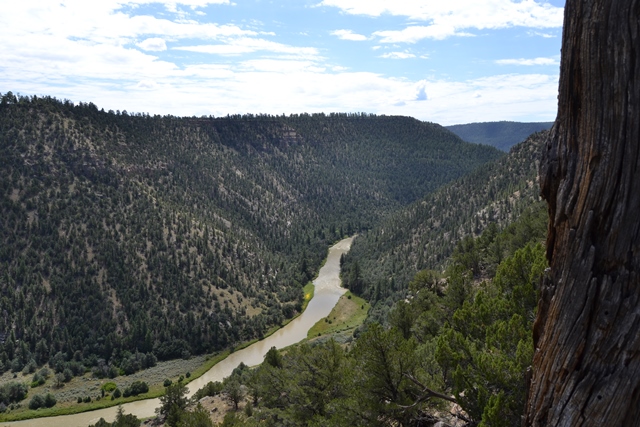 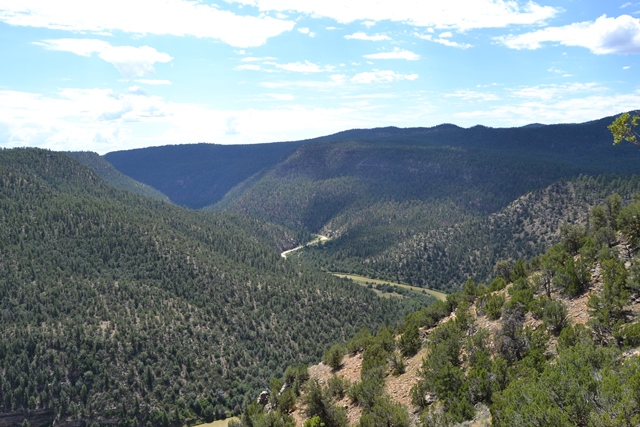 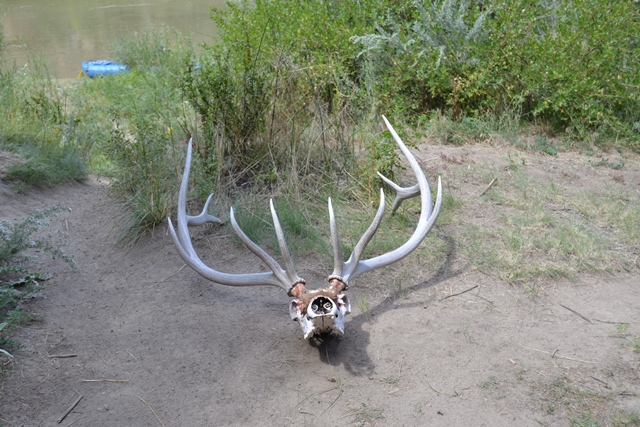 After I got it back to camp 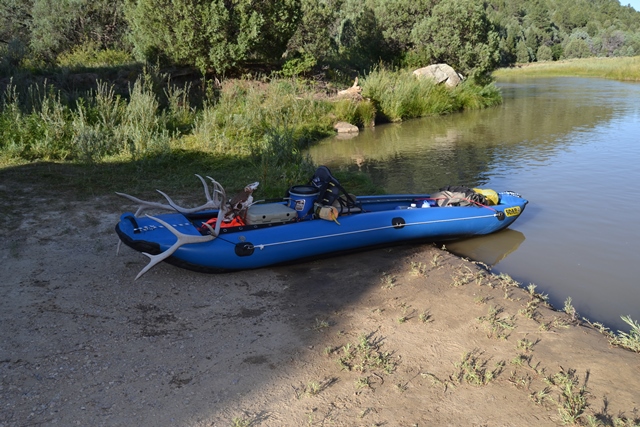 Loaded up to get it 22 miles downriver 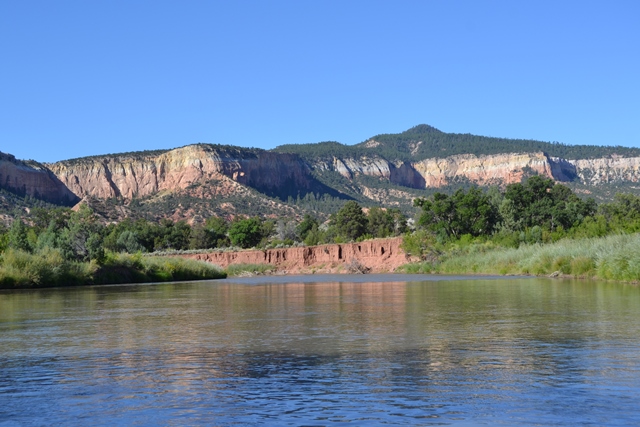 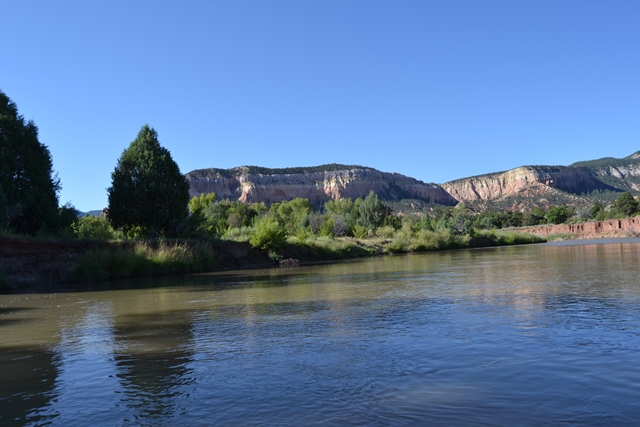 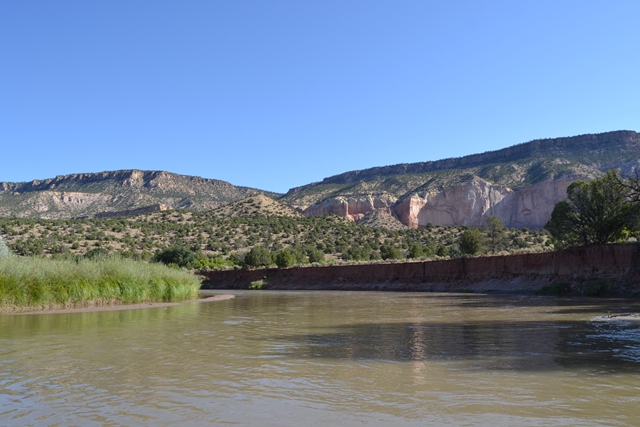 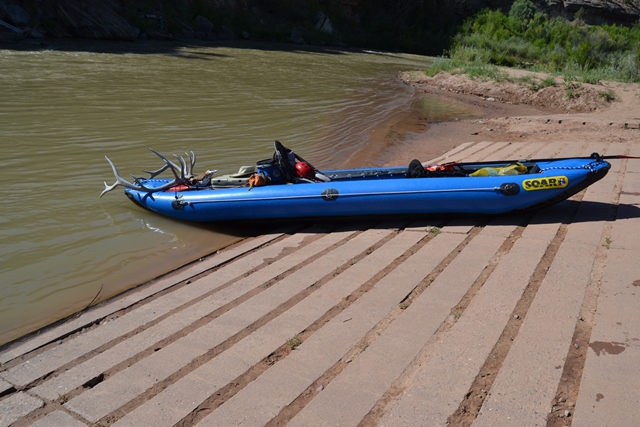 At the take out

Here is a map of my tracks.
https://drive.google.com/open?id=1YCdyS ... sp=sharing

I love that country! I pretty much grew up in Albuquerque and the Chama was my very first kayak trip. Thanks for sharing!
Top

I remember when Vera's and the tire shop were the only two active buildings in Chama, and the Cumbres-Toltec rail was a dream in a scrap pile.
If you haven't been there lately, wouldn't recognize Chama - Vera's is gone, there are a couple of miles of business and lodges, and you can get a fresh hatch chili burger at Boxcar Cafe.
Top