By livetofish -  Thu Jan 07, 2010 2:25 am
-  Thu Jan 07, 2010 2:25 am #1403302
This trip was planned back in Jan-Feb of 2009. We made the reservations in November and still had problems with their computer system. Door to door it is 675 miles. It was I-10 W to Fort Stockton and 150 miles south to the border. I have been to many national parks but this one just blew me away in terms of distances and size. The north entrance at Persimmon Gap to the campground at Rio Grande Village is 46 miles. The driving speed is 45 MPH. It is VERY strictly enforced. We saw multiple tickets being handed out. So it was one hour from entrance to camp ground.

We were there for 11 days total and two days on the road. So as I clean up each day's pictures, I will add more details and more pictures. 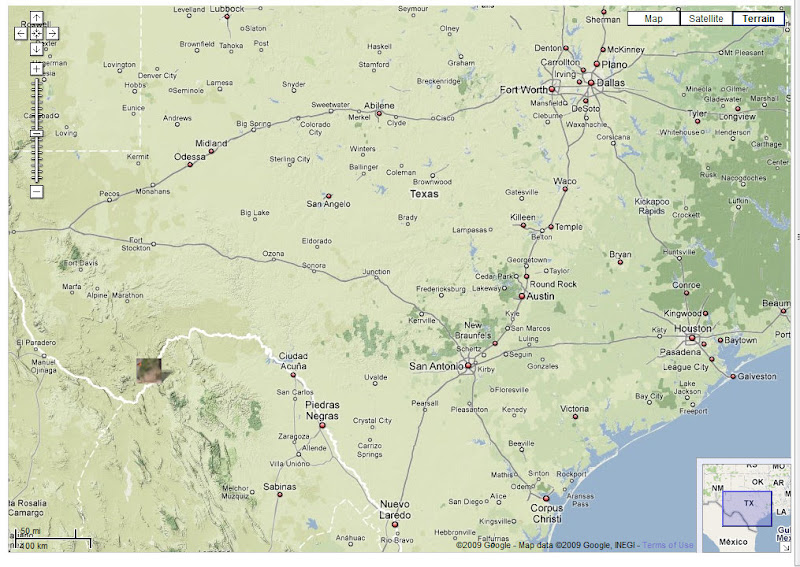 Day 1
The RV village is full hook up and is in an excellent spot. About 200 yards from the river, the flowing water keeps the area warm on cold nights and tall cottonwoods give protection from the desert winds. Even with this protection, we got the desert sand everywhere.

Path through cottonwoods back to the RV from the river. 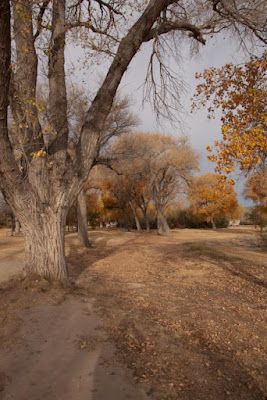 Through the cottonwoods looking east toward Sierra Del Carmen 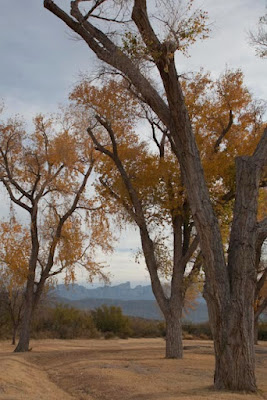 This little vermilion flycatcher declared his territory around the RV and was there everyday at day break. He was endless entertainment as he swooped and dipped to catch the bugs. It was fun to watch him go at his alter ego in the truck or motor home mirrors. 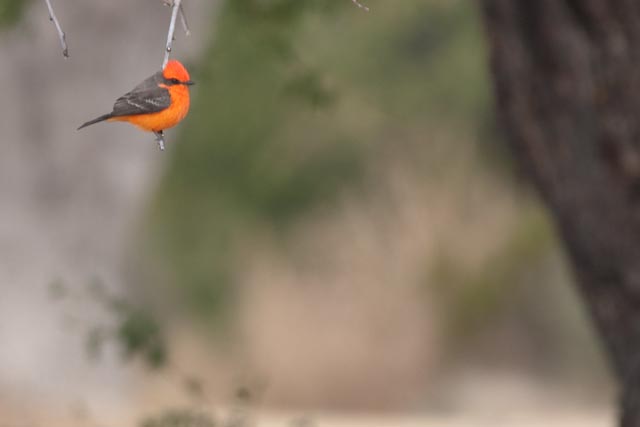 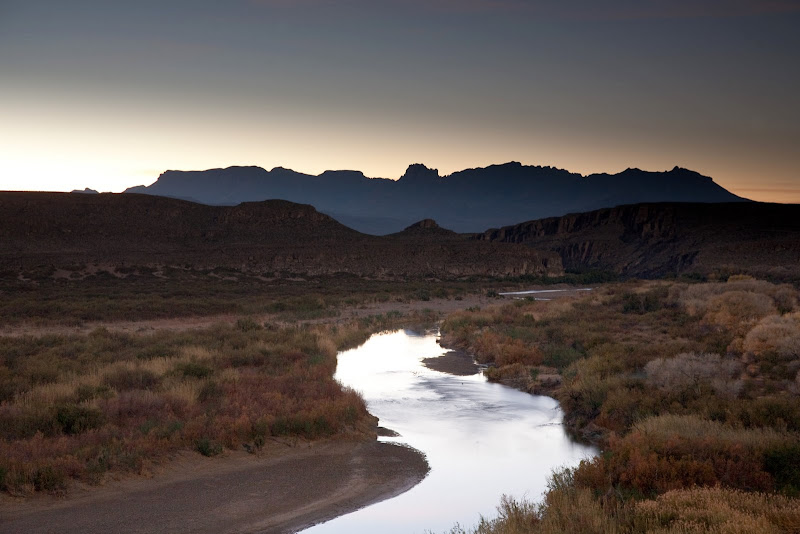 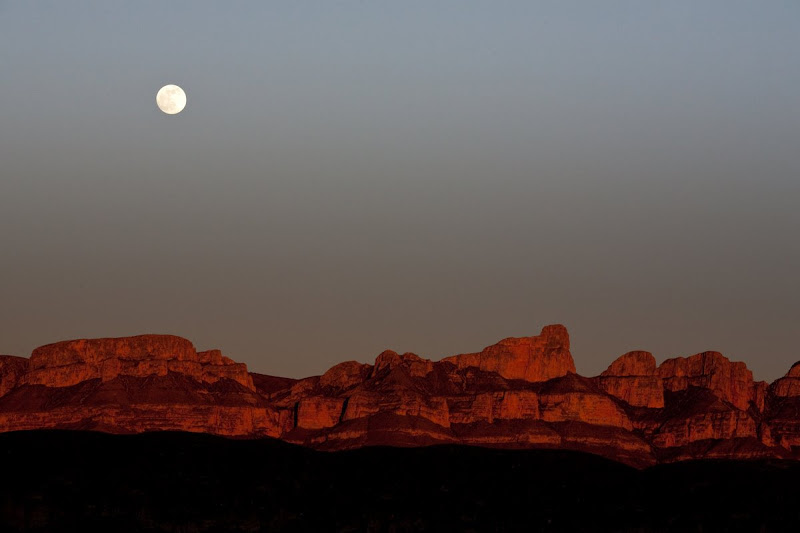 By heron -  Thu Jan 07, 2010 3:42 am
-  Thu Jan 07, 2010 3:42 am #1403316
Livetofish, those pictures really capture the stark beauty of the area. That poor river could be so much more if there wasn't so much pollution and salt cedar. We have caught some catfish in the Boquillas canyon area but we would not eat them - we were just glad there was something living in the water at that time. Hope it is cleaner now. Keep those pictures com'in!

) Another image forever embedded is that of Santa Elena Canyon.

I can't help but feel a little bit of jealousy viewing those pictures, livetofish.

Thank you for sharing!

Looking forward to seeing the rest of them.

I can tell you this. It is not the camera that made the difference. The full frame is nice. It is the L series lens that I was using made the difference. I have other pictures that were taken with a standard Canon lens on the same camera and they come nowhere close in sharpness and range of color capture.

There is almost zero software sharpening on these pics. Only fixes I did were to raise the exposure, take out the dust spots and crop the images for rule of thirds.

By livetofish -  Sun Jan 10, 2010 2:40 am
-  Sun Jan 10, 2010 2:40 am #1405045
Days 2-3 were just getting to know the lay of the land. Turns out that hot springs were just an easy drive away so that was our "hot" spot visit #1. Most people just jump out of the car and head straight for the springs. That is fine but if you are a curious sort, you would park the car and just follow the little stream bed to the right where the entrance sign is. You will come out to a pretty large stream bed which was a little stream when I was there. The place is full of animal tracks and bird calls so it is a good place to hang out for wildlife. 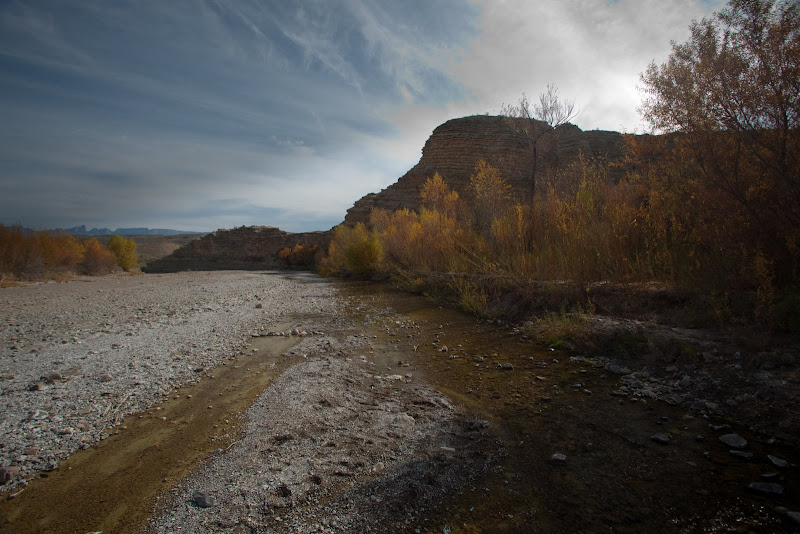 Sun going down as we came out of the Hot Springs. The next set shows the progression in a period of less than 10 minutes. Also, a photo hint, most people slam their brakes, jump out of the car/truck and start taking pictures of sunset. Don't. If you can, get into the bed of your truck. You have a higher viewpoint thus better sunset shots.

The tall spindly cactus-like plant is called "Ocotillo". It does a very interesting trick when it rains in the desert. It will put on leaves within 24 hours of rain and the fun part is that you can provoke this behavior by pouring few gallons of water around the base. 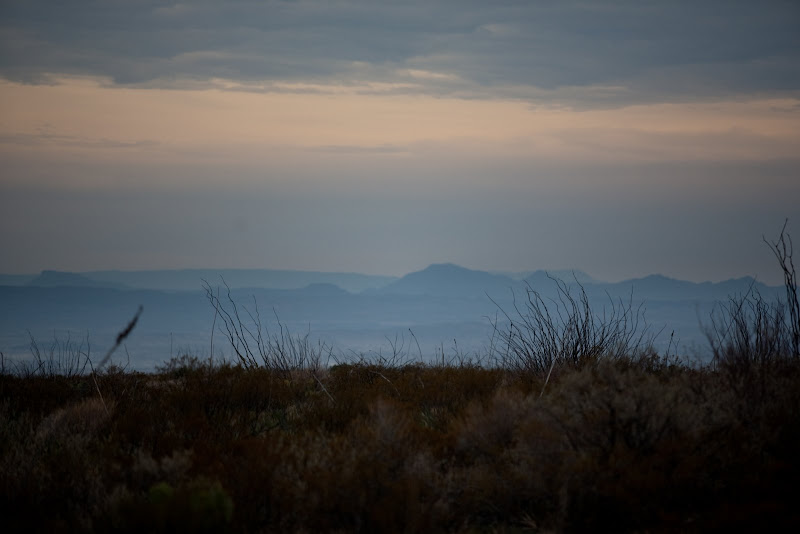 Also 99% of people we saw taking sunset pictures are so engrossed in the sunset that they forget about the color of the mountains/hills behind them. 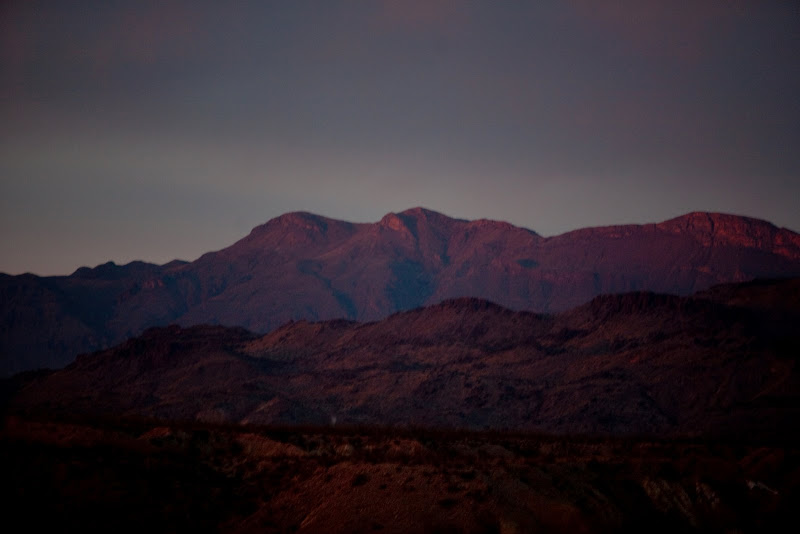 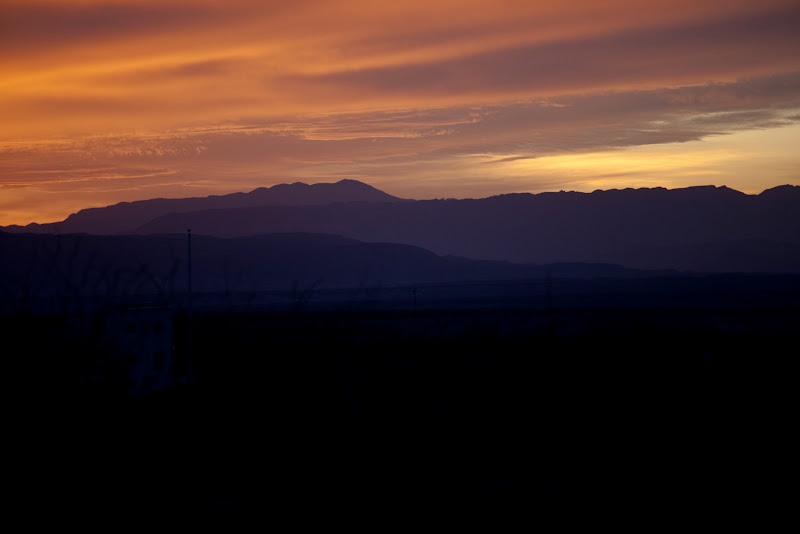 Tombo wrote:Dasu, is this the place where you need more clearence on your truck and RV?

You got it. There were so many trails where we just had to stop and turn back because the truck would not clear it.

Also, there are tons of camp spots away from the road to park the RV where the current height would not clear.

Today is the plant and parental pride issue.

The parental pride part is with my nine year old. Put a camera in a nine year old's hands and turn her loose. You get miracles and amazing pictures. She has the eye and she braved freezing cold, rain, mist and 40mph winds with me for some of these pictures.

First the plants. The park is truly an oasis of life. It is a day and night difference between the ranches around the park and inside the park. We saw, maybe 10-20 species of plants outside. We saw and identified at least SIX species of cactus, four species of Yucca, different species of oak, multiple evergreens (firs, pines, etc), multiple oak species, and of course, my personal current favorite the big tooth maple.

Next time you go into the area pay close attention to the ranches and vegetation. Most common is the creosote plant which is EXTREMELY invasive. Once inside the park boundaries, you will notice creosote plant along with LOTS of prickly pear, other cactus, cactus-like plants. It is like day and night.

Purple cactus. I actually heard some tourists ask the ranger if the cactus were suffering an infectious disease that is turning them purple. The look of confusion and surprise on ranger's face was something else but I did not want to push my luck and take his picture with that expression. 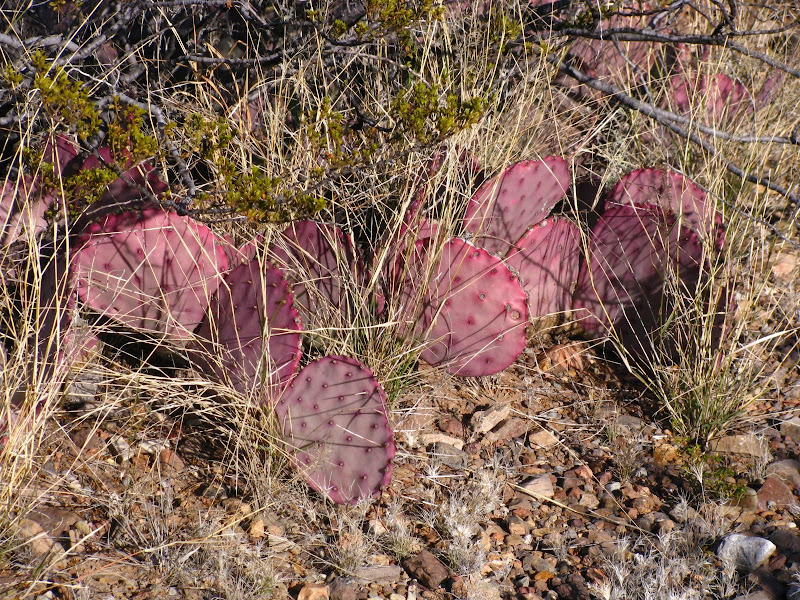 Found these little guys all over the place. Next trip is going to be with a cactus field guide. 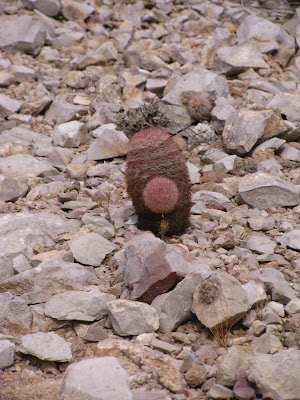 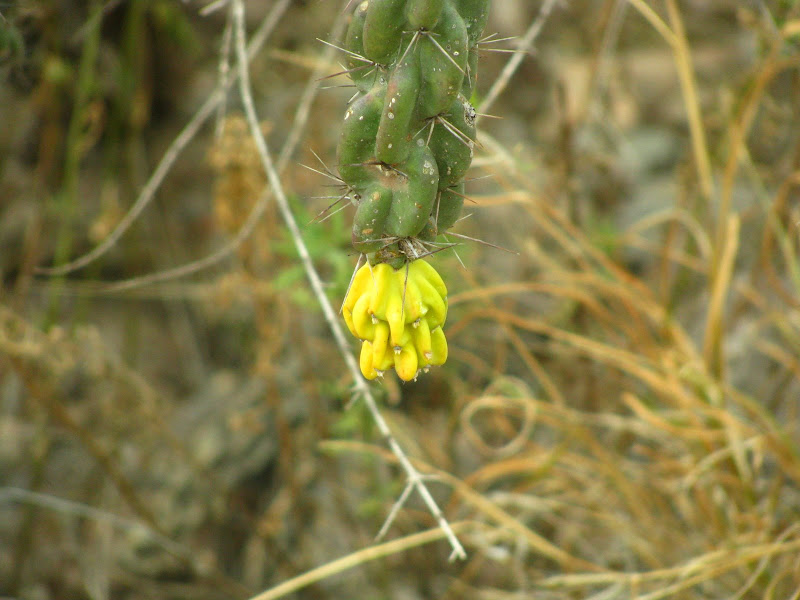 The worst of them all, hiker's nightmare. The "lechugilla" or the "shin daggers" drew blood whenever I was not watching. I bear two nice scars on each leg as mementos of the trip. The back pointing spines/thorns will rip your skin apart and each one of the little b$#%^ds will make a separate scar. 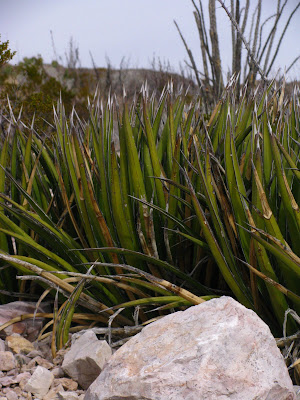 Though the spiny stems look dead, the plant is very much alive. You can pour a few gallons of water around the base of an ocotillo and it will trigger a leafing and with enough water you can trigger a bloom. 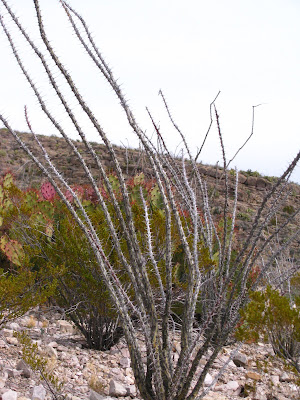 The candelilla plant has an interesting scientific name "Euphorbia antisyphilitica". As name indicates, indigenous people of Chihuahua desert used the extract as a herbal cure for the disease of the same name. However, the plant became famous of the wax it produces. The wax is produced as a mechanism to prevent water loss. You can still the remains of the pits and work areas where people used to extract wax from these plants at various locations around the park. 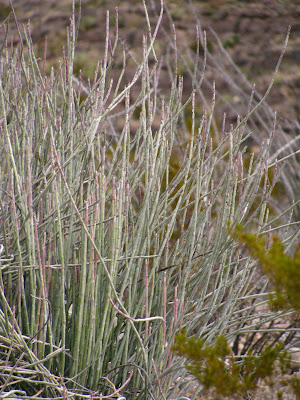 Famous exotics still hang on in the park 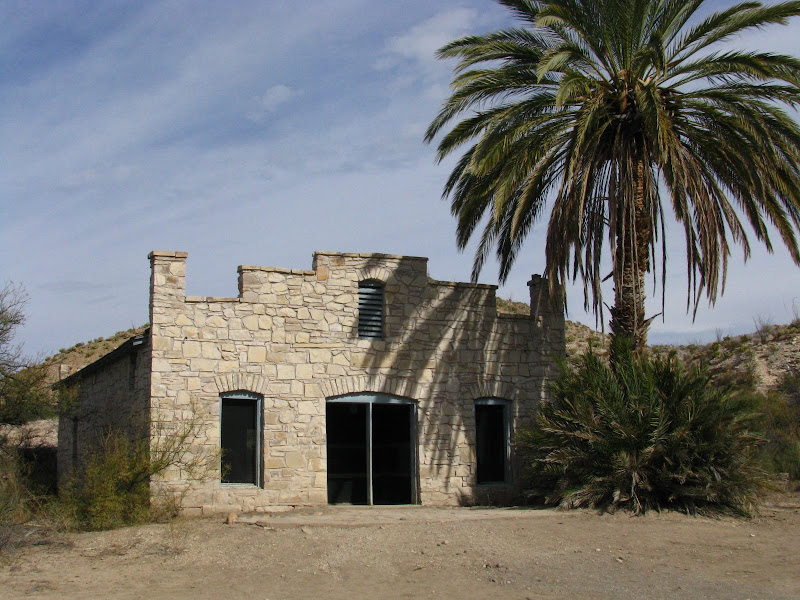 Creosote bush is everywhere - wanted or not. 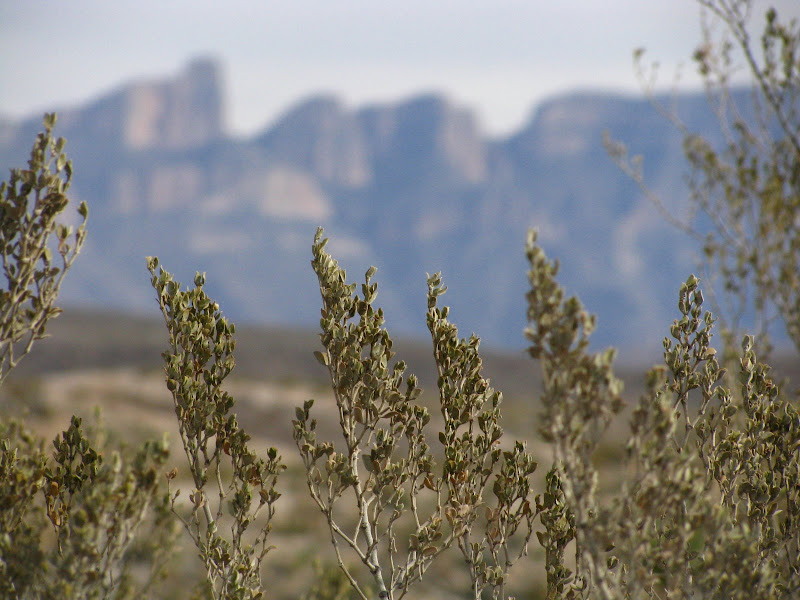 Up in the mountains, we got some beautiful fall colors. The oaks were just changing color when we were there. 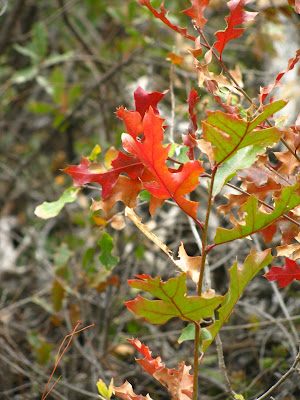 Personally one of the best indicators of change in altitude other than popping ears is the appearance of sotol plant. Locals make and sell walking sticks from the flower stalk. It is quite frail but makes a cool souvenir.
Sotol plant is actually from the day lily family though human interaction is very cactus like with very nasty scars on your legs. 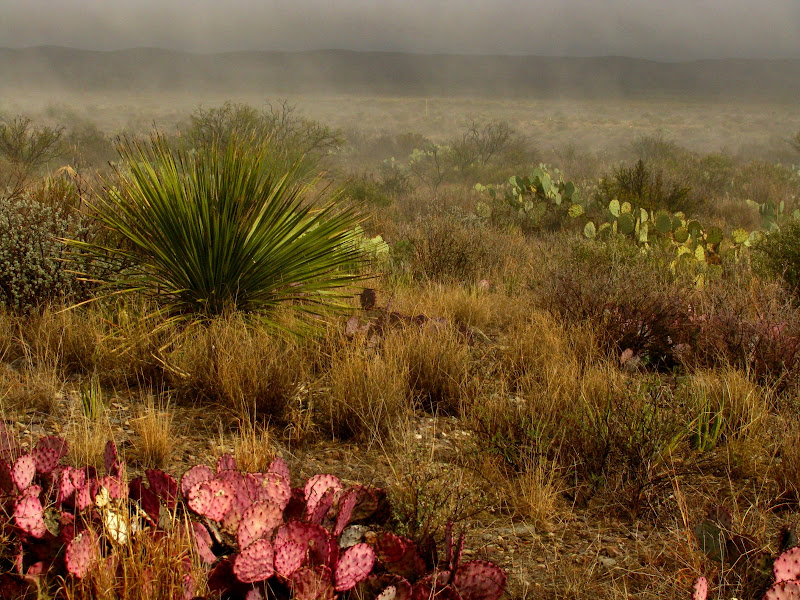 Some of the sotol has just finished flowering at the base of the Chisos. 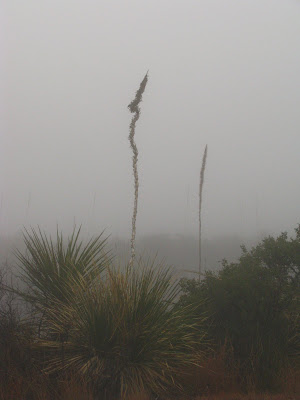 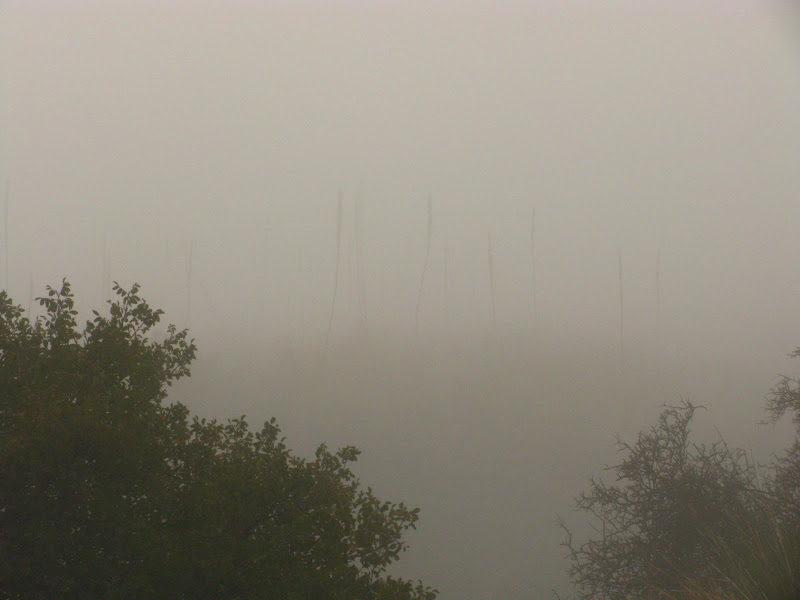 Can't ignore the reeds along Rio Grande. The taller spiky ones with pointy flower stems are the non-native invaders from SE Asia and Africa. The shorter ones with droopy flower heads are the native reeds and are usually found where park has tried to beat back the invader. 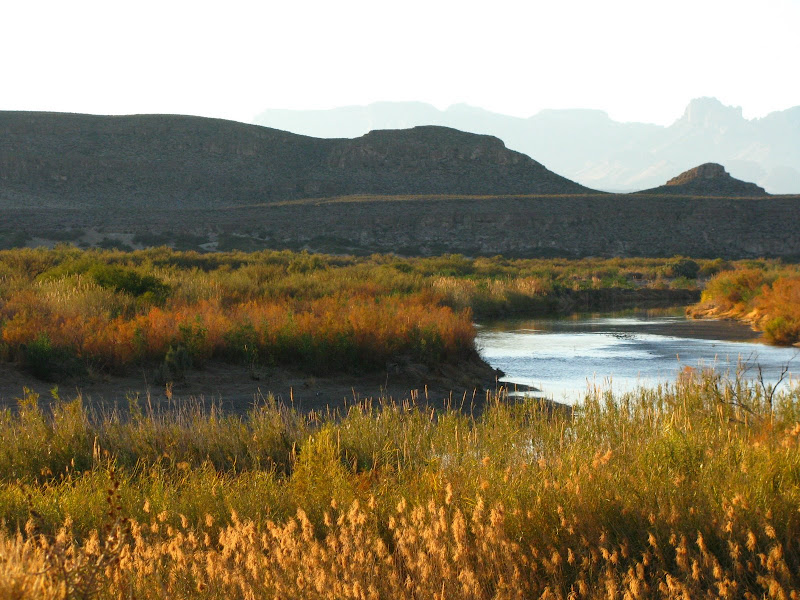 Cliff Swallows - don't know the species but there were thousands them around hunting mosquitoes. 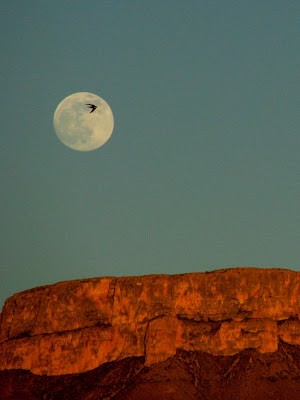 Well how many mosquitoes 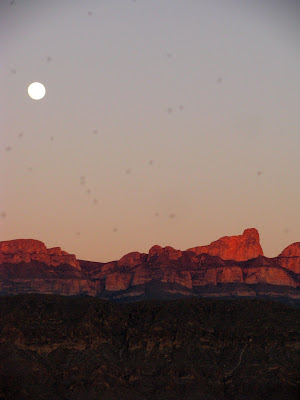 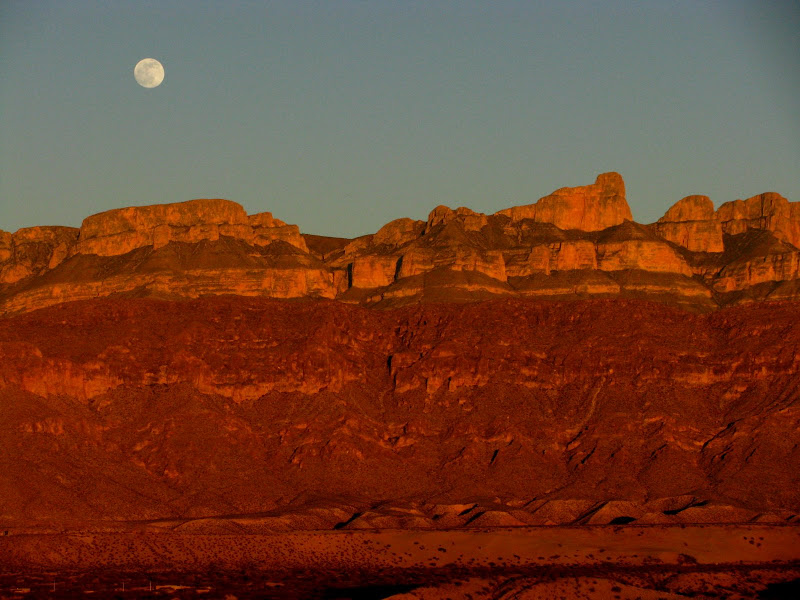 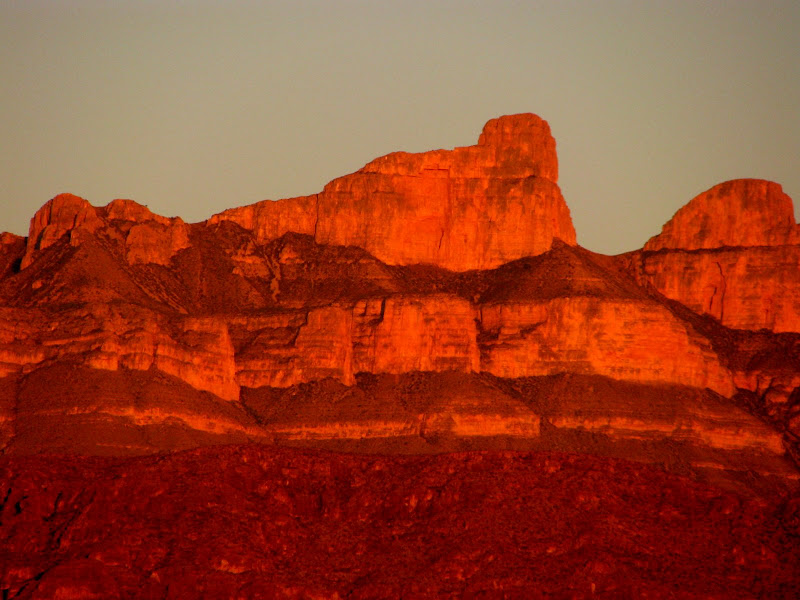 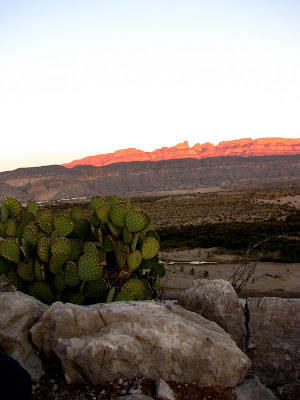 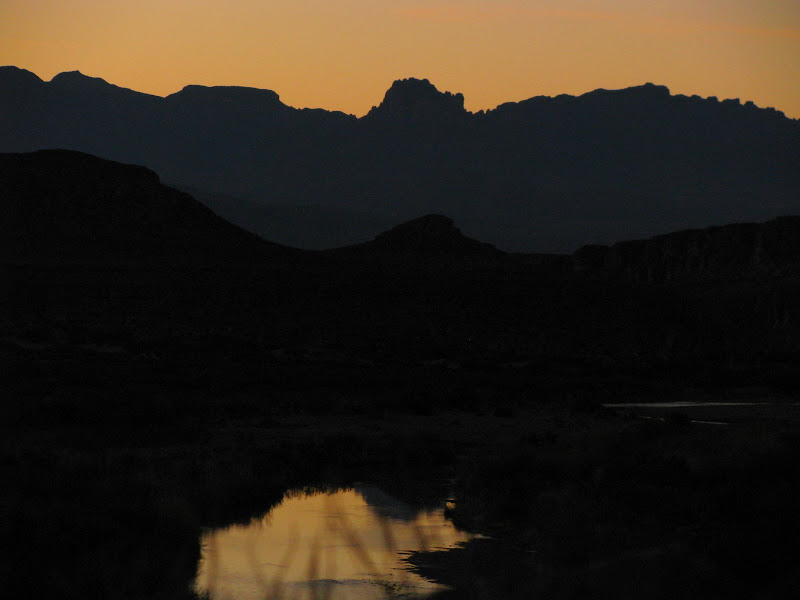 My older sister and I will be there in April. I am afraid to have her look at these pictures - may set the bar too high for photo quality and scenery!
This past May after our overnight at BBRSP, we drove through here and stopped for a picnic lunch before we headed up to Junction. I drove through the Chisos Basin area and showed her my campsite from a previous trip. She was quite taken by the landscape and insisted we spend more time here this spring. She didn't have to twist my arm too much - lol!

Wish I could afford a better camera but I think what I might do is actually study the manual and see how much more I can get from the camera I already have. It may surprise me what all it will do!

Thanks for sharing those photos - after those, who could resist a visit?!

hhernandez1501 wrote:I Going to the park soon do u think I should take my kayaks or fishing rods out there

I say both. Check with the NPS rangers or guides in Terlingua for trips.

I am just getting into tying flies and don’t know […]

JW I use these. Fish Ruler Measuring Stickers (2 P[…]

What is the condition? Upload pictures. Would you […]