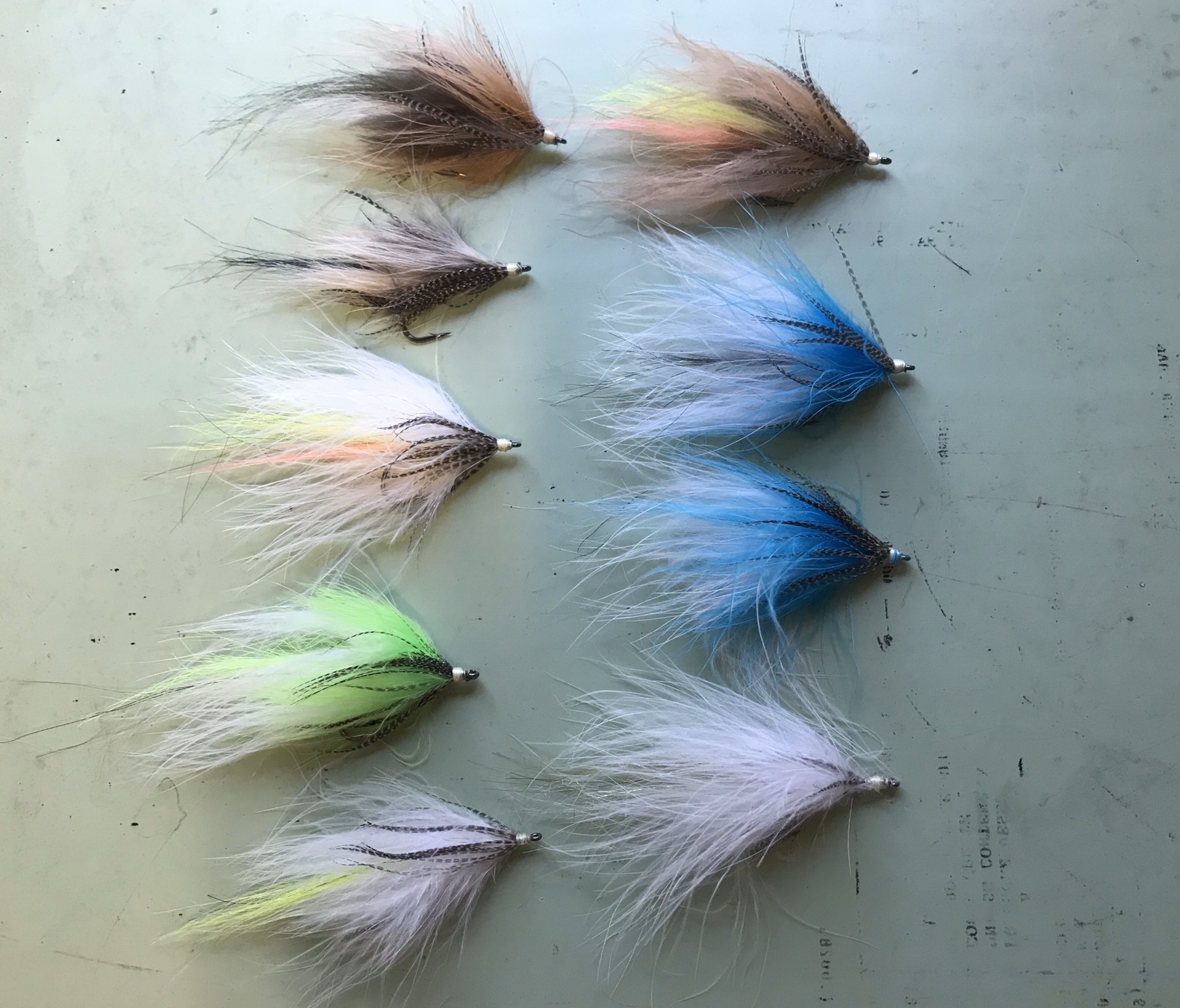 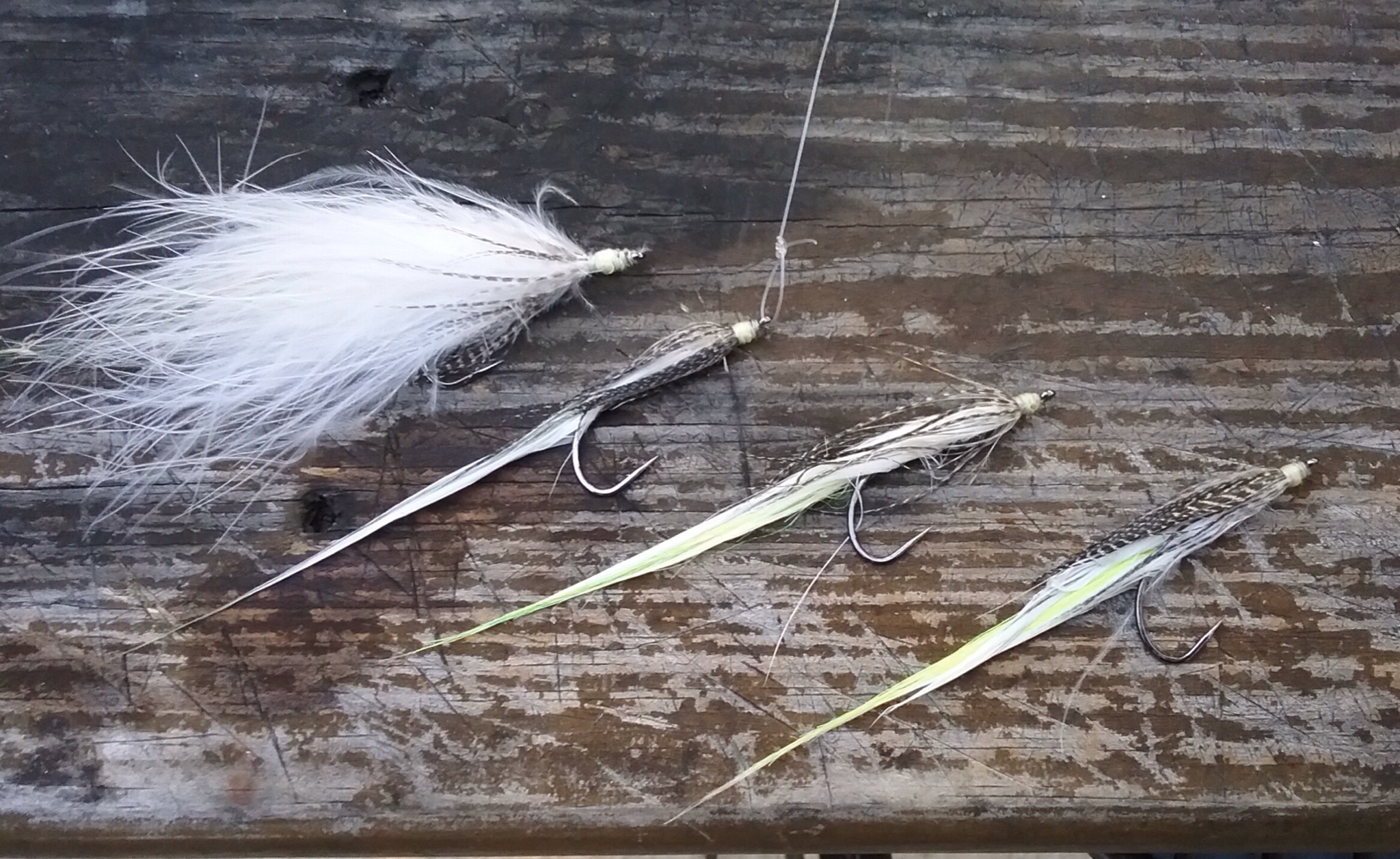 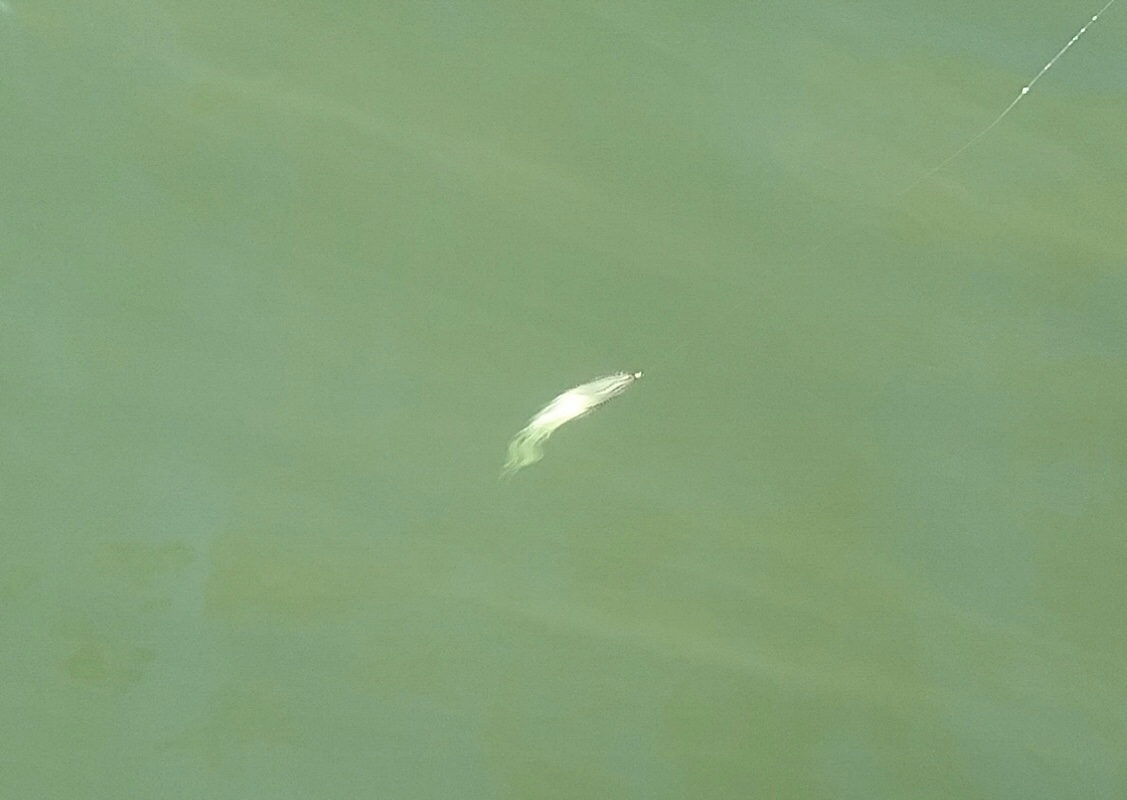 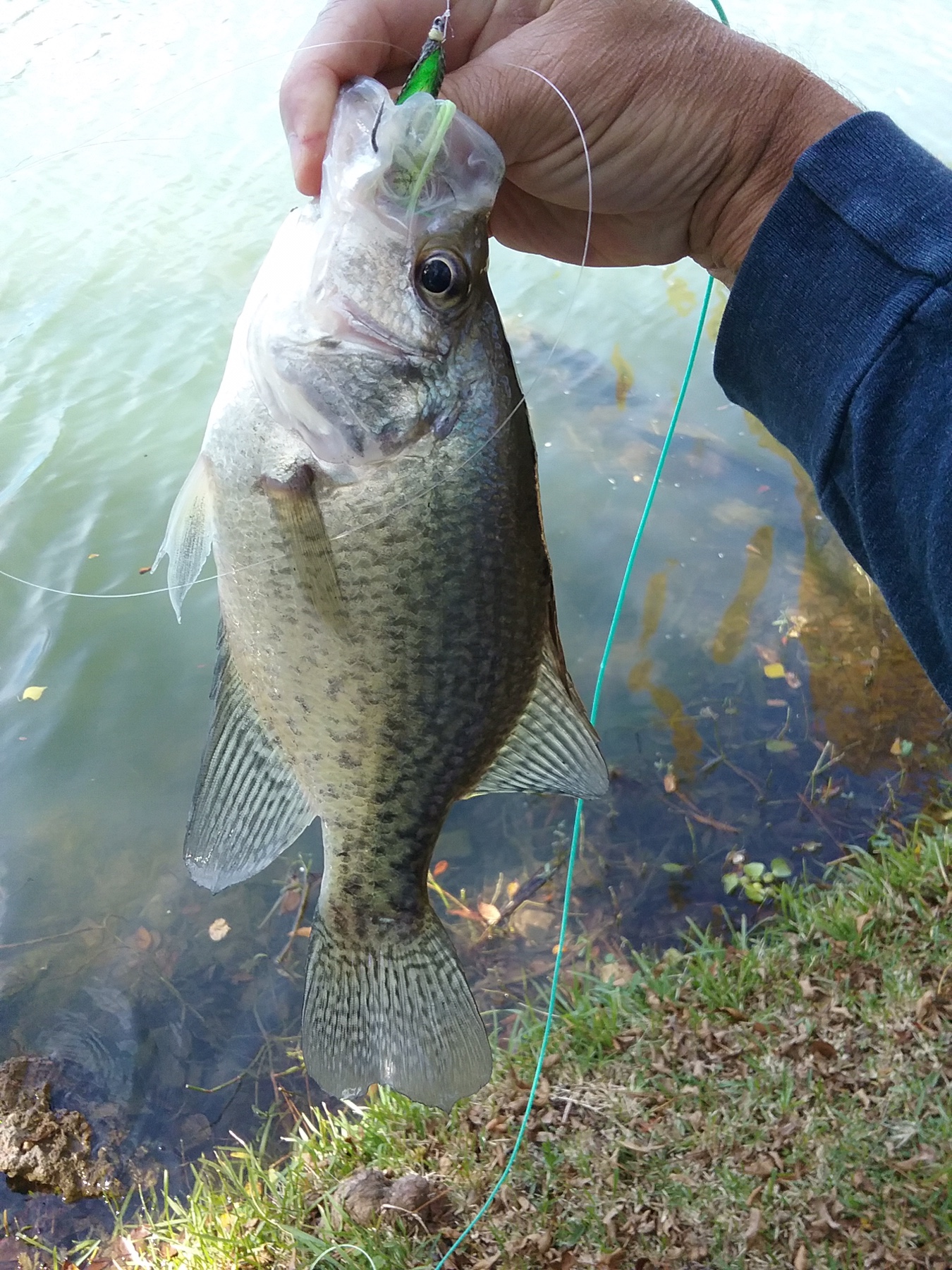 Interesting Pattern I’ve recently started tying and fishing. My daughter plucked out and brought me some duck flank feathers (probably gadwall) from a hunt. 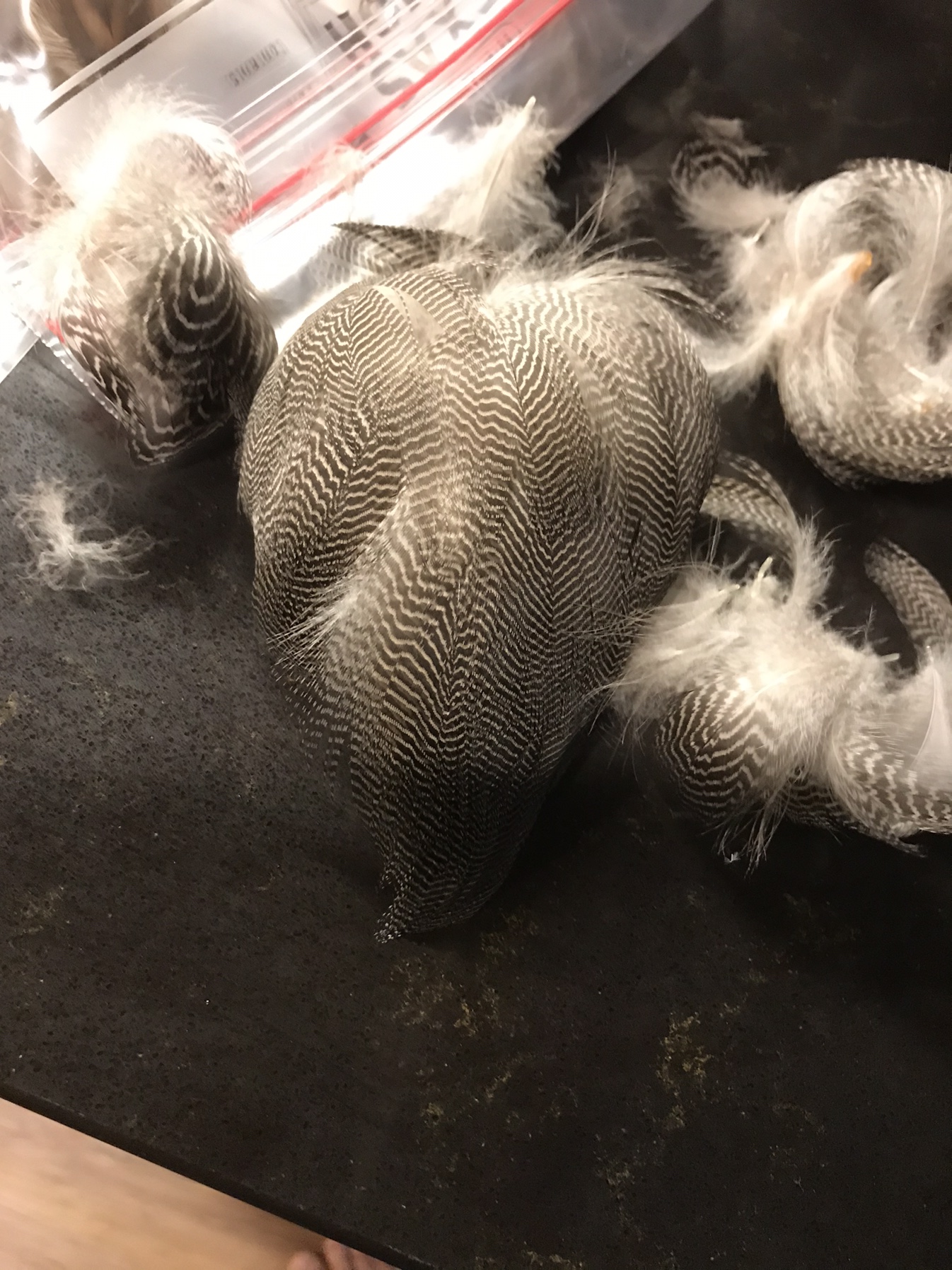 I wanted to use them as they look so great, but wasn’t sure what to do with them. Someone on a fly fishing forum suggested the Gartside Soft Hackle Streamer. Went to the Gartside website and found a recipe. I added a thin craft fur tail to the recipe, altered the flash, changed the hooks, but otherwise it’s fundamentally the same.

Looks fantastic in the water with the marabou giving life and creating a great profile. Casts easily with even a six weight as the marabou is streamline and not bulky when wet. Has a sink rate about like a Corky suspending lure. I use fluorocarbon leaders and tip which sink on their own. I bet the Gartside Soft Hackle Streamer might even sink more slowly with a nylon monofilament leader.

And fish like it, which is really the point. I haven’t tried it much yet, but the first impression is it will be a regular part of my saltwater and freshwater boxes. 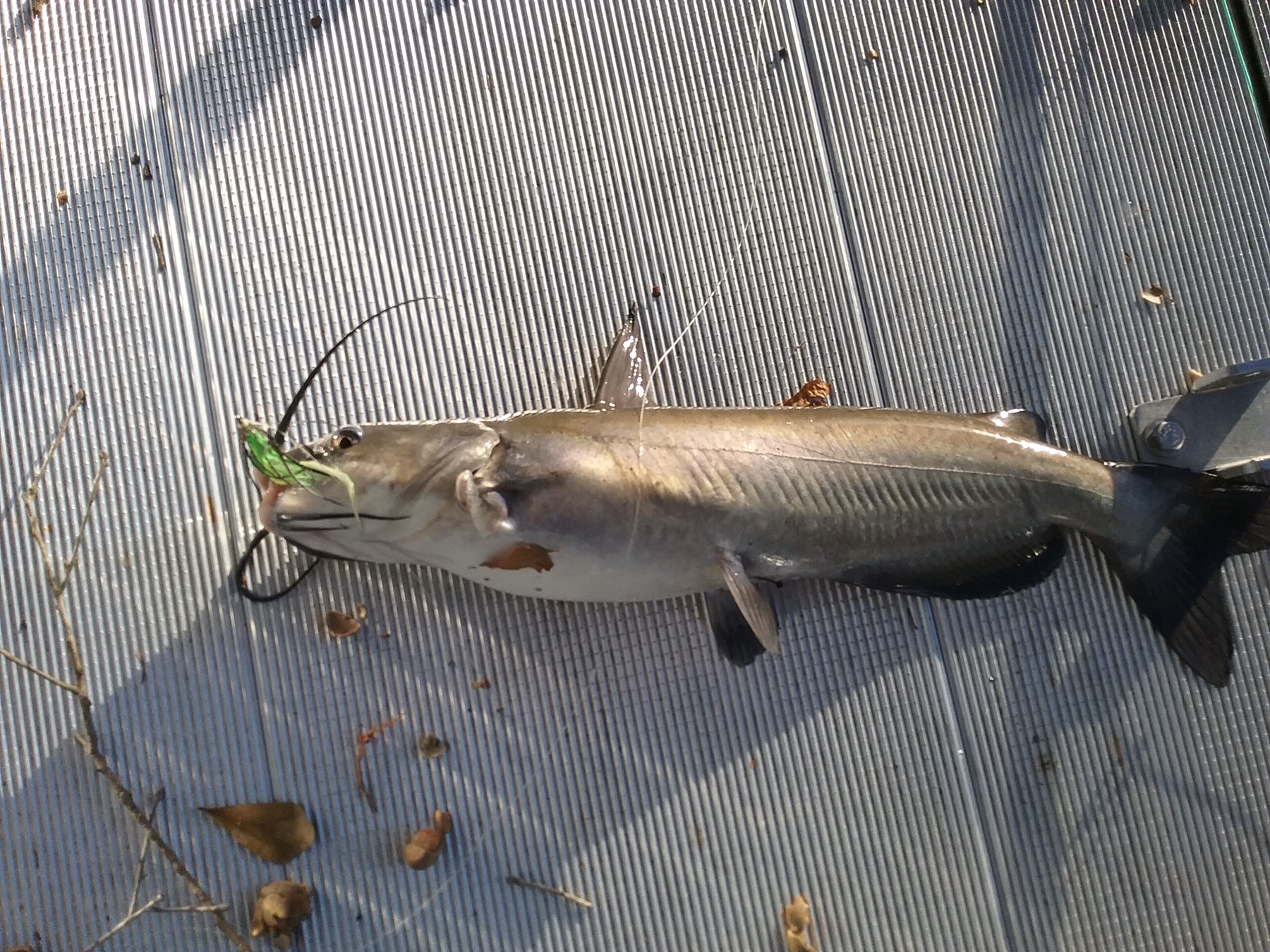 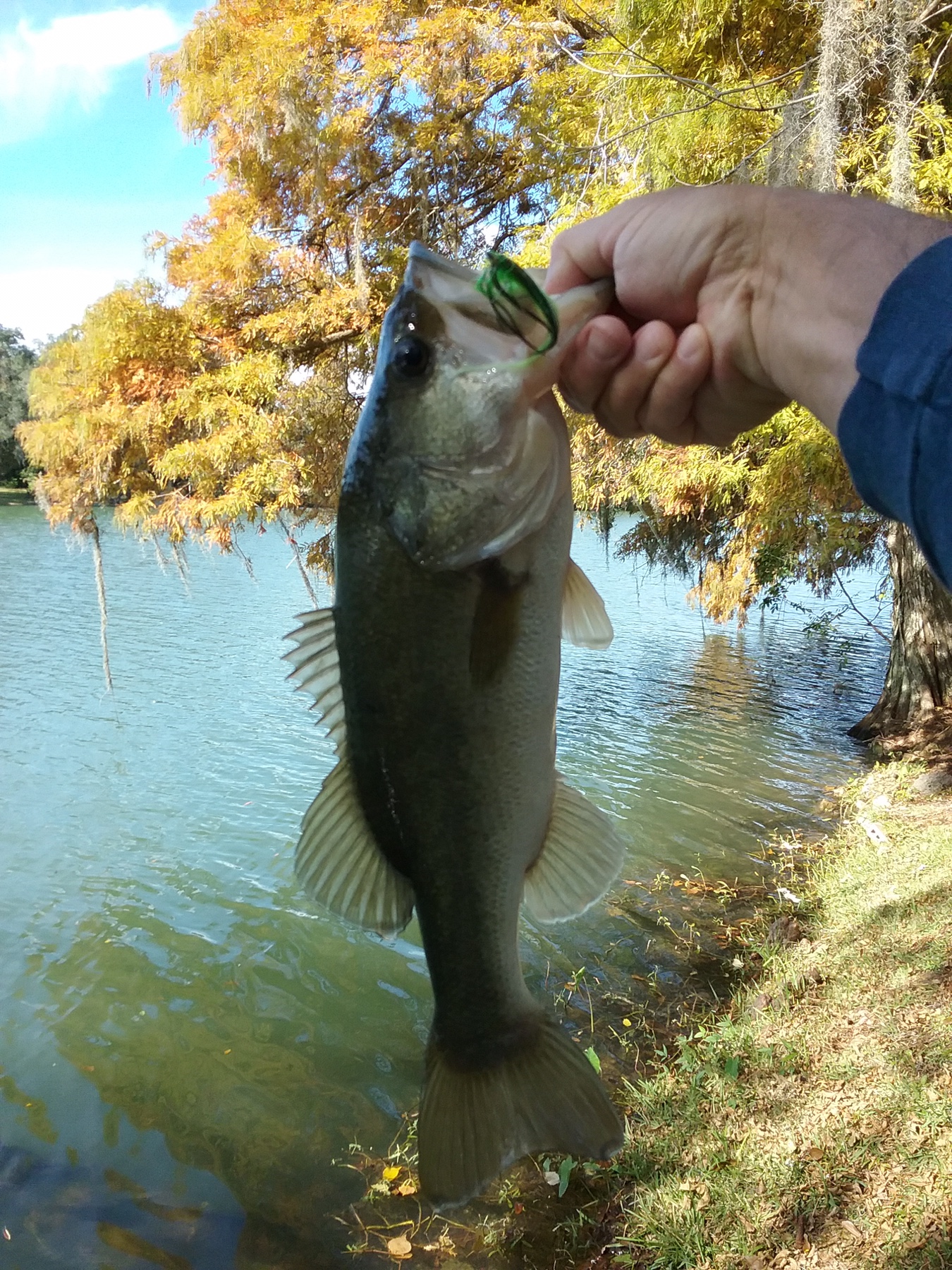 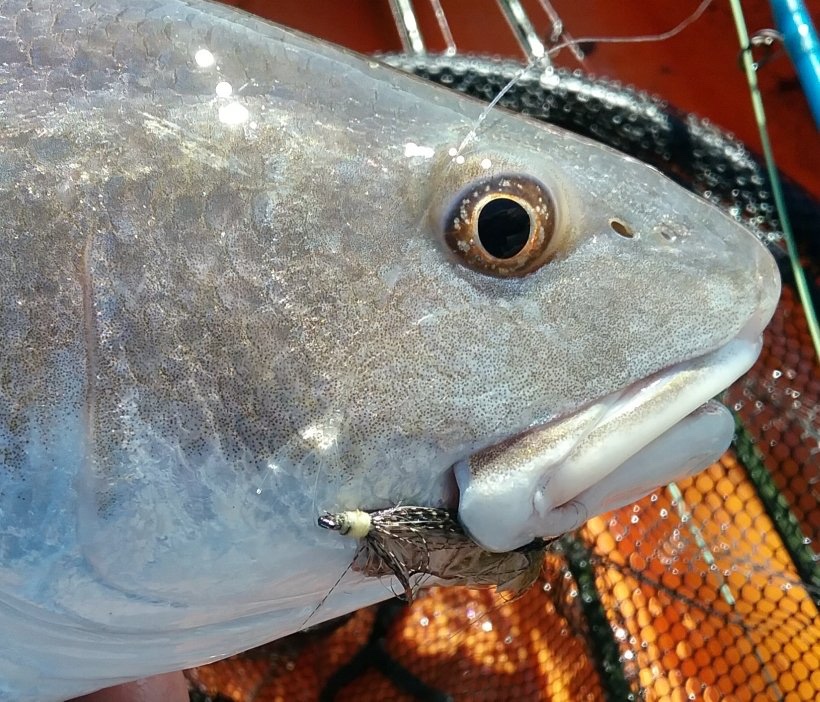 by Frreed
Nice looking fly. It is, obviously, an effective baitfish pattern. Care to share a basic recipe?

Here’s the one I used. 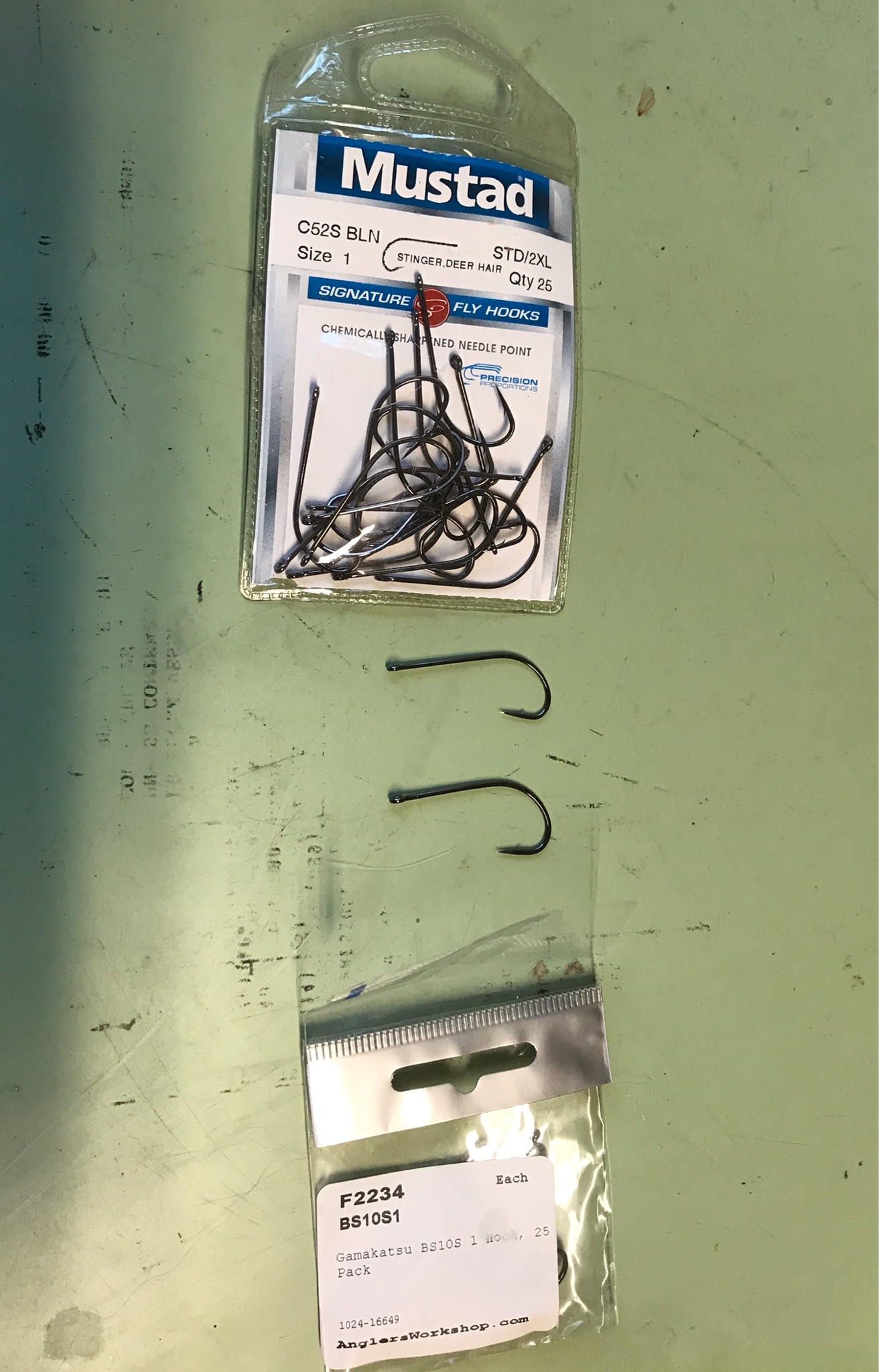 The above are the hooks I’ve been using. My hackle is gadwall.

I tie in a very thin craft fur tail at the beginning, whatever color I think might make sense.

Some of the darker ones I’m using wild turkey marabou.

Not all marabou is equal. Fuller longer feathers produce fuller and longer flies. They look almost ridiculously full when dry, but collapse into almost nothing when wet and out of the water. Only in the water and soaked through do they look right.

After fishing them for a time, all that puffiness when dry settles down into a baitfish shape upon further drying. 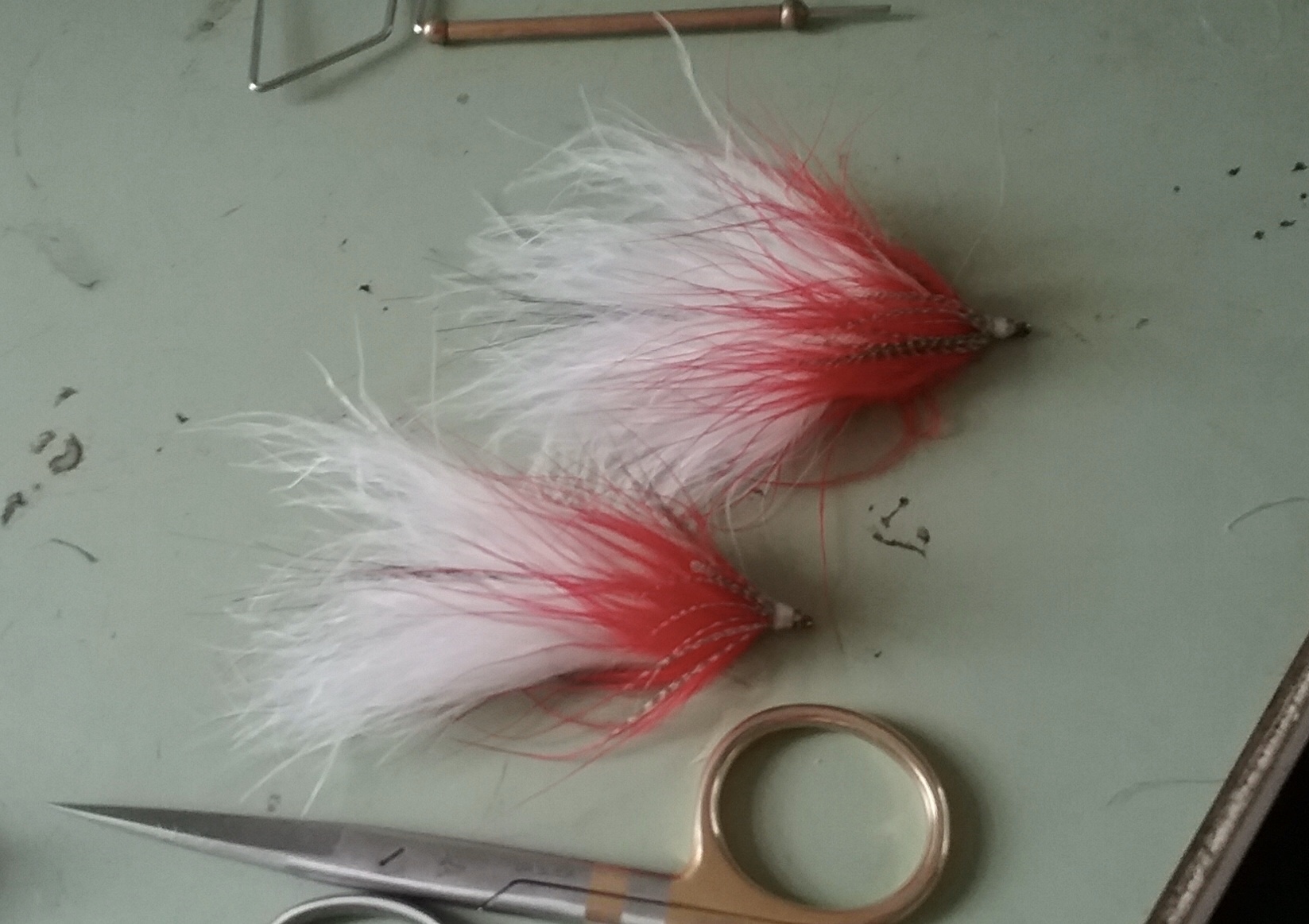 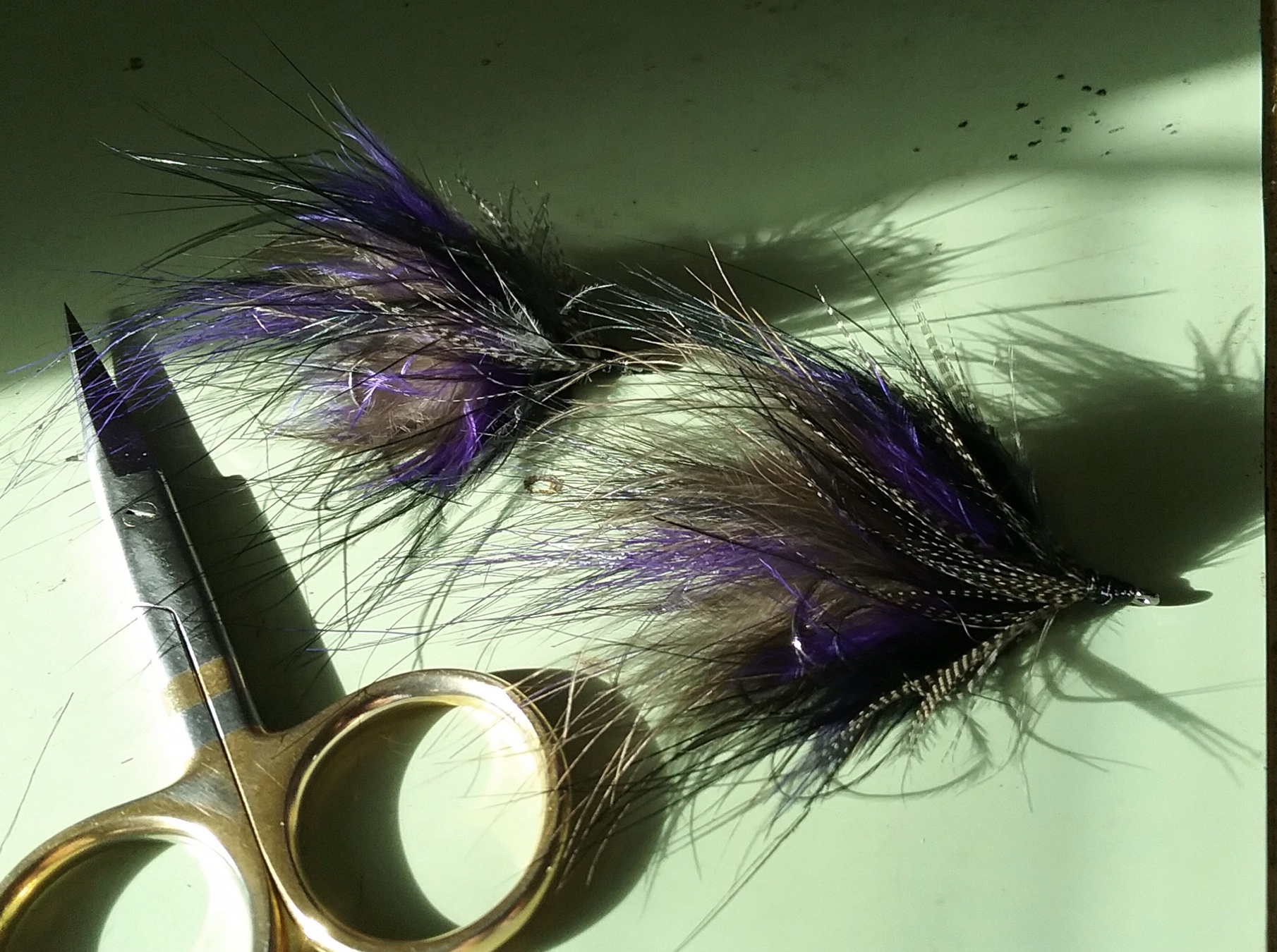 by JW FunGuy
That is a nice pattern! I think I just found my project for this some what gloomy morning! Thanks for sharing!

by Prof. Salt
Nice flies, and great point about the turkey maribou.

I really have barely fished them in the salt, but caught a few redfish plus the best one of the day along a shallow reef edge without many wasted casts or effort. That one result got my attention as this fly might be a keeper. I had been using a weighted olive redfish crack just prior and felt like the Gartside streamer, a white one with an olive craft fur tail, worked just as good if not better than the weighted redfish crack on the same fish holding structure.

Then, they definitely catch LMB bass, the chartreuse and white one anyway, plus other freshwater fish without too much effort and that reinforced my confidence in the pattern.

I’d like to use them on speckled trout and where they live, but haven’t had a chance to yet. I don’t see why the streamers wouldn’t work well on those fish in the right situation.

All of the ones I’m doing are on size one stingers, Mustad or Gamakatsu. Fuller, longer marabou produces a bit larger profile in the water. Dry, they are nothing like what they look like in the water, but they don’t collapse into a tiny profile like a wet one does once out of the water. I’m typically using two large marabou per streamer. I try to do the craft fur tail to be just a tiny bit beyond the marabou. The craft fur tail I’ve been doing is more of a hint of a tail, just an ultra thin strip of contrasting or complimentary color.

I guess if one had spectacular marabou or just like bigger hooks a 1/0 or even 2/0 hook could work. I don’t know why they could not be downsized some either. Google Gartside streamer and the Jack Gartside soft hackle streamer for his website (it’s still up despite his passing several years ago) for the SBS.

I’ve been using gadwall flank, but evidently from the website other soft hackle works.

They don’t foul much. A bad cast will cause these flies to foul on occasion and they can foul like many other patterns such as Clousers will on bad casts. I’ve water tested and fished several of these and none have shown bad tendencies such as unbalanced movement, spinning or anything like that. The only repairs I have done is pick out the odd Wild duck hackle on a couple. I haven’t used any glue or anything on the heads or finishing threads. I whip finish twice and call it done. I might have to UV Cure the finishing wraps if I get into sharp toothed fish, but the redfish didn’t tear them up, nor have the LMB.

Good luck. Post some photos if you like. Exchanging ideas and such are what forums are all about and mostly helpful, IME. 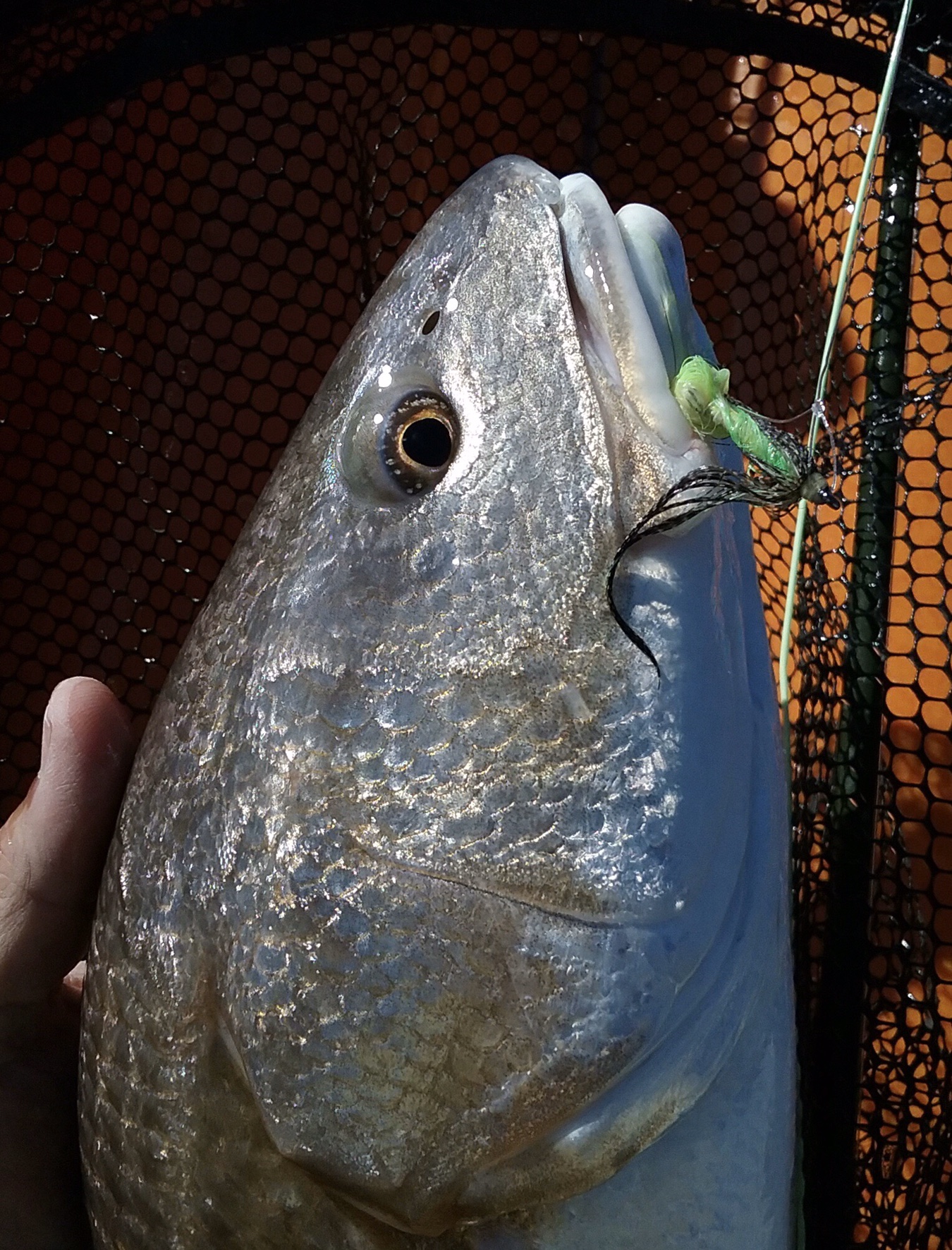 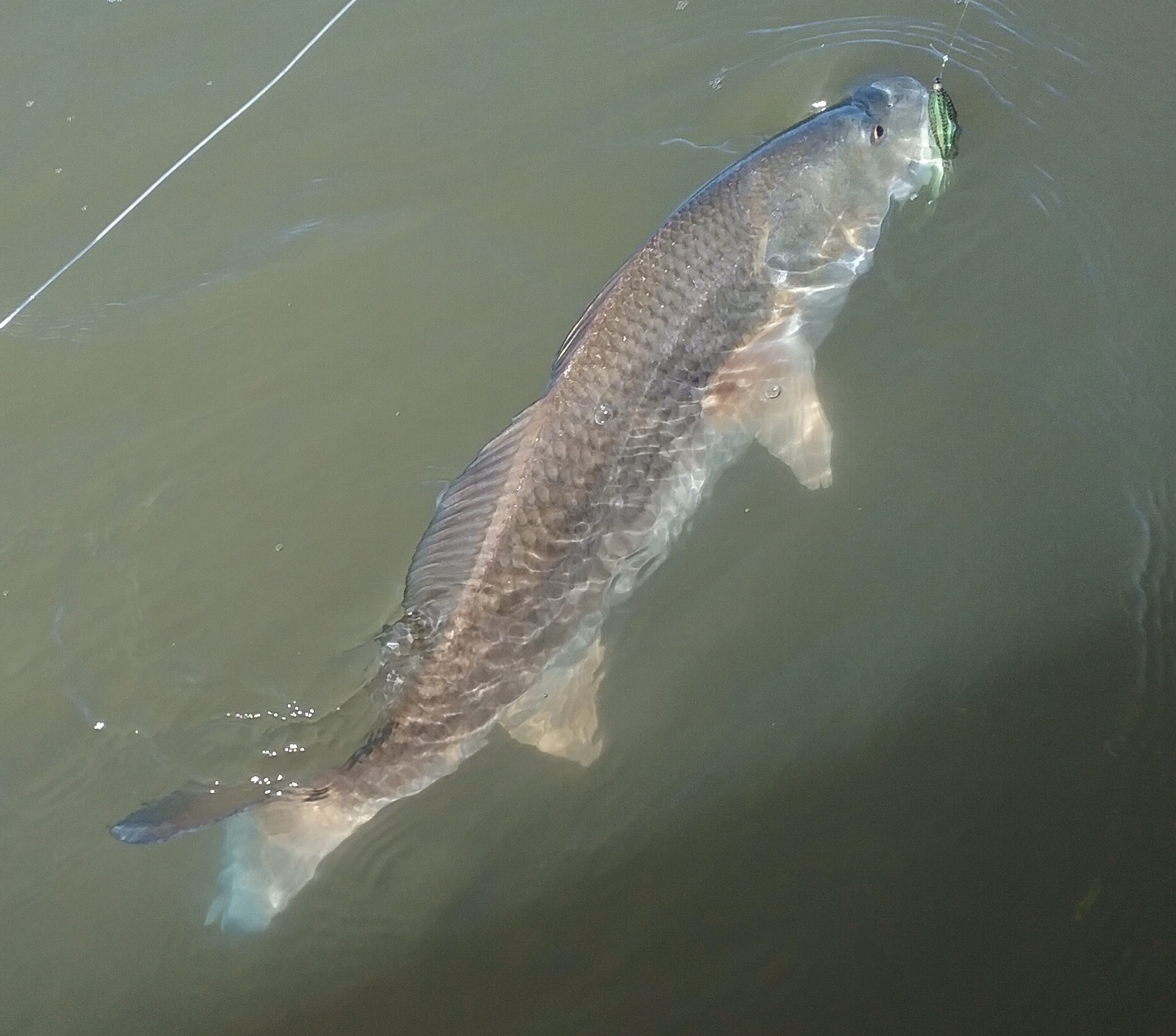 Tried 3 different redfish crack and a borski slider, but the redfish only wanted the Gartside soft hackle streamer today. Got 8 to hand to 26”, once I figured it out what it was the fish wanted. Surely made me a believer in the streamer.

by bones72
Man that looks like fun. Those are some pretty fish. Guess they were after a slowly sinking fly.

by karstopo
No, I haven’t given up on these, more like doubling down. Just fun to tie and fish and effective too. Duck hunting daughter gave me a Hooded Merganser she shot. Look at those flanks! Turned the into some more of these streamers in great saltwater colors, the hope anyway, can’t wait to fish them.

by karstopo
These are a de facto fly version of the famous Paul Brown’s corky. I don’t know which came first, but I’m betting Paul Brown cooked up his first corky before Jack Gartside made his first soft hackle streamer. I doubt they had anything to do with each other besides recognizing a good concept independently. These streamers suspend like a corky and can be fished real slow or fast. They are only fluff ball when first tied. Once in the water for 30 seconds they get much more fishy looking like in one of the prior photos, the black and white version.

Best surf trip on the summer came courtesy of a chartreuse and white one.

by ben_beyer
Fly that is close to a corky???

I'll have to tie some up then!

by karstopo
Casey Smartt’s Dead head minnow probably is even more like a corky, but I don’t like tying those.
All times are UTC-04:00
Page 1 of 1
Powered by phpBB® Forum Software © phpBB Group
https://www.phpbb.com/