By 2 Weight Willie -  Fri Oct 09, 2020 9:02 am
-  Fri Oct 09, 2020 9:02 am #2310851
I have been looking at all of these brands very closely and based on wilderness Systems 2021 models I am going to have to say they are winning me over...here is my rankings
9.1 Wilderness Systems- why- great designs and reasonable prices
8.6 Old town-why- pretty good yaks, but the sportsman series was just topwaters painted differently. Kind of a disappointment
6.7 Hobie-why- over all sleek looking things, but way, way to expensive. With hobie you are basically buying a brand 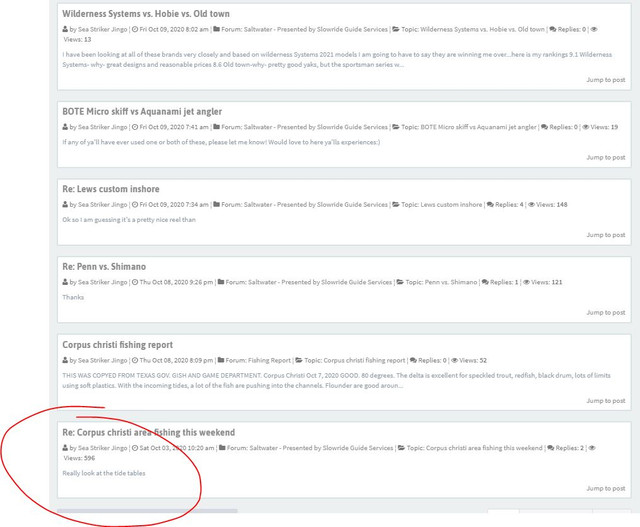 It detracts from on-topic discussions among active TKF members.
We should all find relevant topics and post to top them until TKF Admin decides to finally ban the spammer's IP Address

the only interest of this individual is to exploit TKF bandwidth
Last edited by Ron Mc on Fri Oct 09, 2020 9:45 am, edited 1 time in total.

This individual is only here to exploit TKF bandwidth to earn a few pennies.
Needs to be ignored other than reporting its posts as spam.
it doesn't have feelings to get hurt, etc.
It begins nonsensical topics trying to fool us that it has thoughts and feeling about subjects that interest us, and starts even more topics with its primary spam directive
Last edited by Ron Mc on Fri Oct 09, 2020 10:05 am, edited 3 times in total.

SWFinatic wrote:Guys I've looked into this and I believe this is not a bot. I've asked him to slow down a little on the post and ease into it and he has agreed. I'll be watching to see if he follows what I've asked him to do. I'm sure he will.

the simple math says you're incorrect - one post to look like interest in our interests, 4 posts spamming commercial products

SWFinatic wrote:Guys I've looked into this and I believe this is not a bot. I've asked him to slow down a little on the post and ease into it and he has agreed. I'll be watching to see if he follows what I've asked him to do. I'm sure he will.

the simple math says you're incorrect - one post to look like interest in our interests, 4 posts spamming commercial products

He is replying to my specific messages and providing legit responses. We'll see.

Ron Mc wrote:thanks for actively pursuing this - note none of the commercial product threads begins with I want to buy a...instead it's all what do you think about this? he's getting paid minuscules of a penny every time that brand gets repeated on the thread.
I haven't over-analyzed this, because we see it on other forums - maybe I've over-simplified it.

It has to be a bot. The post are very generic and copy paste like. A 13 year old would not just come spamming some random forum out of curiosity. Any normal 13 year old human would ask an actual question, and interact in stride without it feeling like it’s being read off a script. Ban

Sent from my SM-G960U using Tapatalk

By 2 Weight Willie -  Fri Oct 09, 2020 1:51 pm
-  Fri Oct 09, 2020 1:51 pm #2310889
I have also realized in my time fishing that a lot of grown men have bo clue what they are doing when fishing wrong times and spots. So I decided to try to teach people on this forum but I quickly realized that the people here are already educated. So I just went to products that either my friend have tried or me. And I wanted ya'lls opinion. I do not earn money. I mean look at how my paragraphs are worded. I AM NOT NOT NOT A BOT

Sent from my SM-G960U using Tapatalk

I honestly thought it was a computer bot, because of the predominantly (totally?) lame posts, and more than a few faux pas, but it's been borne out that he's really a kid with a lot to learn, including how to get along in a community like TKF - a mix of e-friends and on-the-water fishing buds. As a group, we have a great deal of knowledge, opinions based on experience, and a desire to share with our friends.
Jerry "took him under his wing" to explain a few of these things.
I got a call from Blake about the situation, which covered pretty much everything I just stated, before we got to the fun conversation about fishing and new truck.
I was the first calling for ban, but don't think that's necessary now, with the applied reins and a demonstrated effort that he's trying to fit in.

I wouldn't have a problem with a few of his lame posts and threads being removed from the forum archive, and I also don't like the idea of multiple log-ins. I've seen multiple log-ins used to intentionally create dismay on forums, but I believe his were trying to hide his faux pas.

shoffer wrote:And here is a question for you - what is the day job of Prof. Salt?

I'm an Associate Professor of Surgical Technology and the Allied Health Department Chair at Del Mar College. I got the nickname as a mix of my day job and my love of paddling in the salt. For the record, I'm not AI or even half robot.

Just so the new guys know.

Thank for staying at home. Improves my chances of[…]

Heard you loud and clear! Thanks for the reminde[…]

Good information for all of us, YakRun. Any day I […]