I have a 13 Fishing Concept Z that I use primarily for bass fishing and a Creed K that was on my poppin' cork rod. I have now moved it to my Waterloo Salinity since I bought a PENN Pursuit to use.

The rest of my reels for saltwater are Shimano and Daiwa. I have a couple Abu Garcia's too that I use for bass fishing but I haven't taken any of them out to the saltwater yet.

I have a current BB1 low-profile reel, Inshore, and Super Duty. The two latter mag-casting-brake models cast lighter baits and deal with wind better than the BB1, IMO.
In the old days, the mag brakes didn't seem to do anything - that's really changed now, the current mag-brake options really make a difference.

My favorite salty spinning reel and biggest bang for the buck is Tica Libra, sold direct by the distributor on Amazon.
Tica USA's service is also pretty good by phone - I've only bought spare spools and made a handle swap on one reel.
I've fished a Tica Cetus for salt XUL (4-lb) for 8 years, and a friend on corpusfishing bought one on my recommendation and loves his also.
Coming from a fly rod, casting spinning tackle will feel more natural to you.
Spinning has the advantage casting into the wind, and fishing lighter and wind-drag rigs. Also casting into the dark when you may not see your lure land.
Baitcasters have the advantage of instant retrieve, especially throwing weight in shallow water.
It's not a bad idea to take out one of each and have each rigged with what it fishes best. 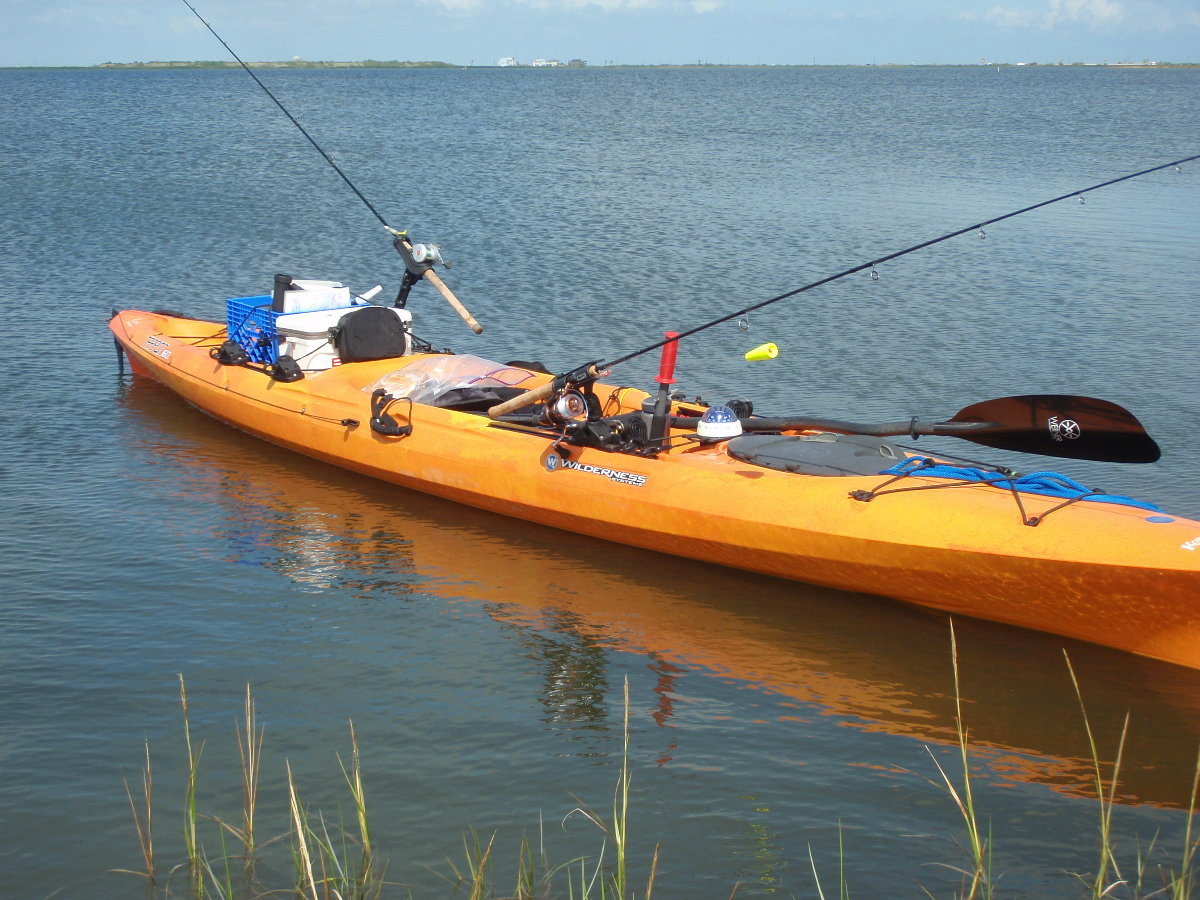 Ron, that Custom inshore uses both centrifugal and magnetic, but yes, you are spot on, it's a great little reel.

I like my team lews lite and will probably get a couple more this year, they are lighter and smaller and fit my hand really well.

Shimano Chronarchs are still good little reels, they kept them higher quality, and I've thrown a buddies Concept Tx and it was good. I still like my lews over the other tho.

In the early 90s gave my dad the first mag Lew's, BB-1LM, and I could never tell a difference with the mag adjusted from zero to full.
With the new mags, you can spin the empty spool and see the effect of even one notch on the mag control.
And that next notch will make a pending backlash disappear on the next cast.

Me and Lew's go way back, not shown here is another BB1-NG marked Browning
Disengaging the flier during casting, the larger diameter narrow spool combined to make Lew's a clean sheet of paper, kinda like Abu was in the 50s. 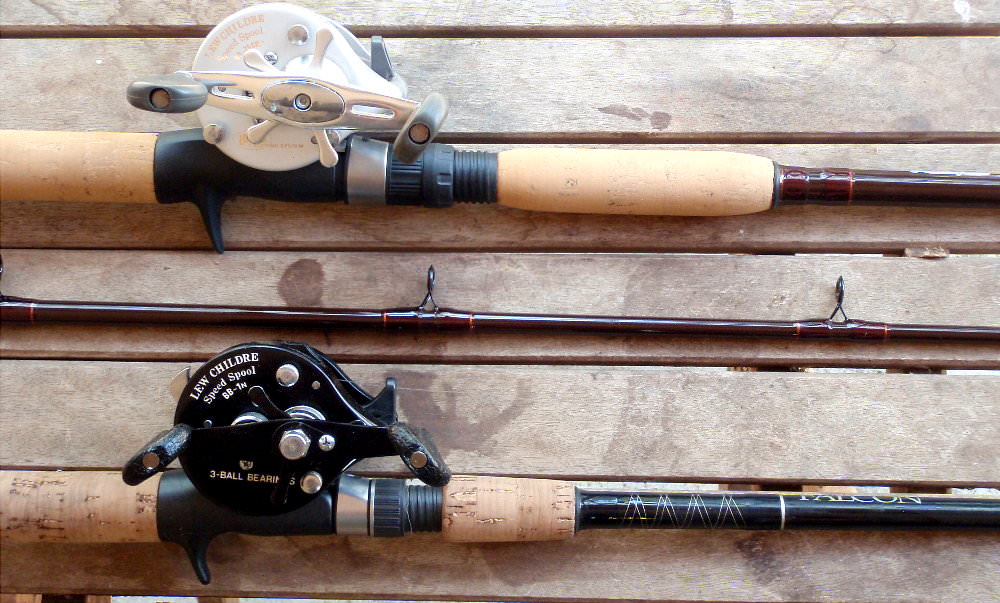 Seriously. I thought I was the only Lews fancier. I still have the Lews that I bought in 1972 (there about) when I was surf casting big shell for trout and smacks. Haven't used it in many years, but I do clean and oil it occasionally.

Somewhere along the line, I moved strictly to spinning and fly. I do spin fish when it's impossible to fly fish. Too many advantages to my preferred fishing methods for using spin gear, as opposed to level wind. And, I do like Penn reels due to their being, in most instances, bullet proof.

Kayak Kid wrote:Ronmc,
What makes you such an expert on reels that I should place any credence in your opinion?

Seriously. I thought I was the only Lews fancier. I still have the Lews that I bought in 1972 (there about) when I was surf casting big shell for trout and smacks. Haven't used it in many years, but I do clean and oil it occasionally.

Somewhere along the line, I moved strictly to spinning and fly. I do spin fish when it's impossible to fly fish. Too many advantages to my preferred fishing methods for using spin gear, as opposed to level wind. And, I do like Penn reels due to their being, in most instances, bullet proof.

um, they work better than this one and are a better buy - the Douglas patent level wind anti-reverse + freespool Supreme was $28 in 1922 ($420 in today's dollars, and this reel is still worth just about that). 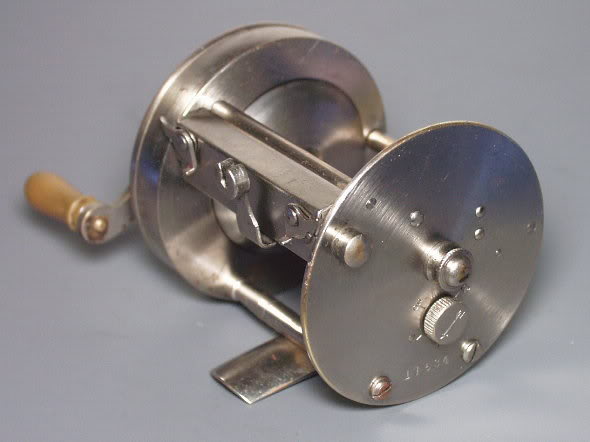 though I was floored when I cast this mid-30s Meek No. 30 LW (expired Marhoff patent and Horton craftsmanship)- it casts 3/8 oz almost as far as one of my Lew's - the casting brake, though touchy to adjust, works amazingly well especially for the mass of a nickel-silver spool. 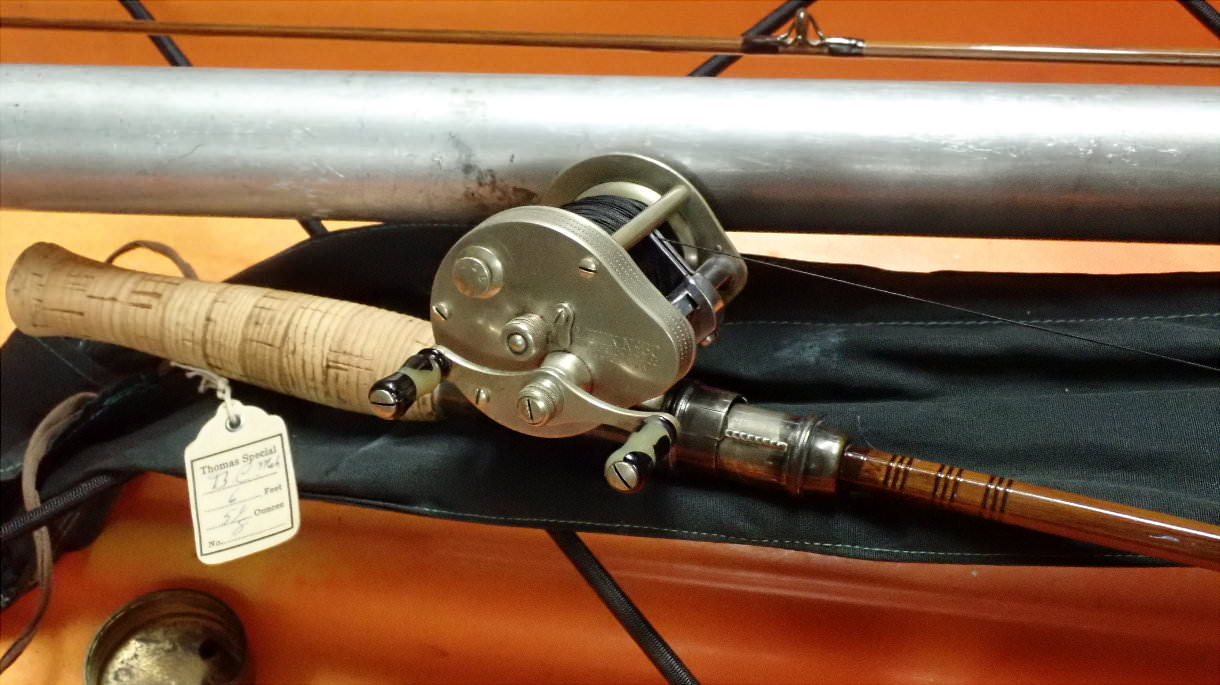 and here's the cast Lew's design went back to, Talbot NLW (both rod and reel date 1914) - swap the ivory-grasp counter-balance handle for one of the little triangle jobs, and it's still the choice of many tournament casters. 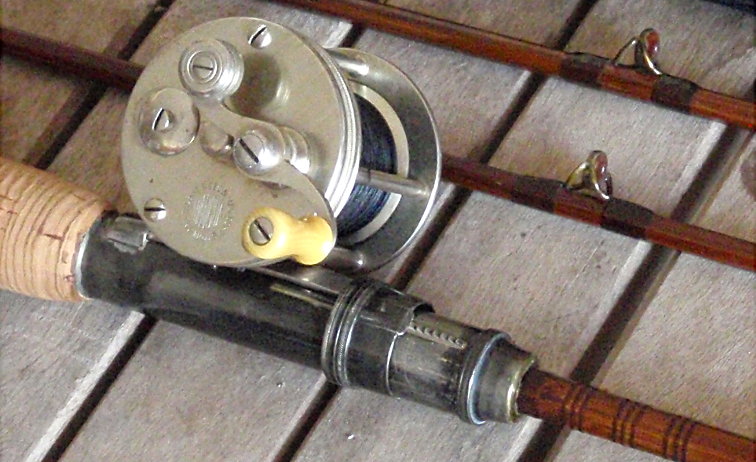 Seriously, they all have their place. No question a fly rod is the stealth champion for standing over fish and sight-casting - honestly, if you're doing it right, they don't know you from a heron. 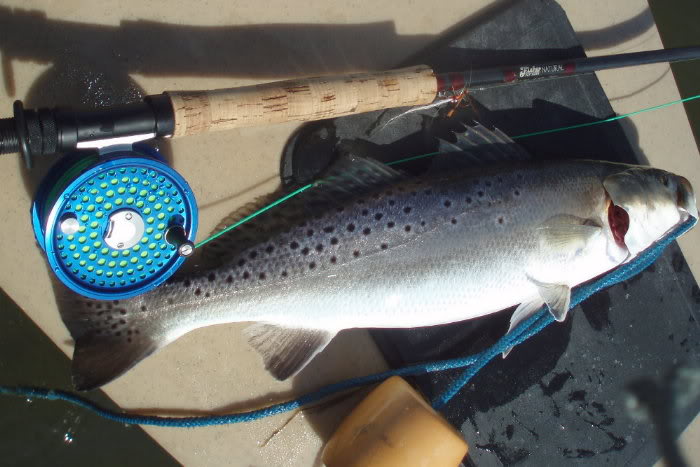 Most salt blind-fishing opportunities are obstinate with a fly rod, the exception being in a high-target probability such a deep narrow pass to a larger channel during a strong tide current, especially with a sinking line - here the Marker 60 pass at LHL on a falling tide. 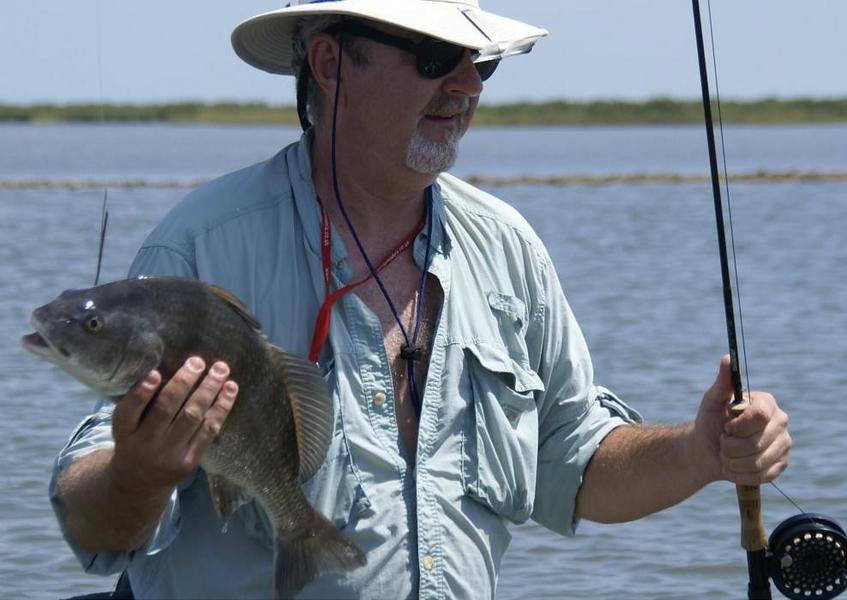 I've mentioned many times drifting S Padre with a slime-line-rigged fly rod in the rod holder. Blind-fishing the bait caster, and switching to the fly rod on fish sign, here at Green Is. 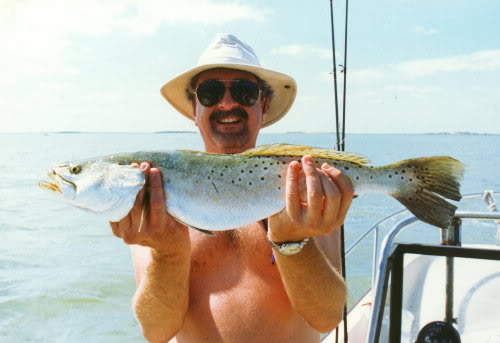 I've retired my 35-y-o Penn 4400SS and 4200SS to loaner service, mostly, they're just not as slick as the new reels, but still work perfectly. Penn are the only reels designed to be ridden hard and put away wet - a guide buddy in the 80s/90s just threw his in the garage at the end of the day, never rinsed or lubed them - he killed his Lew's that way.
When my buddy Lou went looking to set up an inshore spinning rig, he opted for a barely-used 4300SS from ebay.
I still have to break this one out and fish it occasionally... 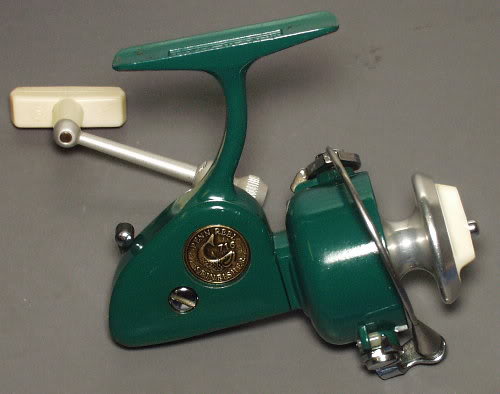 timbo wrote:Which is the best reel for the money. I've been fly fishing in the Smokies and other places for the last 12 years or so and about to move back to the coast. Just trying to get an idea on what reels you guys think are the best baitcasting reel for inshore fishing

Baitcaster for saltwater fishing is a Texas thing. Pretty much everywhere else a spincaster is the go to reel.

By Ron Mc -  Tue May 28, 2019 9:22 pm
-  Tue May 28, 2019 9:22 pm #2286679
not exactly - baitcasters are big in Louisiana, Florida, the Carolinas, and the NE for stripers, as well. I don't know much about west coast fishing, until you get to AK.
13Fishing based in Florida, sells their line of inshore baitcast reels, and offer two models of spinning reels.
http://store.13fishing.com/c/saltwater_reels
Again, the big inshore advantage to baitcasters is instant retrieve when fishing weighted lures in shallow water.
Some people are going to pick spinning reels just because they're simpler to cast than baitcast reels. If you want to cast 1/16-oz, light spinning is the way to go.

Spinning reels are used a lot for offshore jigging, but many people still like their level-wind baitcast reels, even low-profile reels, with big power handles even for offshore jigging - look at all the spiral-wrapped jigging rods made just for baitcasters -
- and especially with modern braids increasing capacity on lighter reels, and carbon drags delivering 20 lbs - most people will never set their drags greater than 5 lbs (which is correct for 20-lb test). 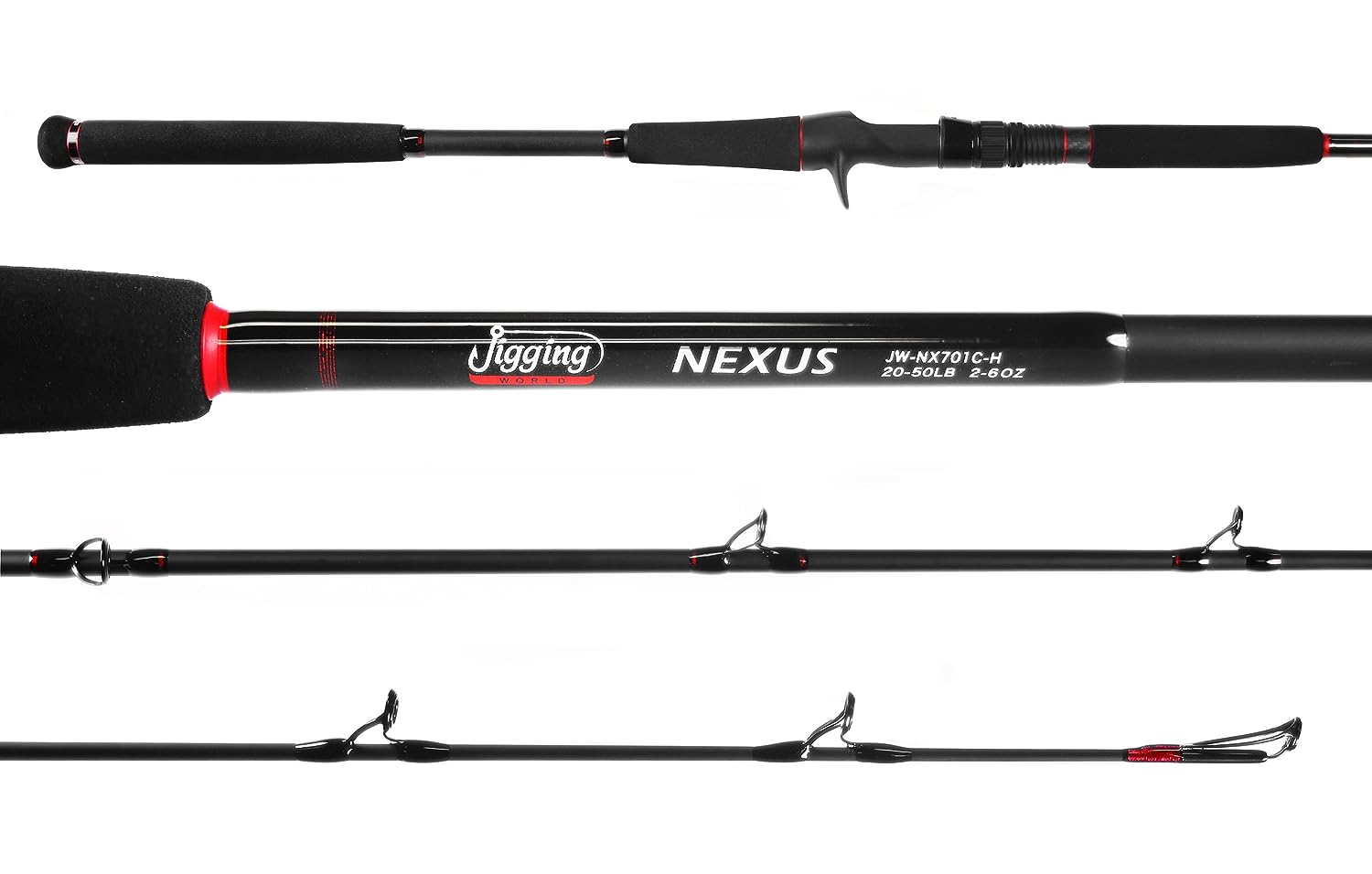 Shimano Tranx with Jigging World power handle - this combination is being distributed by Shimano. 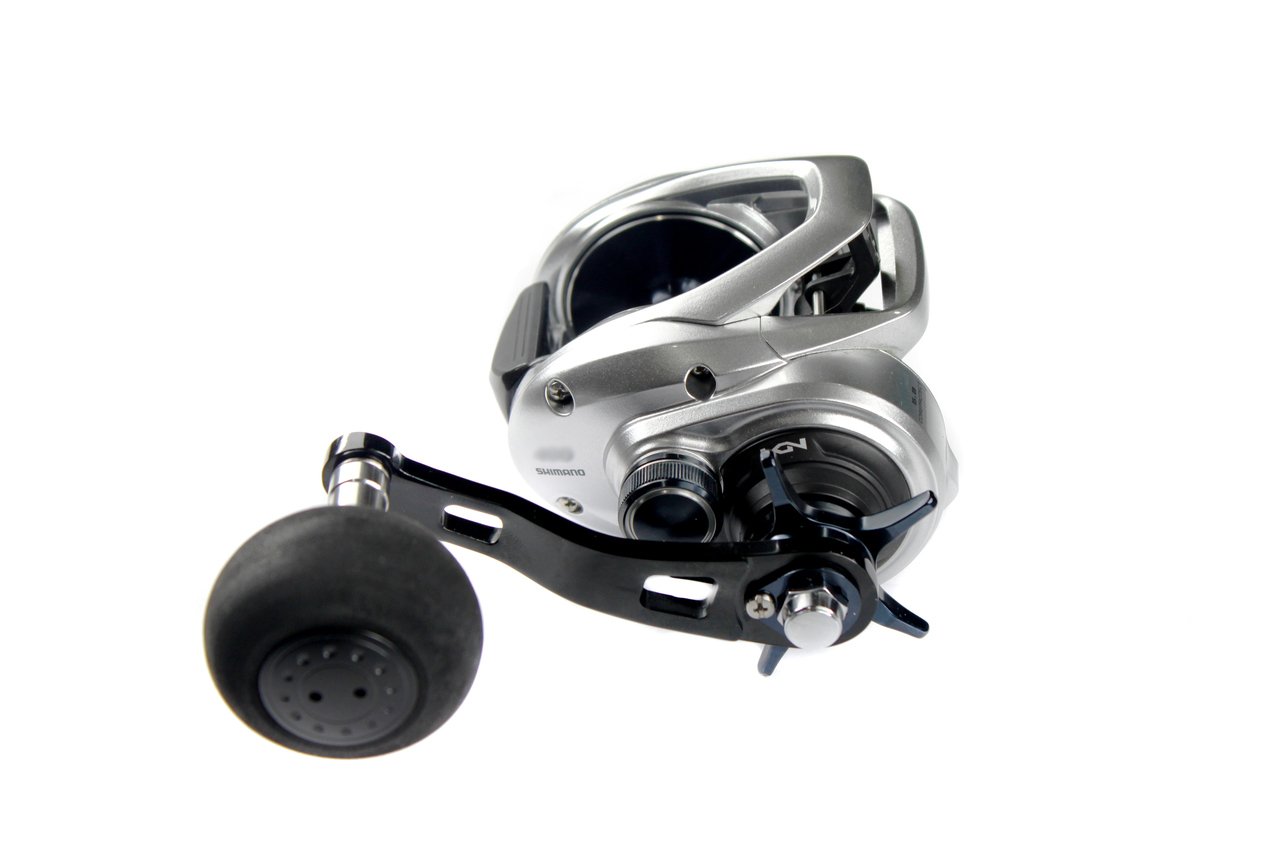 That looks like an awesome deal for the money on […]

Hard core learning! Wat to go. Look at the weathe[…]