I have had two trips in the last month that were each 2 day trips. Both were in the mid-coast region, lots of grass and no small amount of shell. On the first trip, I started out Day 1, as I almost always do, with a topwater bait, as did my buddy. We weren't getting much for bites, a few light blow-ups, so he changed to a Troutsupport lure in Bone Diamond. He almost immediately started catching fish, while I continued toil away in vain, casting my One Knocker to the same places and getting nothing. I finally tied on the same TSL as he, and started learning how to work it. First lesson, slow down and lighten up your twitch to walk these bad-boys..,.way down. Second lesson, they really do go far. Further than I needed in that spot. Third, they are weedless, more so than anything I have ever thrown, including a Johnson Weedless spoon. About the 4th cast I caught a throw back trout. Over the next hour, I landed 7 more trout, 4 of which were keepers and 2 lower slot reds. The fish were all hitting as I walked the bait thru and above thick grass.

Day 2 we went to a completely different area; shell reefs and islands. We saw slicks popping in an area near where I'd fished before, but not in the spot I'd fished, so we did not know what we were looking at as far as structure. It turned out to be a lot of shell and a shell-lined gut between an island and a big sand bar. Again, I started out with a topwater and caught trout. But my buddy went straight to the TSL and, tho he caught fewer trout at first, he started catching bruiser reds. He was working the baits very slowly, letting sink to the bottom and then flush with the tide on his slow jigs. I switched over and we "turned shell" for a couple of hours, yielding 3 reds just outside the upper slot and some nice trout to 3.5 pounds.

Second trip Day 1 was over pretty tall sea grass with potholes. I started out with TSL (I may be old, but I'm not stupid) while my buddy (a different guy) threw another brand of soft plastic. While he stayed busy getting grass off his hook, I kept getting my action down and trying various retrieves (I have not found a wrong way to work them, except for not having them tied on). We finally waded into some fish and I caught three trout 17"-18" in about 20 minutes and threw back another 7 or so trout that were right at 15." My buddy finally tied on a TSL and missed a few hits before he started cranking down and yanking hard and he caught a few keeper trout before we got pushed off the water (storm) so we came up short of our limits, but when we were in the fish, they were knocking the daylights out of the TSL.

The next day we fished with a guide. When we got to our first spot, the guide put on a topwater, as did my buddy and I. This water was prime for topwater and they'd done well there a few times in the previous week. Problem was floating grass. The guide laughed it off as "the cost of doing business." I switched immediately to a Chicken on a Chain TSL and started working it just under the surface over grass beds right up against the shore. That is where the trout were. Before either of them had a bite, I had two 18" trout on the stringer - less than 3 casts apart. I caught several other throwbacks and 3 reds just under the slot before the early bite shut off and we relocated. Before we got out of the boat on our second wade, I handed the guide one of the Chicken on a Chain TSLs already rigged and told him how I was working it. My buddy tied one on too. Over the next 2 hours we caught countless trout, with 8 being keepers, 10 or so reds just under the slot and 2 of our trout were 22"& 23"

Overall, I am very pleased with these baits Tobin has worked so hard to create and bring to us, the angling public. I think it is a game changer for certain conditions and on a level playing field in several other conditions. Grass and potholes - CHECK. Floating grass clogging all of your other lures - CHECK. Hard shell - CHECK. Casting Distance - CHECK (casts like a 1/4 oz jighead but sinks slower than a 1/16 oz jighead). Hookset - CHECK. Tobin recommends you wind down when you feel the bite and then cross its eyes. Although I have dome that, several times it all happened sop quickly, I just reacted and set the hook and it hooked up well. The extra wide gap swimbait hooks I'm using from VMC (4/0 weightless) are ready to go; no bending needed to supertune them.

Walk it near the surface, walk it along the bottom, bump it on the bottom...do anything you want. The guide was just popping it once hard and letting it fall while he cranked in the slack. The reds seemed to love that action. He must have hooked 8 reds in 2 hours.

I realize a lot of you are already buying them and maybe even using them, but I want to say this. On the second trip, I was with a buddy that didn't really have confidence in them and kept going back to his comfort baits. I kept telling him to give them another try. When he finally landed a 22" trout that weighted 3.5 lbs (freaking football of a trout) on the TSL, he finally started believing. For the rest of the day, he continued to catch fish on them. The guide on that day will be ordering a few packs if I had to bet (I gave him one bait in each color and a couple of hooks).

I will still throw my other baits, but I now have a great new weapon added to my arsenal.

Are TSL's sold at retail anyplace?

Yaklash wrote:The guide was just popping it once hard and letting it fall while he cranked in the slack. The reds seemed to love that action. He must have hooked 8 reds in 2 hours.

Reds apparently like this action -- when lure glides towards the bottom. I observed the same with Norton eels in 2-4 fow -- you twitch it and slowly reel in for 2-3 seconds until lure hits the bottom, most bites were during 'glide' stage. With TSL it is even better -- since lure isn't weighted, it glides down longer and more natural.

TSL is an excellent lure for shallow water.

Cuervo Jones wrote:Very strange. In Tapatalk, all I see is this: 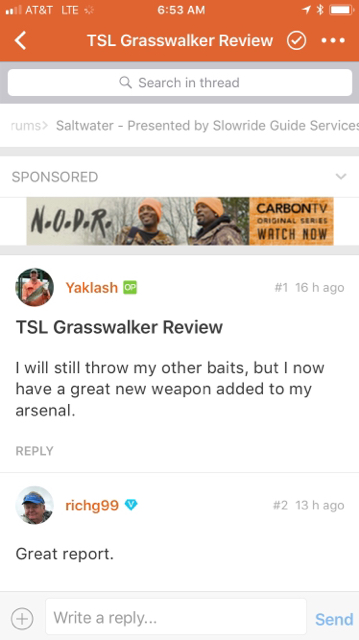 But there’s obviously more to the write up as seen in the quote by Crusader.
What gives, TKF?!

I'm going to order some as soon as I can make it back to Rockport for fishing.

By Ron Mc -  Tue Oct 24, 2017 7:03 am
-  Tue Oct 24, 2017 7:03 am #2249149
Sounds like a great lure, and not to detract from your thread and good review, but adding an incidental report here.
Last weekend, for the first time, rigged my first-time coast-fishing buddy with a TTF Shiney Hiney popping cork shrimp lure.
We were drift fishing the big tides.
Gave him the simple instruction of how to click it and let it sink, take up the slack and do it over. That combined with Procure shrimp gel, every few casts, he got the most keeper reds of anyone in the group.
I tried the same lure awhile, caught tourist trout and had rat reds chasing it, but it seemed every time it hit the water, whatever fish was around attacked it.

By Drifting Yak -  Tue Oct 24, 2017 8:52 am
-  Tue Oct 24, 2017 8:52 am #2249158
Nice review of Tobin's new lure there Yaklash!
A few of questions:
(1) How did the lure hold up? That many specs would buff up the lure for sure - and reds would put a pounding on them - not to mention the fact that the lure will slide down the hook upon setting the fish. All wear and tear.
(2) You mentioned Bone Diamond and Chicken on a Chain. Any particular reason why you switch colors?
(3) Have you tried using belly weighted hooks? Would see why you wouldn't use them in most situations but have found that it helps keep the bait upright, especially when walking the dog (acts like a keel).
Thanks!

Drifting Yak wrote:Nice review of Tobin's new lure there Yaklash!
A few of questions:
(1) How did the lure hold up? That many specs would buff up the lure for sure - and reds would put a pounding on them - not to mention the fact that the lure will slide down the hook upon setting the fish. All wear and tear.

I have caught as many as 10 fish on one bait, most being trout from 14-18 inches on one bait, but have caught 7 trout and 2 reds on a single bait. None were horses. However, on the first trip, Day 2 my buddy caught 3 oversize reds and one nice trout as well as a couple of throwback trout on the same lure. There are ways to re-set the hook that can extend the baits life even more - cut about 1/8" off of the nose, re-install the screw-keeper and then re-stab the hook. And yes, they get fuzzy after a few trout, but still hold the hook and still catch fish.

Drifting Yak wrote:(2) You mentioned Bone Diamond and Chicken on a Chain. Any particular reason why you switch colors?

I have used those two colors as well as the Golden Roach. Based on light conditions, water clarity and depth.

Drifting Yak wrote:(3) Have you tried using belly weighted hooks? Would see why you wouldn't use them in most situations but have found that it helps keep the bait upright, especially when walking the dog (acts like a keel). Thanks!

I used the weighted VMC Swimbait hooks this past week. The guy next to me was getting more hits with a weighted hook so I switched over. Basically it was to be able to work deeper with a relatively quick, walk-the-dog retrieve. I have not found that the TSLs spin like most soft plastics on standard jigheads. I am careful to get the hook centered up and straight, but I think just the weight of the wide gap hook keeps it upright.

Holla if ya'll need anything.

You are setup with that skiff. That Xi5 with the[…]

the thing about winter fishing, you don't have to […]

This post this time of year had me scratching my h[…]